Film Screening: Let It Be Law 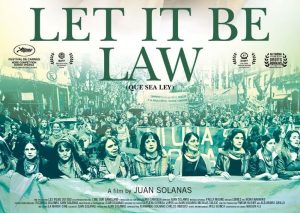 This powerful film documents the massive organizing that occurred in Argentina predominantly by women as they challenged their government and church to pass free, legal, and safe abortion laws across the country. For seven years they persisted until abortion became a national right.

Here in the USA we need to gather and organize the same energy to defend the right to abortion and full reproductive freedom. Representatives from the National Mobilization for Reproductive Justice will speak in discussion about current militant organizing to defend Roe from the right wing and SCOTUS.

Film showing at 7:00pm, discussion to follow. Snacks and drinks available at 6pm.

Also screening online:
Click here to join us via Zoom