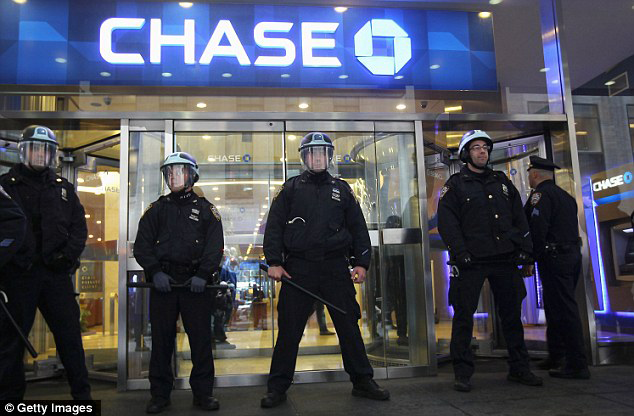 Police stand guard against Occupy Wall Street and union protesters on May Day 2012.

Five hundred years before Michael Brown, Eric Garner, and Tamir Rice were murdered by police, white men in the colonies were hired to catch runaway slaves.

They were the first police force in what became the United States. Native Americans had no armed agents directed against their own people.

But one thing has not changed, and that is their role in society. Whether operating in plantation chattel slavery or capitalist wage slavery, the police are there to protect the owners and keep the exploited and oppressed in their place.

Protect and serve the 1 percent. When the bulk of the workforce consists of Black slaves, it is easy to see that police — slave catchers — work for the bosses —slave owners. Following the Civil War, with industrialization spreading across the northern cities, police were poised against factory and mine workers. It’s easy to see the same role of the police there too.

Every strike for higher wages and better working conditions brought out the police, not to arrest the owners for imposing unsafe work environments and poverty wages, but to shoot workers on the picket line and protect the scabs crossing them.

Such was the pattern across the board. Police attacked West Virginia railroad workers in 1871 and Pittsburgh steelworkers in 1892. In 1898, the Chicago-Virden Company armed the police to attack striking Illinois coal miners. In many of these battles, the racist bosses brought in desperate southern Blacks as scabs.

An exploitative system, by definition, requires an armed force to protect ill-gotten riches and maintain criminal oppression. In a truly democratic system, the tiny minority of owners would be out-voted in a minute.

Racism and capitalism. The Civil War may have technically ended slavery, the Civil Rights movement may have curtailed Jim Crow segregation, and the election of a Black president may have broken into the whites-only White House. But none of these ended racism.

Racism persists because the bosses’ system needs it. It keeps the oppressed divided. A united working class spells much more danger to the bosses’ rule.

That’s why police occupy the communities of Blacks, Latinos, and Native Americans, but not Beverly Hills or Scarsdale. It’s why they patrol the halls of poor public schools but not those of private schools for the privileged.

The bosses grant themselves the right to protect their system by any means necessary, and that includes giving the police license to kill. Police officers are rarely brought to justice.

We’ve all heard the usual rationalizations. The victim of police abuse must have done something to deserve it. But the real crime is the social crime of unemployment, dilapidated housing, crowded classrooms, and inadequate health care. What they call “street crime,” however tragic, is a social reaction to the bigger crimes of capitalism.

The police and courts are the enforcers of sexism as well — indeed of all the discriminatory “isms” that the status quo depends on. To name just one example, the militant, lawbreaking movement for women’s right to vote was viciously attacked by the cops.

Marxism and the State. History thus shows that the police are not neutral and never have been. It will not do to dismiss their brutality as the action of a few bad apples. This typical excuse just doesn’t stand up — are there any bad apples shooting the bosses?

Marxism explains why the police take sides. It explains the historical origin and function of the police as an armed state force in society directed against a portion of its own population, in order to serve and protect those who own the major economic means of production — plantations and agribusiness, factories, mines, information technology, energy and electronic commerce corporations, etc. In this capacity, their job is to keep the workforce intimidated, obedient, and subservient. And that includes murder.

In his masterpiece The Origin of the Family, Private Property, and the State, Karl Marx’s collaborator Frederick Engels observed that the Iroquois had “no soldiers, no gendarmes or police.” This communal, not class-divided society also had “no nobles, kings, regents, prefects, or judges, no prisons, or lawsuits.” In other words, they had no state.

The Russian Marxist and revolutionary leader Vladimir Lenin characterized the state as “the product of the mutual antagonism of economic classes.” Explaining the domination of a minority over the majority, Engels wrote that “the state allows the two contradictory classes to persist, one ruling the other.”

The police apparatus permeates cities and states. Thus, the FBI murdered leaders of the Black Panther Party and the American Indian Movement when they organized to end racism and discrimination. The National Guard was called around Freddie Grey’s murder. U.S. border police stalk Central Americans.

Should these police tentacles not spread wide enough, the bosses rely on extra-legal thugs, like the racist Ku Klux Klan and anti-abortion bigots. And when their system is truly on the brink, as it was in post-World War I Germany, heavy industry companies like Krupp Steel arm the fascists to murderously counteract workers’ resistance.

What to do. There will be no end to police brutality until capitalism is replaced. In the meantime, the power of the police must be militantly and steadfastly challenged.

The demand for civilian control over the police through elected review boards, independent of city politicians, is gaining a wider hearing. To participate, get in touch with the FSP branch in New York City which is working on such a campaign.