After months of mobilization by housing activists, the Seattle City Council took a tiny step toward addressing the city’s spiraling homeless crisis this spring. It unanimously passed an ordinance leveling a small tax per employee, called a “head tax,” on the city’s biggest businesses. The money would have built housing and funded services for Seattle’s poorest residents.

Uproar ensued. Even before the vote, tech giant Amazon shut down the construction site of its new office building, locking out hundreds of construction workers. Their union obediently declared opposition to the tax, sending members to storm city hall.

The measure was rebranded a “tax on jobs.” It was first cut in half, then repealed. Now activists must regroup to fight the most regressive tax system in the country, which charges the poor proportionately over five times more than the rich.

Cynical political theater. This pitifully small tax affected just 3 percent of the city’s businesses — those taking in over $20 million a year. 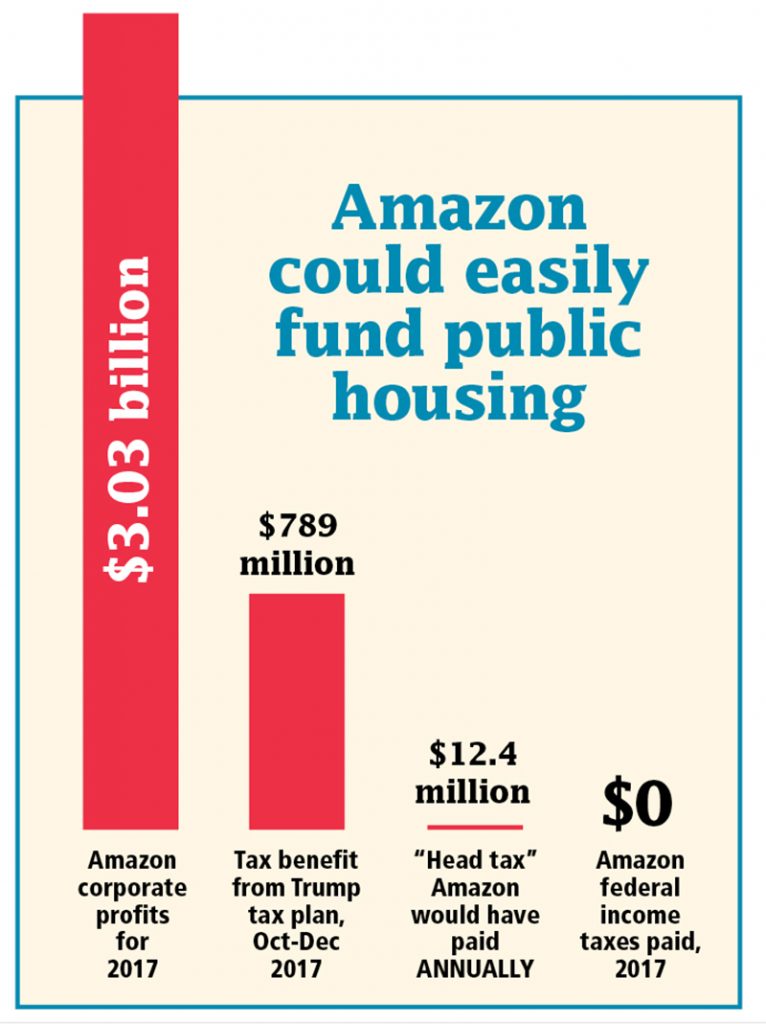 No sooner was it passed than the mayor threatened a veto unless the council cut the tax and made it temporary, citing third party assurances that Amazon would approve. The council complied, unanimously.

The reduced tax would have been $275 per employee yearly. This translates to $1.05 per full time employee per working day, far less than most workers spend to get to the job. It would have raised $47 million dollars a year, only about ten percent of the amount required to address the needs of the region’s homeless. A small but forward step.

Before the ink was dry on the “compromise,” Amazon and other big businesses funded and promoted a repeal referendum. Rather than mobilize a defense, Seattle’s council raced to undo the tax, on a 7-2 vote, apparently violating the state‘s open meetings law in the process.

Supporters of the tax were now ignored. So was the reality that Seattle is the fastest growing U.S. city, fueled by a tech boom that Amazon and related companies caused. This expansion will require new schools, transportation and infrastructure to serve the businesses’ employees. The tax was an entirely reasonable mitigation fee for the social costs of the companies’ own growth.

Some council members worried publicly that Amazon would fund Republican candidates for the state legislature and cost the Democrats their majority. So? History shows that the free ride for the rich is a bipartisan creation.

Billionaire tax haven. Washington state has the most upside down tax code in the U.S. People making under $21,000 per year pay 17 percent of their income in state and local taxes on average. Those who make over half a million dollars pay less than 3 percent.

For agribusiness, crops, cattle, nurseries and equipment are exempt from state property taxes. Growing and harvesting crops is exempt from the business and occupation — B&O — tax too. Production and sale of dairy products and most seafood is excluded.

Aerospace giant Boeing got the biggest tax giveaway in history from the legislature in 2013 when it threatened to leave the state. The concessions of $8.7 billion through 2040 helped Boeing build a non-union plant in right-to-work South Carolina. Big businesses like Amazon, Boeing, Microsoft and Starbucks pay hardly any taxes. Neither Boeing nor Amazon paid a dime in federal income tax in 2017 either.

Meanwhile, the entire state budget for schools, infrastructure, and public services is funded by sales taxes on everything but food — and an ever-growing property tax burden on homeowners and renters. Local city and county governments, school districts, transit and water systems, parks and recreational facilities all rely on property tax levies and additional sales taxes for anything the state doesn’t fund. Seattle’s taxes are the highest in the state.

This regressive system has been in place for decades and has faced no serious challenge from Democrats or Republicans. Democrats usually controlled the legislature and the last Republican governor was 33 years ago.

The homelessness crisis. Seattle is the poster child for the homeless crisis that engulfs most U.S. big cities. It has the third largest homeless population in the country, behind New York City and Los Angeles. Of its over 12,000 homeless, 58 percent are people of color, although they are only 21 percent of the total population. The city’s percentage of shelterless people is the highest in the country. In 2016, 3,612 homeless kids went to Seattle schools.

The reasons mirror those around the country. Washington is one of 39 states that prohibit rent control. A bill to repeal the ban died in committee last session, despite a Democratic legislative majority and a Democratic governor. Seattle rents, 80 percent higher than the national average, have soared 65 percent in the last decade alone.

City government regularly approves the destruction of public and low-income housing to make way for private development projects. The influx of mostly well-paid tech workers fills up the available housing stock and prices for homes and apartments climb. Soaring property taxes force many working-class homeowners out of the city.

Working-class solutions. The problem is fundamentally national, caused by years of cuts in federal funding for public housing. But there are some unconventional fixes. However, no politicians on either side of the aisle are even raising them. It would upset the balance of power and campaign contributions.

Statewide rent control, accompanied by a moratorium on evictions and foreclosures, would provide immediate help. A steeply graduated income tax to fund housing and services, elimination of the sales tax on anything but luxury goods, and cheap and effective transportation to get to jobs are all doable. Seattle can exercise eminent domain to take abandoned buildings and rehabilitate them for housing, offering homeless folk the chance to work on them. It could do the same with vacant public buildings.

None of these reforms will become reality by relying on capitalist politicians who created the situation. Only a broad movement of working people, housed and not, can win some relief. It is time to get started rebuilding that force.