An unflinching fable about slavery and race

Time-travel back to the mid-1800s — for a contemporary school project on the lives of slave women. … Come again?

Don’t let the premise throw you. The Unexpected, by Helen Collier, sneaks up on the reader in the way that thoughtful science fiction does. It takes you out of your reality and puts you in someone else’s. This book serves up a dose of fantasy and magical realism that delivers hard truths about racism and the legacy of slavery in a digestible manner.

Confronting racism. The story begins as Dawn, a white woman, and Tony, a Black man, agree to a college debate on the experiences of Black women under slavery. Dawn is unconscious of her privilege, ignorance, and casual racism. But she learns.

As in other writings by Helen Collier, a fantastical role is played by Meow, a time-traveling alien in the form of a large blue Louisiana catfish.

Meow whisks Dawn to a Louisiana cotton plantation in 1842. There she spends one week with May Bee, an enslaved young mother who is the only one able to see or hear Dawn. 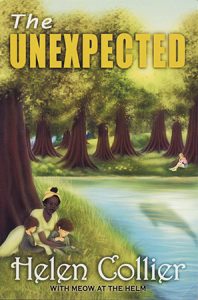 Meow challenges Dawn to not only observe the situation, but feel what May Bee feels. She accepts, not out of empathy, but for “the thrill of having the best report” when she gets home. In return, Meow charges Dawn with saving May Bee’s two babies from getting sold off to another slave owner. Dawn has no idea what she has gotten herself into. She has a long way to go in a short period of time. But with some surprising twists in the road, she gets there.

This isn’t Disney. There are no happy Black folks working in the fields by day and going home to their families at night. Life is pain, exhaustion, starvation, rape, danger and degradation.

The slave women work from sunrise, or earlier, to nightfall. And they are expected to provide their bodies to their masters on demand.

Through Dawn and May Bee’s emotional and physical connection, we feel the trauma. This could just leave the reader horrified and depressed. But The Unexpected doesn’t stop there. It pushes through to hope, love and resistance.

A story of relations. Collier crafts fragile scenes of May Bee with her babies. Of May Bee and Dawn talking, trying to understand each other’s realities. Of slaves resisting in ways large and small. When the mistress of the house, looking for stolen food, demands May Bee turn out her apron pockets, the other slave women protect her by passing the food-laden apron among each other.

Collier shows the power differences between the poor white overseer and the rich plantation owner. She highlights the role of white mistresses who aided and abetted the dehumanization of slaves. Collier underscores how relations between people — white women and white men, Black women and Black men, white and Black women — were warped in different ways by slavery and how some of these distortions remain in force today.

The author often raises more questions than she answers, but that’s okay. She lets readers draw their own conclusions.

One thing that comes across clearly is Collier’s belief in the power and necessity of Black women and white women working together for humanity’s survival.

Eventually, Dawn returns to the present to give her report. Her classmates are floored when she states, “There is no such history as Black history in our country. … Everything that has occurred in this country is every American’s history — good and bad. It’s about us as a people and the choices made by our ancestors hundreds of years ago. Those choices and decisions have brought us to the present day.”

Fearless vision. Collier is fierce in her beliefs. She boldly presents her unconventional visions, as she does in her four other books.

Her voice is that of a working-class Black woman from East St. Louis, someone who may not have received much encouragement to write or tell her truths, but who was compelled to do both. And you can’t help but listen. Agree with her, or don’t. But Collier is going to challenge your assumptions.

The Unexpected is a real page-turner, with a story that remains in the mind long after the cover is closed. In the end, it’s a tale of resiliency. Of Black and white women affecting each other’s lives. And of the need for them, and us, to work together to create the kind of world in which all can thrive.

Viggiani is a lifelong fan of science fiction and fantasy. Send your questions and ideas to FSnews@socialism.com.