Across California, over 1,500 inmates are out of long-term solitary confinement — that’s 10 years or longer of mind and body destroying isolation. In the year since the historic legal settlement was signed, the long-term solitary population at California’s Pelican Bay State Prison alone has dropped by 99 percent, from 513 to 5. 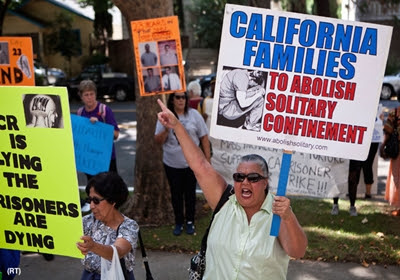 This victory was won by the prisoners themselves, beginning with a lawsuit filed by two inmates in 2009 (Ashker v. Brown). Six years of organizing encouraged others to join the suit. There were three successful hunger strikes, which brought some small reforms and much-needed public scrutiny.

Finally the court case ended with inmates negotiating the terms of the settlement.

One of the hunger strikes in 2013, started by inmates in solitary confinement at Pelican Bay, grew to 30,000 prisoners at two-thirds of California’s prisons. (See Prison abuses rooted in slavery.)

Pressure from families, supporters and the general public grew with the increasing exposure of the torturous conditions inmates endured during decades of solitary detention. The settlement brought thousands of people out of 9 by 12 foot concrete bunkers into daylight and human contact — some after 20 or 30 years of damaging isolation.

Thousands of incarcerated men and women across the United States continue to face inhumane treatment for supposed “gang identification,” petty crimes against property, or drug use. This victory in California is a model for all of us and shows that uniting across race divisions by using our bodies or withholding our labor is the strongest way to fight for human rights and freedom.