“They ran on fear; we ran on belief in the potential of the working class” 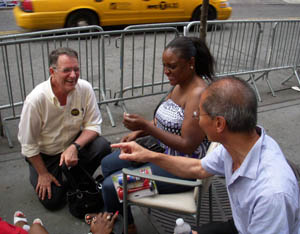 
It doesn’t take a rocket scientist to see that we live in a deeply destructive world. The way I see it, we’ve got two basic choices: duck and cover in fear and despair, or build a bold fight-back for radical change.

When the Freedom Socialist Party (FSP) in the U.S. decided to run a 2012 presidential campaign, I thought it was a great idea. It didn’t occur to me that I might be FSP’s presidential candidate.

What an awesome journey it’s been! I met so many people who are thoughtful about issues, working hard for causes bigger than themselves, and open to new ideas. It verified my belief, and the party’s belief, that the U.S. working class is capable of great things.

Socialist? Right on! I was proud to be running with vice-presidential partner Christina López. In our very grass-roots campaign, Christina and I and our supporters talked to thousands door-to-door, in coffee shops and neighborhood bars, and at street festivals and political protests. We got the word out at labor conventions attended by over 11,000 unionists.

Everywhere, when people asked me, “You’re running for what?” and I’d answer U.S. president, they said, “Hey! Good luck!” On a radio program called Gay Spirit in Hartford, Conn., the interviewer exclaimed in surprise, “You’ve said everything I’ve wanted to hear.”

It was great to be a multiracial feminist team delivering the message that if you’re not changing conditions for people on the bottom, you are not advancing justice or revolutionary change. Racism and sexism are fundamental weapons of the ruling class, and they were also the fuel of fear that many mainstream candidates ran on.

It was striking to see the sudden attentiveness of undocumented workers as we said they should have the right to cross borders for jobs, and to vote here. And to witness the curiosity young people showed about our ideas, from teens in middle school to 20-somethings old enough to have voted for Obama in 2008. In fact, young people’s enthusiasm propelled our campaign from start to finish.

Looking ahead. Our campaign gave voters a radical, inclusive platform worthy of their vote and a way to protest rigged elections. It also promoted the cause of cooperation among socialists.

To its credit, the Left survived decades of harsh assaults after World War II, including McCarthyism. But today it is small and fragmented.

Christina and I were a consistent voice for socialists getting together in united efforts. But we also answered the question, “Why isn’t there just one socialist party?” Because, we said, there are some serious political distinctions among left parties. Plus, unfortunately, there’s a good deal of sectarian behavior; fighting over issues is one thing, but fighting over status is another.

And supporting a political gadfly like comedian Roseanne Barr in order to sabotage other socialists, as the Party for Socialism and Liberation (PSL) did in California, is completely out of bounds. We further took issue with PSL’s support for Syrian dictator Assad (although we too condemn imperialist intervention). We also explained our differences with reformist groups like the Green Party, which, for example, doesn’t denounce Israel’s occupation of Palestine.

On the plus side, I appreciated that Socialist Party presidential candidate Stewart Alexander offered me opportunities to speak alongside him, even though our two parties also differ in some fundamental ways.

U.S. working people don’t have a mass labor party, and there’s no question they could benefit from one — if it was truly independent from Democrats and Republicans and willing to indict capitalism. But a labor party is no substitute for a revolutionary party.

Christina and I tried to explain and show by example what a revolutionary party is. A vanguard party, we said, is a group of people who believe in socialism, take initiative in the struggles of workers and the oppressed, and study history and theory in order to effectively act in changing our world at its roots.

Several new members decided to join FSP in the course of the campaign, which is extremely heartening! I have high hopes that this will be just the first step for the party in new growth and taking up new battles, with the ultimate goal of putting the working class in power. I can’t wait to be part of what comes next.

“People are looking for alternatives” 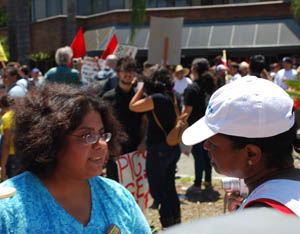 On July 29, 2012, López discusses the campaign at a rally
against police brutality that followed the
vicious shooting deaths of two Latino youths by
cops in Anaheim, Calif. Photo credit: Doug Barnes / FS


One of the things I learned by running for vice president is this: people understand that the policies of the Republicans and the Democrats are not going to solve the economic crisis. Which is logical, because these parties take their marching orders from the banks and corporations that created the crisis.

My presidential running mate Stephen Durham and I got a lot of support, but I’m sure many people we talked to voted for Obama, because they saw him as the “lesser evil.” That doesn’t mean they are satisfied with their alternatives, however. They’re not; they want other options and they’re excited to hear about them.

Some are interested in the Libertarian Party, because there’s such fierce propaganda that government is evil, and the libertarians go to town with that. People don’t always realize that the basis of libertarian thinking, “let the market rule,” is right-wing, with disastrous consequences for immigrants, women, and others. Unfettered capitalism is the problem, not the solution.

I and my party, the Freedom Socialist Party (FSP), don’t want Wild West capitalism. (Or a mythical “kinder, gentler” capitalism, for that matter.) Depending on whose class interests government represents, it can be a major force in helping people to survive and better their lives. That’s the kind of government we want to be a part of bringing about, and that’s why it was so important that we were out there this election with our socialist message.

A world of opportunity opens up. We talked to people on campuses, at demonstrations, in front of Walmarts. A lot of people at Walmarts gave us the thumbs up! What made it easier for us as socialists is that the mainstream politicians mostly ignored the issues that people care about — tuition hikes, budget cuts, war. (Except for when they were calling for more!)

The problems people of color face disproportionately, like poverty and prison, seemed to come up only when the Republicans used them to rally the racists they see as their base.

As for women, Democrats were happy to score points because of the disgusting things Republicans said, especially about rape and abortion. But look at the Democratic record on reproductive rights: it’s one horrible compromise after another.

And, of course, all of the issues affecting people of color and women affected women of color the most, from voter suppression and unequal wages to access to abortion. There really is a war on women, and the heaviest artillery is aimed at women of color.

What all this meant is that when we talked about the problems of workers of all colors and genders, but especially those who are most exploited and oppressed, people were eager to listen and to share their own experiences and opinions.

I found it fascinating to travel and see the leadership of women of color in action, from the young students fighting for ethnic studies in my old home state of Arizona to the farm-worker organizers in my current home state of Washington. I also loved spreading the news of their struggles everywhere I went, especially to the high school and college classes I spoke at on both coasts.

Students ask the best questions! Of course young people are known for being receptive to new ideas. I also found that, generally speaking, they are much less invested than their elders in this stultifying two-party system.

Get involved, express yourself! With everyone I talked to, I made the case for getting rid of capitalism.

It’s important to fight for reforms in the here and now, because people are desperate for improvements in their lives. We need truly universal healthcare, equal pay for equal work, and all those other good things.

But I know, in the end, it will take a revolution to get them and keep them. And the first step, I always told people, is for you to get involved, if you’re not already.

We workers and students have much more power than we realize. Common action has won great things for humanity in the past. Now it is up to us to carry that legacy forward, to take it to the next level. We need not just reforms, but a whole new system.

Here I go, I’m taking this slogan back from Obama, who ripped it off from us in the first place: ¡Sí se puede!

Also see: Bringing race and gender issues to the fore

Also see: The $6 billion election that settled nothing