Pioneer tradeswomen who made history against relentless odds

High Voltage Women: Breaking Barriers at Seattle City Light, by labor and community historian Ellie Belew, tells the story of ten women Electrical Trades Trainees (ETTs) and their fight against intense, long-running discrimination at Seattle’s public utility. As a former tradeswoman at Bay Area Rapid Transit, I found the book to be a riveting account of what it’s like for women and people of color breaking into a segregated work force. Their strength, dignity and growing confidence come shining through. 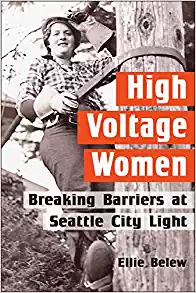 The times were right. The early 1970s were years of rapid social change, a product of the hard-fought civil rights movement of the previous decade. The passage of federal civil rights laws in 1964 and ’68 led to localized mandates to address discrimination against people of color and women.

In 1972, Seattle adopted an affirmative action plan. Clara Fraser, a well-known feminist, community organizer and co-founder of Radical Women and the Freedom Socialist Party, joined City Light’s training department and was charged with designing a program for women. In 1974, the ETTs were hired by City Light with the goal of becoming journey-level electricians.

Almost from the first day, City Light bosses worked to sabotage the program. Plans that Fraser initiated were scuttled. Management preferences overrode training needs. Just as the design neared completion, electrical workers called a wildcat strike over unfair discipline by management. Fraser supported the walkout and urged clerical workers to join in, which they did — shutting down the utility for eleven days!

Fraser’s radical politics and workplace activism earned her management’s wrath. She was removed from overseeing the ETT program and ultimately laid off in a suspicious “budget cut” that involved only her. She sued the city for discrimination on the basis of sex and political ideology. It took nearly eight years to finally win her job back.

The cost of bigotry on the job. Meanwhile, the ETTs had started work.

Meticulously screened by a hiring committee seeking women tough enough to withstand the pressure, it is not surprising that six of the ten had connections to feminist, lesbian/gay, and civil rights activism. Three were members of Radical Women and the Freedom Socialist Party.

Initial conditions were less than ideal. As the author relates, the women were “sent into the field without equipment, work clothing, or most of the training that had been scheduled as part of their pre-placement program.”

And that was only the beginning. All but two of the ETTs were fired before they worked a year. They filed suit with Seattle’s Office of Women’s Rights and won their jobs back eleven months later. Returning to City Light, they fought on and slowly advanced to journey-level status.

The book makes excruciatingly clear that how women fare in non-traditional jobs has everything to do with the degree of support they get from supervisors and upper management. Most City Light crew chiefs did next to nothing to stop the sexist hazing the women faced daily. Nor did they do much to help the trainees expand their skills. This all contributed to an extremely stressful work atmosphere in a trade — from underground vaults to utility poles — that’s one of the deadliest in the U.S.

Job harassment contributed to one of the ETTs, Heidi Durham, falling nearly thirty feet from an electrical pole in 1977. She broke her back and remained disabled for life. But she fought successfully to return to electrical work at the utility, as was standard for injured men. Durham was not the only former ETT who was seriously injured on the job.

Solidarity is key. To survive job hazards, the women learned they could often find support from men of color who were going through similar experiences. The socialist women also participated in their local, IBEW Local 77, to push it forward and demonstrate their commitment to labor rights. Union support gradually grew.

Other tradeswomen were hired one by one over the years. But conditions remained bad and management was always retaliatory. Rather than keeping their heads down, the Radical Women were courageous advocates for women electricians and workers of color. Problems at the utility were exposed publicly in 1983 when the director of the Human Rights Department (HRD) filed his own lawsuit against City Light for systematic, life-threatening discrimination against women.

A new generation of militants. Working with both field workers and administrative staff, the socialist feminist workers formed CERCL, Employee Committee for Equal Rights at City Light, to stand up for workers and press for a satisfactory resolution to the HRD director’s complaint.

For years, CERCL spoke out for female and male workers inside and outside the trades. Its “Ten-Point Plan to Fight Discrimination at City Light,” a side-bar in the book, is a model for workplace organizers.

CERCL paved the way for today’s equal rights fighters, the Seattle Silence Breakers, dedicated to exposing and confronting sexual harassment and racism on the job at City Light and other city departments.

High Voltage Women covers this complex and extensive history without letting the reader get bogged down in details. Author Belew has provided lots of extras like timelines and close-up profiles of the ETTs, so the narrative moves along and keeps the reader wanting to know what comes next.

The book is a handbook for politically savvy organizing. It’s also an inspiring testament to the tenacity, bravery and pure grit of the trainees who stood their ground, did their jobs, and made history.

The new UN climate report is compelling and chilling. But how can we win implementation of the necessary solutions?

Join a June 24 protest to defend the right to abortion!