In defense of rent control 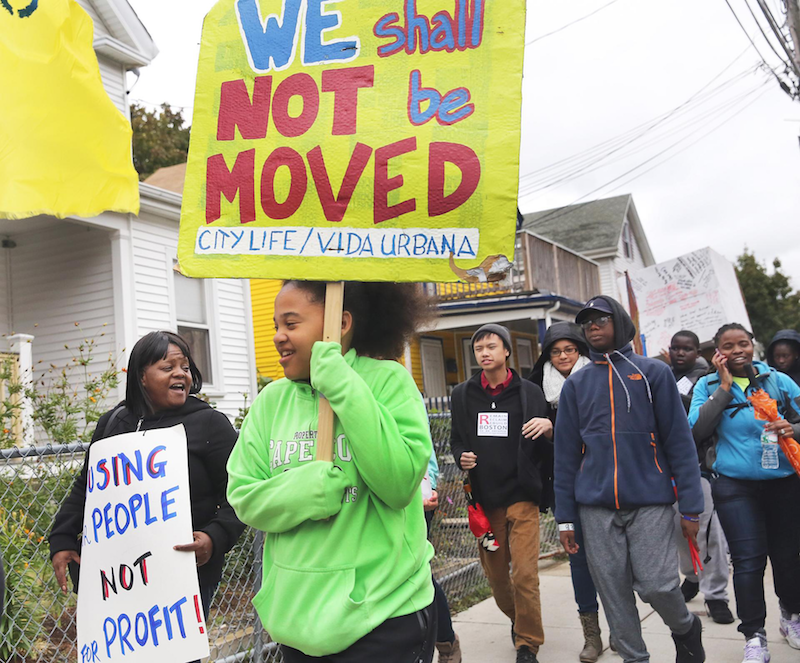 From San Francisco to cosmopolitan New York City, urban tenants are beleaguered by soaring rents and the anxiety of how to keep a roof over their heads. Several generations pack into one apartment or house trying to cover living costs. Tent cities sprout across the country or the homeless seek shelter in overflowing facilities and freeway underpasses. And the working class — an increasingly poor working class — is being forced out of cities to locations with lower rents, far away from their low income jobs.

The “American Dream,” so vigorously marketed by capitalism, promises that home ownership is the road to prosperity and security. This resonates with millions because a stable place to live — and an address — is essential to landing and holding a job. But it is a false dream. High-powered investment firms and developers buy up “affordable” homes and build mansions for the wealthy. High tech companies like Google and Amazon take over entire city blocks and replace apartment buildings with luxury condo sky-rises and office complexes. Huge rents charged to well-paid professionals push prices skyward. The sharks are winning out as the ranks of renters swell.

Housing is a human right. Under capitalism, private property trumps human life. This is especially true in the U.S., where politicians merely give lip service to quality-of-life issues, and ending homelessness. Their platitudes actually mean abusive policing, scapegoating, ghettoizing the poor and homeless — and gouging everyone else.

Rent control traditionally means price controls or a limit on the rent a landlord may charge. It is often accompanied by other protections against unwarranted evictions or slumlords who are operating roach-infested firetraps.

In the book Rent Control: Regulation and the Rental Housing Market, various authors chronicle the long history of rent control in the U.S., dating back to both World Wars, when severe shortages and poor quality of housing created a groundswell of public anger. Radicals and reformers turned outrage into action and won rent control.

In the 1960s, with the rise of powerful social movements, such as for Civil Rights and Free Speech, and against war, the demand for rent control also gained traction, and cities such as Berkeley won strong laws, for a period of time.

But not surprisingly, as soon as laws are on the books, wealthy landlords and developers try to weaken or eliminate them entirely. Yet while these laws exist, they help to create community stability, slow gentrification, and curb unfair landlord evictions and price-gouging. They also curtail the common practice of letting low-income units become fire-prone, roach-infested slums.

New York City’s story. In the Big Apple, a city with one of the longest running records of rent control, laws have varied widely in strength and content. When strong tenant rights movements demanded legislation, landlords were subject to rent freezes or rate increases that matched inflation.

This was the case in the early 1960s, a period of general social justice upsurge. Modest rent raises were allowed if landlords showed that repairs and/or capital improvements were needed. But such hikes had to be approved by government-appointed boards. City measures enforced the quality and safety of rental units. They also protected tenants from unwarranted and arbitrary evictions, including the common, very profitable practice of evicting tenants from low-rent buildings to convert to high-priced condominiums or luxury apartments.

During the 1970s, landlords and real estate moguls counteracted these gains. The state legislature put restrictions on what cities could do and New York City lost thousands of units as developers succeeded in weakening the strict rent regulation in favor of so-called “self-regulation” by the real estate industry. A scenario akin to the fox watching the hen house.

During this transition from rent control to “rent stabilization” as they called it, rent-controlled units dropped from 1,265,000 in 1974 to 71,000 units in 1996. Key in the landlord’s success was a divide-and-conquer strategy: they kept limits on units for existing tenants, but hiked rents for future tenants. This is much like employers’ push for two-tier wage systems in which veteran workers maintain higher wages and benefits, while new-hires get lower pay.

Tenant groups won a crucial push-back in the 1980s which forced landlords to register their supposedly “stabilized” rents with the state. This gave tenants some relief against landlords’ widespread practice of over-charging renters for the costs of building maintenance and improvements.

It takes a movement. In New York and other cities with rent control laws, the strength or weakness of such laws depends especially on the ability of working people to mobilize and put political heat on state and local governments which normally uphold the interests of wealthy landlords and real estate tycoons.

Leftists have often led the fight for the strongest forms of rent control and learned critical lessons over the years. Stephen Durham, a 2012 presidential contender on the Freedom Socialist Party ticket, is a longtime renter in New York and member of the Riverside Edgecombe Neighborhood Association.

He said an essential demand of rent control organizers should be for open books so that tenants and rent boards can monitor the real costs and profits being made by landlords. Elected, not appointed boards, is another important element to strong rent control laws. Too often, rent laws are badly enforced by under-funded boards that are stacked with people appointed by mayors who are beholden to the real estate industry. Local control, where cities make the decisions, is vital. In New York, the state legislature has repeatedly tried to weaken rent laws, only to be pushed back by city tenant unions.

Most important is that the fight for rent control be seen as part of a larger movement to win quality housing for all. As a single-issue movement, rent control is doomed. But it has great potential tied to the struggle to win quality shelter for all, including the old and young, mentally ill, differently-abled, and very poor.

It can unite generations, races, and working people from across the spectrum, as did Seattle tenants who defeated huge rent increases in public housing in 2014. (See Seattle tenants mobilize against massive rent hikes.)

The only solution to the housing crisis is to fight back loudly with uncompromising demands.