Saito delves deeply into Marx’s notebooks, the first to do so. He shows, time and again, that Marx was deeply aware of the unsustainable attack by capitalism upon the land itself.

I have had a gut feeling about that since I first read Marx and his lifelong collaborator Friedrich Engels in my teens: that alienation from the land is a key underpinning of capitalism. 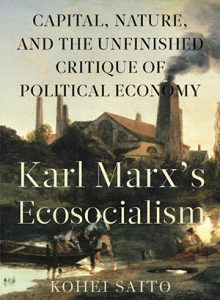 An example from his signature work Capital, A Critique of Political Economy, “Capital asks no questions about the length of life of labour-power. What interests it is purely and simply the maximum of labour-power that can be set in motion in a working day. It attains this objective by shortening the life of labour-power, in the same way as a greedy farmer snatches more produce from the soil by robbing it of its fertility.”

Incomplete analysis. Published after Marx’s death, a lot of Capital’s Volume 2 and all of Volume 3 were based on Marx’s unpublished notebooks. They were a pointer to a finished analysis of capitalism, but not the analysis itself. This fueled the myth that Marx had nothing to say about the ecology of capitalism.

Kohei Saito has returned to these notebooks to show the myth has no basis. Marx was deeply aware that alienation from the land is essential to the “success” of the capitalist economy.

And that success, from the point of view of profit, is not only paid for by the stolen labour of the working class, but the degradation of the earth, particularly, the soil. Underpinning all of this is the separation of people, not only from the products of their labours, but from the lands they once tended as custodians and conservators.

This process was apparent by the 1840s, when the soils of Europe and the colonised parts of North America showed dire signs of depletion of nutrients. Contemporary critics, including Marx, pointed to the “monopoly of private capital” as a key factor. Saito argues it was Marx who nailed this as part of the contradiction of the capitalist mode of production itself, which could only be solved by the abolition of capitalism.

The capitalists saw this problem too. But their “solution” was to plunder the guano deposits of Peru and use them to enhance the dying soils in their home bases. Saito rightly calls this “ecological imperialism.” Here in Australia, the English colonists simply plundered Pacific islands, including Nauru, adding to that theft with Kanak slave labour that built the Queensland sugar industry. Marx was living in London at the time, so his focus was there. He notes that the run-off from farms treated with guano turned the Thames river into a weed-choked sewer. The same was true of rivers throughout Europe and in North America. This threat remains today, contributing to the acidification of the oceans and damage to Australia’s Great Barrier Reef.

A critic of “agricultural chemistry.” Saito reveals that Marx saw through capitalism’s attempt to replace the natural fertility that had been destroyed with manufactured supplements. There were short term benefits, but this technological intervention has never been shown to replace the efficiency and sustainability of natural nutrients.

Saito shows that the roots of Marxism are not only grounded in analysis of the exchange of goods and the exploitation of labour. They are grounded in an understanding of the alienation of people from the custodianship and management of the earth itself.

He also examines Marx’s interest in the rational way land was managed in pre-capitalist society. The closure of the commons and the clearing of the aristocratic estates in England were key to the establishment of capitalism. Dark Emu, by Aboriginal author Bruce Pascoe, also confirms this analysis, showing the care with which Australia’s First People managed the land pre-colonisation.

Saito’s work is well researched, engaging and makes the compelling case that, rather than simply an “interest,” Marx’s environmentalism was systemic and integral to his analysis of political economy. Karl Marx’s Ecosocialism joins Marx’s Ecology by John Bellamy Foster as a tool for understanding the urgent ecological crisis we face right now. Capitalism exploits nature as well as workers and has got to go.

Peter Murray is an Australian ecosocialist and member of the Rail, Tram and Bus Union. Contact him at freedom.socialist.party@ozemail.com.au.

Also see reviews of Dark Emu and Marx’s Ecology on this website.