The people of Honduras rose up against the November 2017 national election, because Juan Orlando Hernández stole the presidency. Predictably, this coup met with U.S. approval. Massive Honduran outrage at the fraud has shaken the foundations of capitalism in one of the poorest countries in the Americas.

Dirty role of USA. Ever since Honduras was a “banana republic” a hundred years ago, run by an autocratic regime on behalf of the United and Standard Fruit Companies, the United States has dominated this tiny country. Bananas and coffee are among its biggest exports, and the U.S. its largest trading partner. The country was used as a base for counter-revolutionary warfare against El Salvador and Nicaragua in the 1980s. It still houses U.S. military bases.

Hernández consolidated his power in the wake of the military-backed legislative coup in 2009, which deposed the democratically elected president Manuel Zelaya. The Obama White House fully supported that coup. The U.S. also funds the TIGRES Special Forces, trained by U.S. Green Berets. TIGRES methods are so brutal that even Honduran police reject them. The U.S. military presence in Honduras extends across the country.

When the votes were being counted on Nov. 26, opposition candidate Salvador Nasralla of Alliance Against the Dictatorship was 5 percent ahead of President Hernández of the right-wing National Party. Then the electoral computer crashed for 36 hours, and when it recovered — Hernández was miraculously the victor by one percent. National Party members helped the computer by stuffing ballet boxes and damaging tally sheets.

As masses swarmed into the streets in protest, Organization of American States (OAS) and European Union election observers identified irregularities and called for a new election, while Nasralla flew to D.C. to plead for U.S. support. But on Dec. 22, the State Department anointed Hernández and merely urged the country’s corrupt electoral commission to engage in a “robust national dialogue” on how to improve elections.

Both Hernández and Nasralla agreed that peaceful dialogue was just what was needed.

Repression and opposition. Hernández’s 2013 win was also clearly fraudulent, violently repressive and murderous — several opposition party candidates were killed. During his tenure, he consolidated his power over the judicial, military and parliamentary sections of government. He slashed social services, privatized public property, doubled the budget for policing, and placed armed security into the poorest neighborhoods. He greatly increased the murder rate of LGBTQ, environmental and social justice activists, notably of Berta Cáceres, a renowned indigenous environmental leader. Women bear the brunt of poverty and suffer rampant domestic violence and sexist discrimination in education.

Hondurans protested all this. A former armed forces captain described how military provocateurs suppressed dissent during Hernandez’s first regime: “In all the protests there are 30 or 40 intelligence agents marching among protesters, … provoking confrontations with the police.”

Shortly after the Nov. 26, 2017 election fraud, tens of thousands took to the streets, blockaded highways and bridges, and launched a wildcat national strike. When Hernández was inaugurated two months later, armed forces tear-gassed crowds of protesters. They demonstrated at the U.S. embassy and U.N. headquarters.

As of late February, at least 36 protesters had been killed, hundreds injured, and nearly 2,000 imprisoned under appalling conditions. A local journalist reported that most of the injuries were caused by police firing into crowds when they thought no foreigners were there to see.

But protest and organizing endure in Honduras, more experienced, politically radicalized, and wary of populist leaders who depend on U.S. money and might. Rarely in history has a ruler been so massively rejected as Hernández has. The grass-roots movers and shakers who accomplished this are union and non-union workers, students, women, youth, and neighborhood, village and peasant militants. Their dogged opposition can lead to a fundamental rejection of bourgeois democracy’s blatant undemocracy and a turn to real, workers’ democracy.

The Honduran opposition deserves solidarity from leftists and progressives everywhere. And from this country, a vigorous demand:

U.S. out of Honduras! 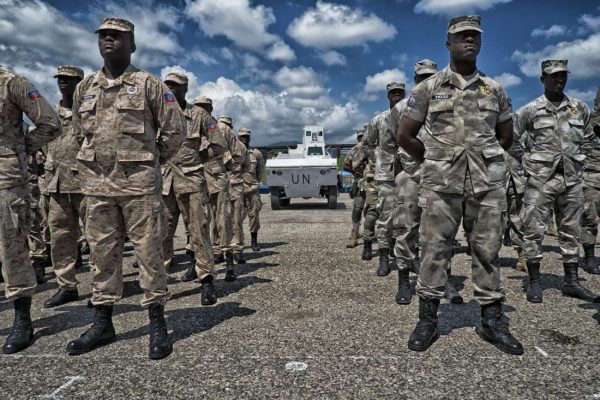 Core Group and imperialism out of Haiti

Abortion rights from Mexico to the U.S.