The USA is widely considered to be the richest country in the world. It has the biggest businesses and the most billionaires. So, many people assume it offers a high standard of living to the majority of the population, including working people.

Nothing could be further from the truth. 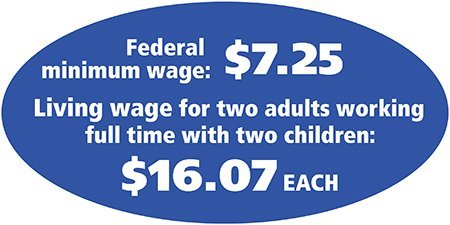 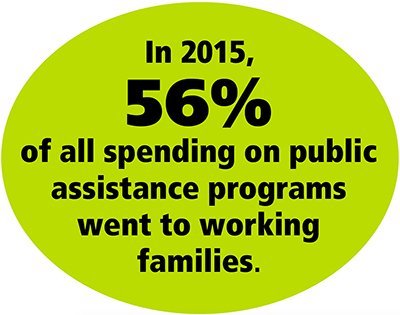 The reality is that U.S. wealth is so unevenly distributed that by the end of 2017 the three richest Americans owned as much as the entire bottom 50 percent. The largest, most powerful corporations push such low wages, insecure hours and few benefits that ordinary working people can’t make a living. Federal figures say there are almost 40 million Americans living in poverty, and about 40 percent of them hold jobs.

This brutal economic reality turns life into a daily grind. The good news is that fast food, hotel, and healthcare workers, public employees, and many others are fighting back against low pay and poverty conditions.

Made-in-America low wages. The official poverty rate in 2017 was 12.3 percent of the population. But those numbers understate the problem. The federal poverty formula dates from the 1960s. It multiplies food costs (based on 1955 calculations, no less) by three, supposedly to account for all other costs of living. According to the National Center for Children in Poverty, families actually need an income of between one and a half and three and a half times the federal poverty level, depending on where they live, to afford basic expenses.

The federal hourly minimum wage of $7.25, in effect since 2009, is a cruel joke. Someone working full-time at this rate earns an annual paycheck of just $15,080 — below the poverty line for a family of two.

Federal minimum wage laws have never kept up with inflation. The current wage is so low that twenty-nine states and many cities have passed their own, higher minimum wages. But even these are inadequate.

Washington likes to brag about a low unemployment rate, just under 3.75 percent in September, for example. It is higher among people of color and youth, and doesn’t take into account workers who have given up looking for jobs or are underemployed. But the rate is indeed low, by capitalist standards. Officials conveniently forget to remind people that the new jobs are typically low-pay, with insecure hours and hardly any benefits.

Low unemployment means a relatively high demand for labor. High demand should translate into higher wages. But the economic and political power of large, low-wage employers like Walmart, Amazon, Target, Yum! Brands (KFC, Taco Bell, and Pizza Hut), McDonald’s, Uber and Lyft effectively sets the wage rates for many industries. Low pay is the standard for fast-food, hospitality, childcare, and many healthcare workers, and even highly educated adjunct professors. The same companies are aggressively anti-union, hiring professionals to fight unionization and even sometimes closing facilities that announce organizing drives.

Workers forced onto public aid. Despite the high demand for labor, wages for many employees are so low that they need food stamps, Medicaid or Children’s Health Insurance, TANF (formerly known as welfare) and other assistance programs. According to the Economic Policy Institute, “Among families or individuals receiving public assistance, the majority (66.6 percent) work or are in working families.” Walmart, Amazon, and all the usual fast-food chains consistently rank among those employers with the most food-stamp enrolled employees. These corporations knowingly consider the availability of public assistance when calculating their low pay scales.

Another indicator of the inadequacy of current jobs is the prevalence of contingent “gig” work. These positions include on-call, contracted, temporary and online platform labor. Gallup has estimated that 29 percent of the U.S. workforce has an alternative gig work arrangement as their primary job. Most of these jobs have no set hours, duration, pay or benefits. Many are part-time. 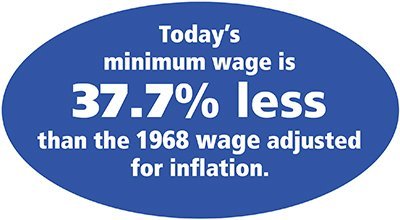 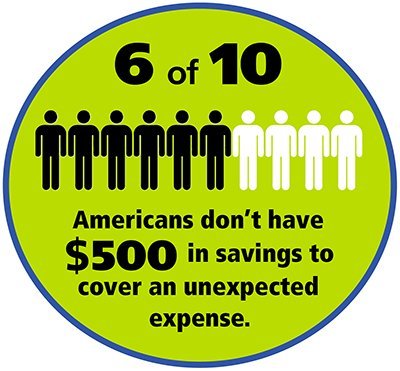 Need for living wages. The Massachusetts Institute of Technology (MIT) has studied living wages, the minimum amount to meet basic needs of food, childcare, health insurance, housing, transportation, clothing and other basic necessities. This doesn’t include any “luxuries” like entertainment or restaurant dinners. MIT calculates a national average living wage for 2017 of $16.07 per hour for each of two working adults employed full time and supporting two children. This is an income of $64,280. Wages needed are higher in metro areas, where most of the jobs are.

The hardships fall more heavily on people of color and women. The Economic Policy Institute calculates that Black and Latino poverty rates would be nearly 20 percent lower if the 1968 minimum wage had stayed in effect and been adjusted to inflation. Women are over 80 percent of minimum wage workers. Naturally, single heads of households, most of them women, are impacted the most.

Workers under attack fight back. Since the late 1960s, the biggest U.S. corporations have used their clout to weaken unions and steadily push workers’ wages and conditions down. But for several years the response of labor, organized and not, has been combative.

In 2012 fast food workers began the struggle for a $15 an hour minimum wage. They have won gains in four cities and two states, and are still organizing. A pressure campaign on Walmart got it to increase starting wages to $11 in January 2018. Amazon raised its bottom wage to $15 in October 2018 (though in typical fashion, it reduced other benefits). Early in 2018, striking teachers in West Virginia won a 5 percent pay raise and inspired teachers in many states to follow suit. In September, Chicago hotel workers and Marriott workers in eight cities started strikes.

Clearly, the fight must be for more than $11 or even $15 an hour. It must be for a wage that guarantees a decent standard of living for all working people and their families. It must be continually adjusted for inflation. And workers need to organize, build, and strengthen unions in order to carry through the most effective struggle. Winning living wages is a big task, but it’s a matter of survival.