A silent assault on women’s health is being waged at Catholic medical facilities. It can be as open as staff stating “we do not do elective abortions” or as insidious as not providing prospective parents with full and accurate medical assessments and treatment options.

Reproductive rights advocate Mary Kay Barbieri told Aljazeera.com that there are “documented cases” of women suffering miscarriages who “have returned to the ER [at Catholic hospitals] several times and been advised to go home and wait.” Furthermore, the women “are not advised that their pregnancy is not viable and are not advised they could become seriously ill if they continue with the pregnancy.”

These women needed to terminate their pregnancies immediately to prevent life-threatening infections. At a secular hospital, this would have been offered. But Catholic hospitals are bound by religious directives that take precedence over patient needs.

Catholic expansion in the medical field is just one part of a larger assault on women’s rights.

In the first five months of 2019, 27 abortion bans have been enacted in 12 states. These include laws that prohibit abortions as early as six weeks after gestation.

Such laws are making access to quality, affordable reproductive healthcare more tenuous than at any time in the past 50 years.

A quiet takeover. In recent decades, Catholic hospitals have become a major provider of healthcare across the United States, often merging with other hospitals.

Since the Great Recession of 2008, a poor economy, along with skyrocketing insurance and pharmaceutical costs, has created a crisis that threatens to shut down less profitable hospitals.

Small, rural hospitals in particular have been looking for partners to keep their doors open.

So in steps the Catholic Church!

There are at least 630 Catholic or Catholic-affiliated hospitals in the United States, and they account for 15 percent of all hospital beds. Four of the top seven private hospital systems in the U.S. are Catholic. It’s estimated that one-third of Catholic hospitals are in rural areas and one-sixth of U.S. patients are treated in a Catholic facility.

Patients may not even know they have chosen a religious-based hospital. As many as 20 percent of Catholic-affiliated hospitals do not clearly disclose this information on their website.

Bishops decide. The church’s Ethical and Religious Directives (ERD), a creation of the U.S. Conference of Catholic Bishops, ban abortion, in vitro fertilization, contraception, and tubal ligation. The ERDs give local bishops the final judgment about allowing those services, even in the case of emergencies.

Dr. Cristina Lete, an Obstetrician/Gynecologist, was frank about her experiences dealing with Catholic protocols in southeast Michigan from 1996 to 2007. Despite working at a private clinic, Lete needed hospital privileges for surgeries and most major hospitals in the area were Catholic-run. Doctors were required to sign contracts to follow Catholic rules when using the facilities. They had to either abide by the restrictions or schedule surgeries at other hospitals.

One roadblock Lete ran into was the need to get permission to perform tubal ligations (sterilizations) after women had cesarean sections, the best and safest time to do this procedure.

At one facility, if a woman wanted to be sterilized after a C-section, Dr. Lete had to call in a consultant mid-surgery who would “verify” that the woman’s uterine walls were too thin to allow another pregnancy — a false addition to the woman’s medical history, though it was done with the patient’s approval.

At another hospital, Lete had to apply in writing to the head of her department for permission to perform the surgery. If a patient had gone into labor before receiving approval, there would be no sterilization. This small window closed in 2001 when doctors at the facility were told there would no longer be any allowances for tubal ligations.

Catholic bishops have been a force behind “conscience clauses” that allow doctors, nurses and pharmacists to deny services that conflict with their personal beliefs. Lete described the real-world implications: surgeries are scheduled around the prejudices of staff members, not the needs of their patients.

In May 2019, Trump’s Department of Health and Human Services proposed to overturn the section of the Affordable Care Act that bars “discrimination based on sex.” Many medical, queer and feminist groups have spoken out against this change. The U.S. bishops, however, applauded the proposal, stating it would “help restore the rights of healthcare providers — as well as insurers and employers — who decline to perform or cover abortions or ‘gender transition’ procedures.”

Taking a stand. Not surprisingly, many people do not accept church control of the most momentous decisions of their lives. A merger that would have strengthened the ties between University of California’s San Francisco Medical Center and Catholic-run Dignity Health fell apart in May after blowback from students, staff, faculty and the community.

Protesters objected that the affiliation put the university in the position of accepting a discriminatory model of medicine. They cited two lawsuits against Dignity Health: Evan Minton, a transgender man, sued for being denied a hysterectomy as part of transitioning; Rebecca Chamorro brought in lawyers after being refused a tubal ligation. The combination of public pressure and bad publicity worked. The deal was off.

The religious right wants to control women’s lives and enforce gender conformity. Feminists need to counter every assault with a militant grassroots defense of reproductive justice and transgender rights.

As the chant says, “Not the church, not the state! Women will decide their fate!” 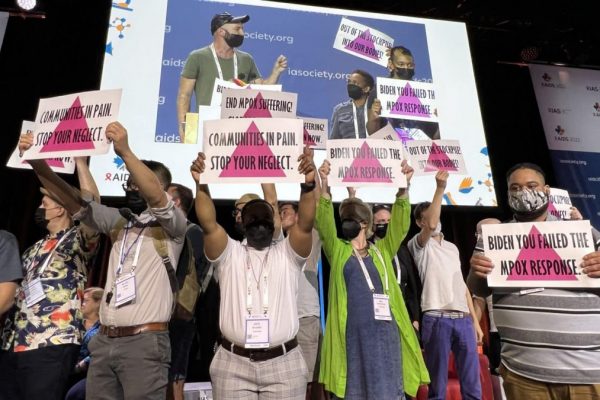