US presidential contest reflects the growing polarization of society 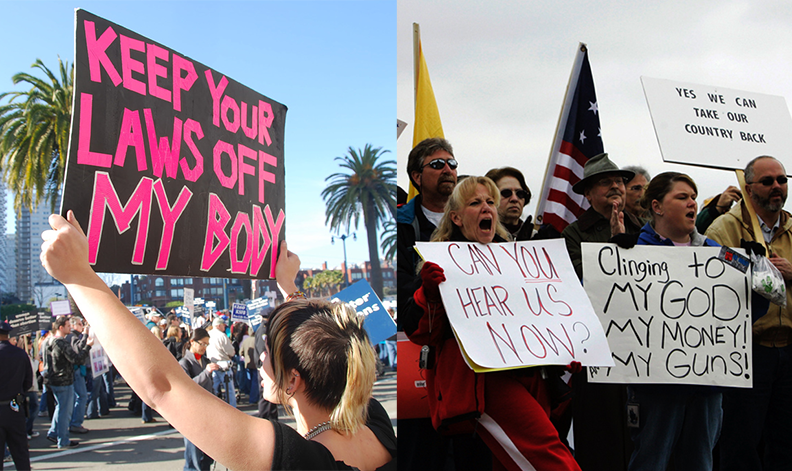 Who’s on top? On the Democratic Party side, the ultimate insider, Hillary Clinton, faces off against establishment socialist and theoretically “independent” Bernie Sanders. On the Republican side, the main contest at the moment is a three-way among rude and crude misogynist and racist Donald Trump and two sons of immigrants who each want to build a bigger and better border wall, Ted Cruz and Marco Rubio.

A motley crew indeed, but one that reflects what is happening outside the electoral ring. The crowded debate stages mirror the growing polarization of society as a whole, largely caused by people’s deep uneasiness about the economy and their place in it.

The candidates also personify the sharpening of a trend whereby capitalist democracy, as represented by the electoral process, is becoming less and less democratic all the time.

Divisions result from the system’s decline. It’s easy to see how people’s insecurities are creating deep divides in the U.S. And all the candidates are attempting to capitalize on these fears.

Your benefits have shrunk and you’re worried you might be included in the next round of layoffs at work: do you blame Wall Street, like Sanders? Or China, India, and immigrant workers, as Trump encourages you to do?

Planned Parenthood defenders against the fetus fetishists, Black Lives Matter protesters confronting militarized cops, youthful “Dreamers” opposing the deportation fanatics: these are the rifts that starkly separate people. There is no consensus, not even the pretense of one, and our politicians reflect that.

Marxist writer George Novack traces social polarization to deep roots. He explains in the book Democracy and Revolution that it grows out of the essential nature of capitalist democracy — which, like capitalist economy, has built-in contradictions that eventually catch up with it and lead to its decline.

Capitalist democracy has always been about promising the working class and the middle classes things that the profit system is not designed to deliver. It’s always been about lies and illusions, because it’s about maintaining a tiny ruling class at the expense of everyone else — while pretending the system works for everybody.

Novack makes the point that the system relies on two things to keep the 1 percent in power. These two things are the institutions of force and repression — police, courts, army, etc. — plus indoctrination. The ideological component is designed to persuade people that the capitalist system is the best possible system, the one that will give them the best shot at a good life, the most democratic system. And the electoral process is fundamental to maintaining this belief in democracy.

As time goes on, however, especially as the economy degenerates, the indoctrination wears thin. People begin to wonder if there isn’t another alternative after all, and class conflict rises. But the response to hard times and disillusionment is not the same for everybody; polarization happens. The establishment is challenged by socialists and other radicals from the left and by reactionary demagogues and even outright fascists from the right. To maintain itself, it turns more and more to the police, denial of civil liberties, criminalization of protest.

The electoral process mirrors the upheavals and divisions in society at large, and the populist demagoguery of the politicians in turn aggravates them. What we see today isn’t anything brand new, but it’s the intensification of the long decline of capitalist democracy, more or less in tandem with capitalist economy — basically, the tendency of the system to go to hell.

Challenge from the grass roots, cracks in the façade. No doubt, the extremist polarization on the right — represented most aggressively in the election by Trump, Cruz, and Ben Carson — is dangerous. But it’s just one side of the story.

In an impressive breakthrough, some unions are now supporting socialists like Kshama Sawant in Seattle and Bernie Sanders. True, Sanders’ reformist socialism is full of contradictions (for example, his votes on war funding), and his main function in this election is the same as liberal or maverick Democrats before him. This is to keep unionists, progressives, and radicals remaining firmly in the Democratic camp rather than breaking away to form a truly alternative, anti-capitalist, working-class electoral party. Nevertheless, the pro-socialist sentiment of voters supporting Sanders stands as a heartening testament to changing times.

There are other hopeful signs. The ruling class is losing its ideological hold on people, who have increasingly less faith in politicians and the system, opening the door to increased radicalization. The result is things like the Citizens United decision, giving corporations the right to spend as much money buying elections as they please. It is necessary in order to manipulate a process that is losing people’s confidence.

Similarly, every attempt to keep poor people, Blacks, immigrants, left voters, etc., away from the ballot box is an admission of U.S. capitalism’s failure to win hearts and minds and an effort to prevent the growth of a radical alternative.

Beyond elections. This brings us to the question of how much elections really matter.

In the normal run of things, the outcome of an individual election doesn’t change the general direction in which things are moving. Think about the last several administrations, Democrat and Republican, in relation to the trend of developments. Permanent war; destruction of welfare; erosion of union rights, civil liberties, reproductive freedom; swelling of the police state; economic instability; the growing chasm between rich and poor. It’s not a pretty picture, but it’s a consistent one.

This dire possibility brings into focus the importance of the role of the organized Left and the labor movement. Any successes that socialists or independent union candidates have in the electoral arena open up new possibilities. More fundamentally, however, it is about working-class radicals fighting every day to educate people, to win them over — to persuade people who aren’t already convinced that the present electoral process is a sham and to show that a humane anti-capitalist alternative is possible.

And, crucially, it is about socialist groups taking initiative and leadership in helping all the forces of opposition, from militant unionists to LGBTQ liberationists and youth of color in the streets, to come together and fight as one.

Updated from an article in the December 2015-January 2016 Freedom Socialist.