The Ordinary Person’s Guide to Empire 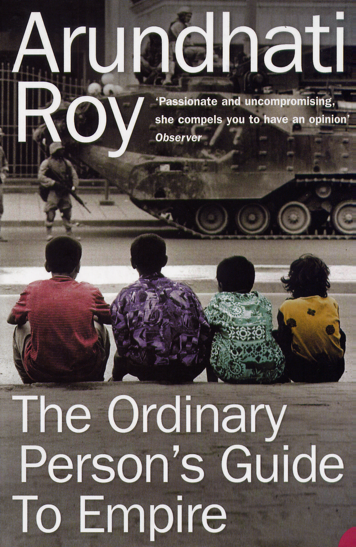 Arundhati Roy came to prominence when her first novel, The God of Small Things, won the 1996 Booker Prize for literature. She has gone on to write several works of fiction and non-fiction. Roy is an outspoken, internationally popular anti-globalisationist and Indian feminist. Her latest book, The Ordinary Person’s Guide to Empire, is a collection of  speeches and essays that is easy to read and uses colourful metaphors to highlight what is happening in the world — where the rich are getting richer and the poor much poorer. Having thoroughly enjoyed The God of Small Things, I was excited when Radical Women (RW) decided to conduct a six-week discussion series on Roy’s latest writing. RW believes that The Ordinary Person’s Guide is important for understanding the movement against corporate globalisation and the connections between war and imperialism. RW’s weekly gatherings attracted a lively crowd of people who exchanged perspectives and interpretations.

Three chapters which best give the flavour of Arundhati Roy’s writings are: Come September, presented as a lecture in Santa Fe, New Mexico on 18 September 2002, Confronting Empire, an address given to the World Social Forum in Porto Allegre, Brazil in January 2003, and Instant-Mix Imperial Democracy, which Roy delivered at the Riverside Church in New York in May 2003.

Come September. Using the first anniversary of 9/11, Roy examines the role of U.S. foreign policy in the invasion of Afghanistan and preparation for war against Iraq. The White House used the grief of September 11 for political purposes. Rather than avenge the 3,000 killed, as Bush claimed, the war was a brutal desecration of their memory.

This was how the war in Afghanistan and Iraq was promoted to the American people and the world. We were persistently told that the whole point of the war was to topple the Taliban regime and liberate Afghan women from their burqas. We were asked to believe that the U.S. marines were on a feminist mission. Roy answers: “If that’s the case, there are many other countries that treat women and minorities badly. Should they too be bombed?”

Bush’s war machine then cynically manipulated people’s grief, packaging it for TV specials by which corporations sold products from detergent to running shoes. What Americans were viewing, says Roy, was “a vulgar display of the business of grief.”

Washington claims the U.S. to be a peaceful nation. However it has been involved in many wars, covert and overt, in the past 50 years, using nuclear bombs in Japan and wreaking more terror from Asia to Latin America. Before 1991, when Bush’s father went to war against Saddam Hussein, the Iraqi dictator had been an ally of the U.S., obtaining billions of dollars in subsidies and high-quality germ seed for anthrax. Roy asks, what changed? She answers, Hussein invaded Kuwait. “His sin was not so much that he had committed an act of war, but that he acted independently, without orders from his masters. It was decided that he be exterminated, like a pet that has outlived its owner’s affection.”

A decade of sanctions against Iraq followed the first war, and half a million children died. The U.S. wanted a regime change, but not to liberate the people of Iraq. Roy states that wars are never fought for altruistic reasons, only for business. In both Afghanistan and Iraq, this business is oil: “Oil keeps America’s engine purring sweetly. Oil keeps the free market rolling.” Whoever controls the world’s oil controls the world’s markets.

Roy states that since the so-called war on terror began, it has curtailed freedoms and civil liberties in many countries. All kinds of dissent are being defined as “terrorism,” and all kinds of laws are being passed to deal with it. “Twenty-first century market capitalism, American-style will fail,” says Roy, “because too few people have too much power.” She believes that power has a shelf life, and when the time comes, this empire will overreach it and implode from within.

Cracks are appearing already, says Roy: “As the war against terror casts its net wider and wider, America’s corporate heart is haemorrhaging. A world run by a handful of greedy bankers and CEOs whom nobody elected can’t possibly last.”

Confronting Empire. Corporate globalisation and privatisation are pushing people off their lands and out of jobs. India’s Structural Adjustment Program, for example, has led to hundreds of impoverished farmers committing suicide and countless deaths from starvation. Roy claims that not only does this bring about resistance movements, it is a breeding ground for cultural nationalism, religious bigotry, fascism and terrorism. All this leads to the dismantling of democracy.

Corporate capitalism needs an international confederation of loyal, corrupt, authoritarian governments in poorer countries to push through unpopular reforms, with no free press, unjust courts and an army standing ready. India, as Roy points out, is the world’s largest democracy. In a privatisation drive, its government has been selling off its resources. To divert its people’s attention, it has fostered Hindu nationalism and religious terror. In March 2002, in the state of Gujarat, two thousand Muslims were butchered in a state-sponsored pogrom. Muslim women were stripped and gang-raped before being burned alive. Arsonists burned and looted shops, homes, textile mills and mosques. In December 2002 the government that orchestrated the killings was voted back into office. No one was charged.

Meanwhile, European countries to India’s north shut their borders to refugees. Around the world, only money, goods, patents and services can flow freely. Empire, states Roy, is a collusion of power that greatly increases the distance between those who make decisions and those who have to suffer them. Roy points to the hope that popular resistance offers — to the uprisings in Bolivia, Peru, Venezuela and Argentina.

Instant-Mix Imperial Democracy. In this address to her New York audience, Roy explores why the U.S. went to war in Iraq, the lies about Weapons of Mass Destruction and how the Bush Administration, accomplished this with the aid of the media. She explains that facts don’t get in the way of Empire’s ambition. Nor does democracy, as Empire confers upon itself the right to go to war whenever it needs to. Roy explains, “Empire is on the move, and Democracy is its sly new war cry. Democracy, home-delivered to your doorstep by daisy-cutters. Death is a small price for people to pay for the privilege of sampling this new product: Instant-Mix Imperial Democracy (bring to boil, add oil, then bomb).”

Roy is scathing of one of the war’s biggest obscenities, U.S. Defense Secretary Donald Rumsfeld. More than a decade of UN sanctions destroyed Iraq’s infrastructure, so when Saddam was driven from power, starved and impoverished Iraqis looted stores and hospitals. CNN reported these scenes to the world as a liberated people venting their rage against a despotic regime. Rumsfeld played on the distortion, saying: “It’s untidy. Freedom’s untidy and free people are free to commit crimes and make mistakes and do bad things.” Roy then says to the crowd in Riverside Church: “I wonder — did he hold the same view during the riots in Los Angeles following the beating of Rodney King? Would he care to share his thesis about the Untidiness of Freedom with two million people being held in U.S. prisons right now? The world’s ‘freest’ country has the highest number of prisoners in the world. Would he discuss its merits with young African American men, 28 percent of whom will spend some part of their adult lives in jail? Could he explain why he serves under a president who oversaw 152 executions when he was governor of Texas?”

Roy makes it very clear that the poor, unemployed, single mothers, students and working people of America are paying for the war. Their “democratic” government cut 49 billion dollars in public services, welfare benefits and education in 2002 and was planning to cut another 25.7 billion in 2003.

In this “free” nation, it’s the American poor who are also sent to fight the war. The “volunteer” army depends on a poverty draft of poor whites, Blacks, Latino and Asians looking for a way to earn a living and get an education. African Americans make up 21% of the total armed forces and 29% of the U.S. army. They count for only 12% of the population.

Arundhati Roy’s solutions. Roy advocates People’s Sanctions against every corporation awarded a contract in post-war Iraq. Each profiteer should be named, exposed and boycotted. She argues for an independent, alternative media and the need to retrieve real democracy across continents and countries. Nothing short of a revolution, especially in the United States, will bring down the Empire. She defines this revolution as the refusal to fight, move missiles from the warehouse to the dock and wave the flag.

Radical Women’s solutions. RW agrees that civil disobedience is a vital form of resistance and that revolution inside the “belly of the beast” is pivotal. But it will take more than labour resistance and boycotts to change the world.

Needed right now is for working people in the U.S., Australia and throughout the world to support the Iraqi resistance. Sign RW’s international petition to Bush and the U.S. Congress in defence of Iraqi women, calling for the end to the occupation. The petition demands the immediate withdrawal of U.S. troops, reparations to Iraq by the war profiteers, release of all women in custody of the occupation and the puppet Iraqi government, the end of U.S. support of Islamic fundamentalists and for a fully democratic, secular government. In Melbourne alone, RW has collected a thousand signatures in just a month. (The petition is available on www.radicalwomen.org/iraqipetition.html or by contacting Melbourne RW on 03-9388-0062 or radical.women.melb@bigpond.com) In Australia, the U.S. and the rest of the world, we need to organise in our unions and on our streets around these demands on the U.S. and our own complicit governments.

Nothing short of a massive, democratic movement which connects the wars in Iraq, Afghanistan and Palestine with the war on working people at home will achieve this. When women and men of colour, Jews and whites, workers and students, queers and straights, the old and the young unite against sexism, racism, homophobia and all forms of oppression, we will form a superior anti-imperialist counterforce.

We would then have the power to overthrow the capitalist system and create a socialist world based on communal ownership of resources, democracy and cooperation. Children will grow up sharing all that the planet and human talent can provide, free from poverty, war and exploitation.

The Ordinary Person’s Guide to Empire connects up our global experiences and answers the neoliberal spins and lies. It so eloquently describes just how brutal, and vulnerable, capitalism is.

For the ordinary people wanting to transform the world, get in touch with Radical Women. RW trains women to be the leaders needed to bring on this change.