Escalation of the Abortion Wars: Why Capitalism Cannot let women control their own lives 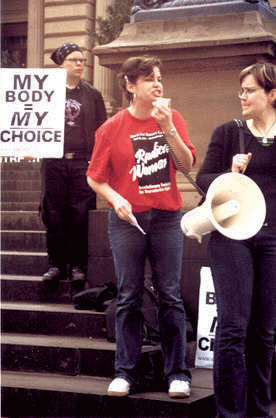 Erin Mustain from Radical Women in the U.S. Spoke at a Melbourne
rally for abortion rights in September 2004.

Every month, a defence line is positioned outside East Melbourne’s Fertility Control Clinic to keep
away the Helpers of God’s Precious Infants, a vicious little group that marches up from a nearby Catholic church with their effigies of Mary and infant Jesus, crosses, rosaries and bunches of flowers. Each time, there’s an exasperated comment from our side: “I can’t believe we’re still having to do this!” But in Victoria, as in every state and territory except the Australian Capital Territory, abortion remains a crime. And so it is in many other parts of the world. In May this year, a 22-year-old woman in Manchester, England was sentenced to a year in prison for having an illegal abortion.

On May 31, in a diatribe from the pulpit, the head of the Catholic Church in Scotland damned abortion as “an unspeakable crime,” comparable to the massacre 12 years ago of schoolchildren in the Scottish town of Dunblane. Cardinal Keith O’Brien’s hellfire and brimstone was the opening shot in the campaign of Great Britain’s Life League, demanding that all Catholic Members of Parliament pledge to support the church on abortion and other “life” issues. A week later, Sydney’s Cardinal George Pell similarly threatened Catholic MPs in New South Wales with banishment from communion if they voted to expand stem cell research. In April, the United States Supreme Court criminalised intact dilation and extraction after the first trimester (12 weeks), thus further restricting women’s ability to terminate unwanted pregnancies.

More of the same. The term “abortion wars” refers to the alliance forged in the United States between Christian fundamentalism and the political right wing after the Supreme Court’s 1973 Roe v Wade ruling, which proclaimed abortion rights for women throughout the country.

If there’s one phrase which sums up the anti-abortionist view of women it’s: “A women’s place is in the home.” Today, those specific words are considered dated and crude, thanks to the feminist movement. But the message still lives as long as women do not have full reproductive freedom. Unfinished battles remain to secure abortion on demand, childcare, paid maternity leave, equal pay, and non-discriminatory access to assisted reproductive technology, to list just a few. A woman’s right to decide whether to have children, or when and how many, is about her determining the course of her life. The moralistic fabrication of the foetus as a person with feelings is a despicable device to play on people’s humanity, with inhuman consequences. Elevating the rights of a foetus above those of a living, breathing woman, dooms many women to miserable futures or painful deaths.

Bribes for babies. Federal Treasurer and Christian patriarch, Peter Costello, is an evangelist for big business and its need for skilled labour. His call to Australian women to “have one child for the husband, one for the wife and one for the country” has been dismissed by most working people as ridiculous. But he’s deadly serious. There is a massive skills shortage in Australia, which will only worsen as the fertility rate declines. Corporations need women at home, creating the next generation of workers. Paradoxically, business also needs women in the workforce and wages to be driven down. That’s why the Welfare-to-Work and the brutal WorkChoices laws were enacted. Women are pulled in two directions. State and federal governments resist pressure for a national paid maternity leave scheme and accessible childcare, which forces mothers to stay home. In any case, workers no longer able to pay for decent housing, comfortable heating and transport costs find it hard to afford a child. The 10% childcare rebate increase and $4,000 Baby Bonus, announced by Costello in this year’s pre-election federal budget, is insultingly inadequate. To some extent, parents on high incomes may benefit, because they can afford childcare. But mostly, the money goes straight into the pockets of the big childcare providers. In other words, the budget bribes are just more corporate welfare.

The double burden. Domestic “bliss” looked like this in the 1950s: the woman at home, raising children, looks after the wage slave. She cooks his meals and packs his lunch; she’s there for him after a stressful workday and whenever he’s sick or broken. She keeps him productive. By example, she teaches the children who’s the boss at home. Domestic peace is important, but children also must learn to respect authority once they enter the workplace and go out into society. This is the perfect family under capitalism. Women can make or break it.

In 2007, most women expect far more from their partner than this. That’s the influence of feminism, again. Yet men still do the minority of housework. Most women work at least part-time, because it’s now impossible to raise children on one income. They have to do all of the above plus hold down a job.

Equal partners. It wasn’t always like this. For most of history, society was communal. There was a division of labour, but both women and men contributed to daily survival. Crucially, everyone’s work was equally valued, as was women’s role as community leaders. There was no basis for classes to exist, so no group was exploited for another’s gain. Consequently, women did not belong to men in domestic partnerships, and children were regarded as society’s future, not anyone’s property. This lasted until technological and agricultural development led to the development of a surplus beyond daily social needs.

Men, who tended the cattle — the main machinery for cultivation and the currency of exchange — became the owners of the herds. This paved the way for the inequalities and exploitation of today’s world. A class society evolved where a male élite was able to lord it over the majority of men and all women. Women were reduced to being the reproducers of heirs for the ruling class and the slaves of the exploited male majority. When women lost their equality, they lost their reproductive freedom.

Fighting back. Campaign for Women’s Reproductive Rights in Melbourne and the Bay Area Coalition for Our Reproductive Rights in San Francisco are coalitions of pro-choice women and men which have tenaciously defended abortion clinics and counter-demonstrated against anti-abortionists in Australia and the United States. The million-plus March for Women’s Lives in 2004 was the largest march on Washington DC in U.S. history. On June 14 this year, members of the Community and Public Sector Union (CPSU) rallied, in teeming rain, in Sydney to demand paid maternity leave. The rally was organised by Marie Claire magazine! The CPSU pointed out that, although most members are entitled to paid maternity leave, two-thirds of working women aren’t. New South Wales Minister for Women, Verity Firth, stressed the point that WorkChoices makes it even harder for women to have children and keep their jobs.

In April 2007, the Liquor, Hospitality and Miscellaneous Union (LHMU), which covers the majority of childcare workers, launched a campaign in Melbourne’s northern municipality of Moreland to address the outrageously poor ratio of staff to children in Victoria. The British Medical Association (BMA) has answered the anti-abortion assault launched by the Edinburgh cleric with a call for abortion on demand. The BMA states that in the first trimester of pregnancy, women should be able to have a termination without doctors’ approval and performed by trained nurses and midwives.

Ours for the taking. Let’s turn up the heat to decriminalise abortion. If Mexico, South Africa, Argentina and Portugal can do this — against enormous rightwing reaction — so can we. While we’re at it, make the federal government follow through its decision (due to popular demand that, last year, led to a parliamentary push) to allow the “abortion pill,” RU486, into the country. The same with providing a national paid maternity leave scheme for all working women. Why should Australia be one of a handful of countries without one! Let’s make childcare once again community-run and extend it to large workplaces. Make the Victorian government embrace the recommendations of the Law Reform Commission for same-sex couples’ rights, including equal accessibility to IVF for lesbians and single women.

The attack on women’s reproductive rights is an attack on the working class as a whole. The system that will not unconditionally secure abortion rights to women is also a system that cannot provide jobs, healthcare, housing or education. It’s a system that needs to be wiped out and replaced with one that will — run by working people, whose interest is to make a society that is just and equal for everyone and who have the expertise to do it.

The working class is putting up a fight, which is forcing changes here and there. We should keep pushing our mainstream parliamentarians, who are skilled in testing the mood. Ultimately, the real and everlasting change will come from working women and men collectively rolling up our sleeves and re-setting the foundations. Then, women will once again be free to be independent actors and leaders in a society that also respects and loves children as human beings, not as prospective wage slaves.

If you want to get involved in raising the heat, contact Radical Women: radicalwomen@optusnet.com.au
or call 03-9388-0062. We’d love to hear from you!

Break the cycle: End the criminalisation and abuse of kids