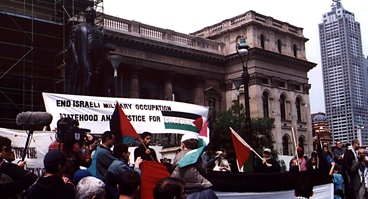 More than three million Palestinian people have been made refugees since 1948 — when their land was stolen to establish Israel — and in subsequent wars. Those living in Gaza and the West Bank have fiercely resisted the Israeli army, wanting nothing more than to return to their homeland. Any “peace agreement” that prolongs military occupation and avoids fundamental issues of territory and autonomy is just a forced march to nowhere.

There will be no end to fighting in Palestine as long as the United States Government, which annually spends six billion dollars underwriting Israel’s oppressive might, oversees various “summits.” Nor will peace result if political power in Israel or Palestine defaults to rightwing religious fundamentalists.

Meanwhile the United Nations (UN),  despite passing occasional resolutions in support of the Palestinians’ right to self-determination, has failed miserably to bring them justice. While we support demands that the UN contribute toward meeting the needs of Palestinians for food and shelter in both the West Bank and Gaza, we oppose calls to send in UN “peacekeepers.” The UN is a blatant tool of U.S. imperialism and cannot be the vehicle for forging a just peace in the Middle East.

A lasting peace. The solution must be found in deliberations of those who have the most to gain from a just cessation of hostilities: Israeli and Palestinian workers, feminists, intellectuals and the parties that represent them. Arabs and Jews — including many survivors of the Holocaust — can and must find a way to reside together; Jews and Arabs lived harmoniously for centuries in the region, and can do so again.

While in the immediate future it seems as if the best possible scenario is the creation of two States, this could only be a transitory phase. It is not a solution in the longer term, because it cannot bring justice to the Palestinians who have lived in refugee camps since 1948 and have a right to return to their homes or receive comparable compensation. It cannot end the racist discrimination nor guarantee the human rights of Palestinians who have lived in Israel since 1948 and are Israeli citizens. Israel is already getting six billion dollars a year, and a Palestinian state would require massive economic assistance. The countries would be puppets, serving the interests of oil companies rather than those of their own people, and totally reliant on the patronage of Washington.

The movement for Palestinian statehood can be a vital step toward creating a permanent solution — a bilateral secular socialist state in Palestine, run by Arabs and Jews as equals. Socialism is essential to the creation of a just society in this new state. There is an immense discrepancy between the economic status and level of education of the Jewish population and the Palestinians. Today, most Palestinians serve as cheap labour to the Israeli economy. A capitalist state would continue this division between Jews and Palestinians, because it would be seen as “good for the economy.” The result would be a new state with two classes of citizens: the servants and those who are served.

Protest the Zionist slaughter. During the five years following the 1987 Intifada, more than 1200 Palestinians were killed by Israel. In the first three months after the start of the Al Aqsa Intifada, more than 300 have been killed — most were Palestinian, and 20% were children. U.S. and Israeli officials exhibit unmitigated racism in describing the deaths of Israelis (mainly soldiers) as a barbaric tragedy, while minimising the murders of Israeli-Arab and Palestinian civilians. The world is appalled at the hypocritical condemnations of Arab violence by the two countries most steeped in violence. There is a difference between the violence of the slave and that of the master. One fights for freedom. The other to subjugate.

In a war of independence, it often doesn’t matter who fires first in a particular battle. But this current rebellion was clearly sparked by reactionary Israeli leader Ariel Sharon’s provocative visit to Al-Haram Al Sharif (Temple Mount) accompanied by 1,000 troops. Sharon chose his incendiary action to bury the ill-fated peace process and bolster his leadership of the reactionary Likud Party. Internecine Israeli politics must no longer dictate life or death in the Middle East.

Australians can support the people of Palestine — and Israelis who oppose Sharon’s policies — by demanding that Canberra withdraw diplomatic support for Israel, demand the removal of all Israeli troops from the West Bank and Gaza, recall its military “advisors,” and cancel all aid to Israel!