Lions for Lambs and the limits of liberalism

Director and actor Robert Redford’s antiwar film, Lions for Lambs, would be easy

to dismiss as a long, drawn-out lecture delivered with sledgehammers. But as a pithy

The film is composed of alternating dialogues that take place in three different settings.

militarist Senator Jasper Irving (Tom Cruise) in Washington, D.C. He has initiated a

and sell it to the public. With his megawatt smile and excellent dental work, Cruise is the

an apathetic, privileged, white male student and challenges him to wake up and “do

the good life vs. committed engagement to “make a difference.”

Also in the mix are scenes that show two of these ex-students, an African American and

his badly injured Latino buddy, facing death after falling from a downed helicopter onto

a freezing mountaintop in Afghanistan. They are the first victims of Senator Irving’s new

entertainment and trivia instead of a responsible investigator. In a time of ruthless U.S.

global aims and lethal foreign policy, this is an abdication with deadly consequences.

Further, Lions accuses the political system of runaway self-interest no matter the cost,

or, as Senator Irving puts it, through doing “whatever it takes.” It finds society at large

wanting, too, because people supposedly are too bound up in consumerism to care about

ending the system’s rot and corruption.

An example of dissent with no direction. These situations and premises sound like the

basis for a stimulating film, but ticket sales for Lions have been meager and the movie

has not lasted in theatres in the U.S. for more than a few weeks.

Perhaps audiences simply do not see antiwar films as entertainment. However, word of

mouth from those who did see Lions characterized it as uninspiring, even boring — and

Namely, while Lions exposes and condemns some of the ugly realities of political life, it

The movie’s form demonstrates the bankruptcy of the post-modernist approach: its three

parts are disconnected from each other and none of them goes anywhere. There is no

target and no destination. Abrupt cuts from one conversation to another are no substitute

This disconnected form reflects the film’s essence — its politics go nowhere either.

Describing problems is not the same as analyzing them. By not exploring the “why” of

the issues it presents, Lions for Lambs becomes a political cul-de-sac.

can make a difference: “Lick envelopes, knock on doors … do something.” The student

appears chloroformed by this invitation to join the endless wheel of liberal reform-the-
system suffering.

The precious platitudes of liberalism avoid a basic truth: the system that generates wars

revolution. However, many people who deeply desire change are drawn to a step-by-
step, reformist kind of activism because it is all they see, or they are hammered with the

idea that any other approach is unrealistic. The lack of a visible, credible alternative to

bourgeois politics may explain not only the lack of excitement about Lions, but scanty

voter turnout in the U.S. as well.

Additionally, the movie gives little sense of how bad real-life conditions have become.

It offers no hint about the disintegrated infrastructure of cities, poverty, homelessness,

layoffs, lack of healthcare, desperation of youth, Dickensian conditions for the elderly

poor — the immense in-your-face evidence of the system’s failure.

Instead, it pursues a psychological view that an honest politician or administration is

not give up along the way (the film’s self-serving definition of apathy).

When it comes to women and people of color, Lions is an embarrassment. The professor,

who regards himself as having a gift for spotting students with promise, has apparently

not noticed any women who fit the bill. His African American and Latino “discoveries,”

however, are innocent, naïve, almost saintly stereotypes. Although they bloomed with his

encouragement, they decided to “make a difference” by quitting school to volunteer for

Army Special Forces. Their final scene is steeped in enough patriotic treacle to induce a

In contrast, how refreshing it would be see a film about the young students who have

for the military murder machine. Had the film’s two buddies encountered this resistance

movement, they might have changed course and confronted the status quo instead of

becoming pawns in service to a politician’s White House ambitions.

Stop the insanity! Akin to a horror movie audience screaming, “Behind you!” as a

monster creeps up on its oblivious victim, a Lions viewer is moved to groan, “Right in

front of you!” when one character, the journalist, almost grasps the bigger picture.

Roth, like the Vietnam-vet professor, has been around a long time. Each time she’s

set her hopes on a politician — Senator Irving, for one — she’s been disillusioned.

Ironically, it was her adoring article for Time magazine that put him on the cover and

launched his career. With disbelief at what she now hears, Roth pointedly questions

Irving, who parries with patriotic hyperbole such as “I won’t see this country humiliated

The editor refuses to print it as Roth sees it, threatens her job and walks out. Quick-cut

to the listless student, watching the Shopping Channel as a news-line trails along the

write it? Who knows?

a different result. Lions is a case study of the application of this idea to making social

change: after a point, it becomes loony to not connect the dots and choose to get off

the system’s sad-go-round. Coming to the decision to dump the entire mess would be a

freeing first step on the road to sanity. 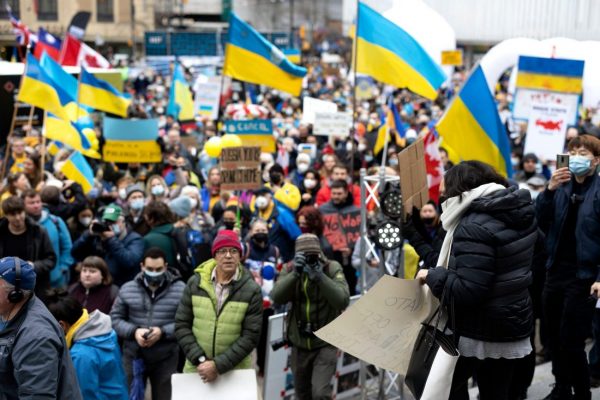