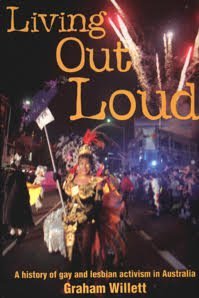 While reading Living Out Loud: A History of Gay and Lesbian Activism in Australia, an item on the TV news caught my attention — the Gay Games are coming to Sydney in 2002! The Chief Executive of the Board predicted more participants than the Olympics and Gay Games profits boosted through queer visitors booking out Sydney motels and restaurants. Living Out Loud by Graham Willett is a remarkable book analysing 40 turbulent years’ activity which has seen the transformation of homosexuals from a closeted and vilified minority to a respectable community whose well-heeled members are now openly courted by corporate Australia.

Willett’s history is rich in detail. An activist in Gay Liberation politics since the late ’70s, Graham Willett is now an academic at Melbourne University. He is the President of the Australian Lesbian and Gay Archives and uses this collection extensively.

It is impossible to miss the theme of Living Out Loud. Decades of the coming out, campaign meetings, consciousness raising, conferences, speeches, lobbying, letters to the editor, radio programs, petitions, graffiti, fundraisers, zaps, publishing, protests, arts projects, motions, public meetings, alliance building, industrial action, court cases, poster runs and debate around program and tactics really made a difference. Compared to 1961, Australia is a vastly different place for gay men and lesbians in 2001 — because many thousands of activists fought for change, won significant reforms and are prepared to keep up the struggle to defend and extend these gains.

I had mixed feelings reading Living Out Loud. The Australian Sections of both the Freedom Socialist Party and Radical Women were born in the gay liberation movement. Our first Australian members were lesbian and gay Marxist feminists who could not find a home in the existing Left organisations which tended to see straight, white, male, blue collar unionists as “real workers” and, at best, reduced gay rights to an “add on” democratic question. I felt immense pride as I reflected on our two decades of contribution to the collective struggle. But at the same time I felt anger at the relentless conservative drift by a once radical movement, increasingly absorbed by the quest for mainstream credibility and respectability.

Contemporary queer moderates — the type more comfortable discussing sponsorship deals than struggle — stand on the shoulders of many brave and bold visionaries. Willett describes the earliest recorded attempt to raise the issue of homosexual law reform in Australia. In 1958 Laurie Collinson, a Jewish Communist homosexual teacher and poet, wrote to the Homosexual Law Reform Society in Britain to explore the possibility of establishing a similar association in Australia. Collinson took steps to form such a society here, but it failed to take root.

But by the mid 1960s, homosexuality was on the political agenda. Decriminalisation was freely discussed in liberal circles, and there was a new level of tolerance. Feminist, Beatrice Faust, was a prominent spokesperson during this era which came to a sudden end with the arrival of autonomous organising: “in July 1970 the space cleared by the new liberals was to be noisily occupied by lesbians and gay men themselves, raising their voices and flinging their bodies into a movement that in the subsequent quarter century was to transform homosexual life and the society of which it was a part.”

Influenced by the movement against the Vietnam War and Women’s Liberation, Gay Liberation was radical and counter-cultural. The new movement rejected notions of “acceptance” and “tolerance” — instead demanding complete freedom. Willett describes it this way: “…if oppression was to be eradicated, society had to be transformed — replaced by ‘a new society, open and (sex) role-free,’ as the Melbourne University Gay Liberation Group wrote…The struggle for gay liberation was therefore a broad one, fought on many fronts and alongside many allies: Gay Liberation has a perspective for revolution based on the unity of all oppressed people. There can be no freedom for gays in a society that enslaves others through male supremacy, racism and economic exploitation (capitalism)…The goal was freedom: freedom from personal oppression and sex roles; freedom for all, gay and straight, women and men — a recognition of the natural right to diversity that all human beings had. These are very much more ambitious demands than anything imagined by the liberals of the 1960s.”

These ideas were still popular on campus when I joined LaTrobe University Gay Society in 1979. Activists focused on identifying the source of gay oppression and adopting strategies to match. We understood that sexism is at the root of gay oppression. The patriarchal nuclear family arose to entrench women’s status as chattels. Alternative ways of living and loving challenged the family, an institution which capitalism relied on to provide crucial social labour for free.

Living out Loud is beautifully illustrated with photographs, leaflets and cartoons. The role of the family is cheerfully mocked in one of the most popular posters, produced by Campaign Against Moral Persecution. Two gay activists, John Ware and David Widdup, pose in the style of an old Victorian photo.  Ware, the patriarch dressed in a suit, stands stiffly. He places his hand firmly on the shoulder of Widdup dressed in a floral shirt. The docile Widdup cradles a puppy.

The success of the movement, informed by this radical analysis, ironically created a space where a minority of homosexuals, mostly wealthy white men living comfortably in inner city neighbourhoods, started to reject struggle as outdated. There had always been conservative homosexuals who craved acceptance, not radical change. But by the early ’80s, this group began to challenge for leadership of what became called the “gay community.”

Willett’s book traces this emergence of a gay bureaucracy. Subtle shifts in the language took place: “oppression” was replaced by “discrimination,” “liberation” with “rights” and “movement” with “community.” Movement newsletters and magazines were gradually replaced by commercial gay press, funded by advertising which shaped the image of what one must buy to live a queer lifestyle. Willett explains how the emergence of HIV/AIDS in 1983 created the conditions — a partnership between government and the new leaders — which further entrenched this bureaucracy.

This layer — which fits the description of what Russian revolutionary, Leon Trotsky, describes as the middle caste — is a contradictory phenomenon which operates in the gay community in much the same way as the ACTU and other officials function in the trade union movement. These reformist leaders keep the movement within acceptable limits. Claiming to represent the interests all gay men and lesbians, the role of these functionaries is to pacify the community and keep its demands modest, single issue and respectable. Mardi Gras and the Pride Marches are classic examples — these events have become little more than corporate-sponsored celebrations of identity.

The breadth of ideas and strategies discussed in Living Out Loud gives the reader an invaluable opportunity to compare approaches. Graham Willett lets the competing voices speak for themselves. Writing within the framework of academia has its limits: I found Willett unnecessarily shy in making his own views known. Some of the most compelling and educational sections of Living Out Loud are where he takes a side. The chapter titled “And the last shall be first” compares the campaigns for law reform in West Australia and Tasmania. In WA the gay bureaucrats held sway, a compromise deal was struck and the outcome limited. In Tasmania, the campaign had a strong activist base and set out to win over the majority of Tasmanians. Activists refused second-rate law reform and won the most liberal laws in the country.

In the conclusion, Willett is critical of the quest for respectability which results in the issues faced by gay youth being forgotten by many of their seniors. Willett argues that: “historically young camps were inducted into the scene by older men, ‘aunties,’ who performed a recognised, valued and regulated function within the scene.” Willett suggests that HIV may have created a generational suspicion, and the willingness of law reformers to accept unequal age of consent laws in WA and NSW may also have contributed.

This history is the first full-length national account of the achievements of the lesbian and gay movement in Australia. Living out Loud is a powerful antidote to the narcissistic individualism which gripped the community in the ’90s. If you harbour a passion for liberation, this book is for you.