The Victorian government must end the dangerous farce of privatised public transport! 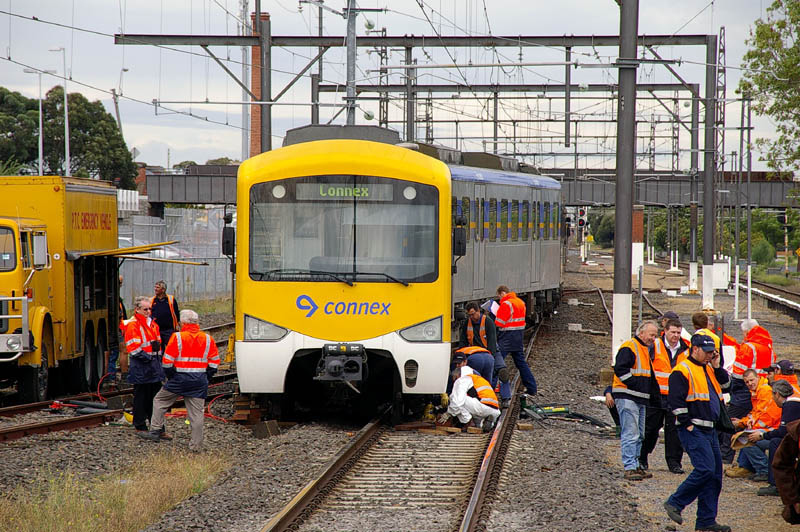 Poorly maintained signals led to this derailment on 3 May 2007. No
one was injured — this time.

Melbourne’s most modern trains are a safety hazard. They should not be in service. One model, built by Siemens, has a fundamental brake problem that will only be fixed with a costly engineering retrofit. The other, built by Alstom, also fails brake tests and is limited to 90 kilometres per hour. But that’s not the real hazard. Imagine yourself on a crush-loaded “X-trapolis” train on a 40ºC day. The overhead power fails. The ventilation stops, because the fans are not connected to the battery circuit. Within minutes, the temperature reaches 70º and people begin to collapse. In a panic, commuters operate the emergency door releases. Hundreds jump down onto the relatively cooler tracks. Then, at 80 kph, an express comes through.

Safety has been compromised, staff numbers have been decimated and services have been slashed. In 2007, trains run on a slightly augmented version of the 1992 Christmas timetable. And all this costs more than it did under public management. That’s because, from staff training to maintenance and system expansions, the government pays for everything. We pay for everything. For our money, we get a third-rate service. Safety should be the number one priority for a railway network. And on paper, it is. Safety auditors are presented with boxes of checklists, all neatly filled in and signed off. Each year, the auditors nod approval. And each year, the basic infrastructure falls further into obsolescence.

Track maintenance is a case in point. The contractor is only required to maintain the railway itself to the standard it was at privatisation in 1999. Broken or cracked rails are patched, not replaced, and the patches are left for years. Severe speed restrictions exist in many places, because there is no preventative maintenance. Watch out for chaos if heavy rains come, because the drainage has been compromised. Why pay staff to maintain drains in a drought?

Overcrowding of the reduced services is legendary. It led to another farce. The government decided to scrap the older Hitachi trains as soon as it could. Many carriages were sold to collectors or as farm sheds. Then the penny dropped – there weren’t enough trains. So the government was forced to buy back some of the carriages at inflated prices. Ten new trains have been ordered, but it will be next year before they roll off the ship. Meanwhile, the X-trapolis trains are already showing signs of advanced wear, which means that replacements for those carriages will need to be planned, soon. Most trains are engineered to last 30 years. These are engineered to last 15.

The underlying problem is this: the franchising of the networks made no provision for the massive upgrades and expansion of public transport, which are already overdue in our sprawling city. And while the government can find endless billions for tollways, investment in transport infrastructure is negligible by comparison. In 15 years, when the price of oil forces most of us to abandon our cars, these huge tracts of bitumen will lie idle as the congestion in the train system brings it to a halt.

To cope with the increasing passenger loadings, Melbourne needs planned expansion of the network, together with upgrades to trains, trams and passenger access. Urgent investment to bring the tracks and signals up to modern standards is also required. And the newest trains have to be fixed. A costly exercise to redress the fact that they were never fit for their purpose: the safe, efficient movement of Melbourne commuters.

On November 30, 2007, the Bracks Government has the opportunity to tell the private managers to hand back the system within 12 months. Demand that they do exactly that. A vital part of our city’s infrastructure depends on it.