The ABCC must go!

The Howard government has gone, but one of its most repressive anti-worker bodies —

in October 2005, this body was given sweeping powers that remove the most basic of

civil rights from building workers. In gathering evidence, the ABCC operates in absolute

secrecy. Workers summoned before the commission can have legal representation,

but neither the workers nor their lawyers may speak about the process, under threat of

imprisonment. Workers compelled to appear before the ABCC have no right to silence

questions put to them. 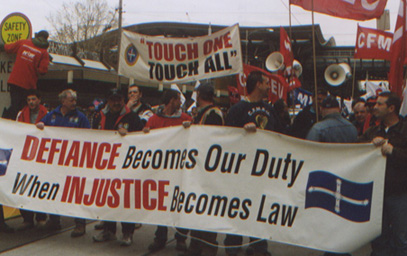 Building workers were a mainstay of mass protests against Howard’s
industrial laws. Photo by Alison Thorne.

In the lead-up to the federal election, determined to flaunt its pro-big business credentials,

until 2010, when its powers will be transferred to a division of the Fair Work Australia

inspectorate. The ALP leadership reneged on an earlier unanimous decision of the ALP

National Conference to abolish the ABCC. On 28 August Kevin Rudd and Julia Gillard

announced their “Forward with Fairness” Industrial Relations Policy, in which they

promised to “get the balance right between fairness and flexibility.” The policy contained

ten elements, including “a stronger cop on the beat in the building and construction

The building industry has a strong history of “closed shop” unionism (union-only labour),

and this is what the ABCC is out to smash. In August 2007, the ABCC declared it illegal

to fly the Eureka flag on building sites, claiming that the very sight of this flag — used

article in The New Matilda: “Thus, showing the Eureka flag denies people the right not

Relations Act. If this logic were taken to its natural conclusion, the ABCC would prohibit

any reference to unions at any workplace, on the footing that to be told of the existence of

a union implies that you have no choice but to join. Thus, in the anti-union Utopia of the

ABCC and its political masters, ‘freedom of association’ means you are not allowed to

know of the existence of unions, although you are free to associate with them if you find

the ABCC. The flags, which sell for $100 each, raise money for the Austin Hospital for

cancer support, as part of the fund named after the former union militant who died of a

The ABCC has persuasive powers to ensure that companies comply. Employers who

The Construction, Forestry, Mining and Energy Union (CFMEU) understands that

capable of forcing its abolition.

Every member of the CFMEU was given a copy to share with friends and neighbours. It

was also sent to members of the ACTU Executive and to ALP members of parliament.

In the film, union members from both Victoria and Western Australia speak about being

pursued by the ABCC. We meet Victorians Brodene Wardley and Charlie Corbett.

Wardley, a single mum who is a health and safety delegate and crane driver, was hauled

before the ABCC to answer for herself. Her crime? She had called a site meeting after a

bus carrying construction workers was nearly hit by a train on a level crossing. A short

about his role in a dispute where he successfully defended an apprentice.

We also get to hear the story of the WA107. This is the collective name for 107

workers on the Perth-to-Mandurah railway construction project who, in early 2006,

were threatened with fines of up to $28,600 each for taking “unlawful strike action” to

Charlie Isaacs, one of the 107, relates how the workers made a democratic decision to

strike — despite a recommendation from CFMEU officials not to, because this action

could trigger the anti-union laws. The ABCC proceeded to serve each of the 107 workers

Isaacs tells it like it is: “It all comes down to one thing. If you can’t stand up for what you

believe in, then you’re a slave. And I ain’t no slave.” Charlie Isaacs is right. We are not

slaves, and that’s why we must demand that all charges be dropped against the WA107!

We cannot accept laws that are about frightening building workers into submission.

The Freedom Socialist Party is hosting a screening of Constructing Fear, Thursday, 28

to build a movement that will dismantle the ABCC. This anti-union commission must go

Relations (DEWR) issued some extraordinary instructions to managers in government

departments. They were to immediately cancel all leave — flex leave or annual leave

of the Your Rights At Work campaign. Some managers were a little tardy to act on this

instructions, but others responded with extraordinary zeal!

The CPSU took this to court and, after a two-year battle, won a ruling that DWER, in

issuing this instruction, was unlawfully discriminating against unionists in what the

court described as “a serious contravention of the law.” The CPSU argued that the

commonwealth government had breached the freedom of association provisions under

was only $3,000 short of the maximum penalty that could be applied under the Act. The

CPSU used the money to help keep Your Rights At Work advertisements on air.

The court ruling is a very important one, because it confirms that public sector employees

are entitled to complete freedom of political expression, in their own time. It also

on their day off.

On August 30, 2007, Australians for Native Title and Reconciliation launched Hard

Kidd. The meticulous 146-page report details the extent of the theft of Indigenous wages

in every state and territory of Australia.

Strait Islander people for most of the 20th century. Much of this money was held in trust

and has still never been paid to its owners. Trust account funds were transferred to public

revenue, or disappeared through fraud or negligence along with many of the records. This

practice condemned Indigenous families to poverty, while their unpaid labour was used

to establish lucrative industries, such as beef cattle and pearling.

Queensland claimant, Marjorie Woodrow, who authored the forward to the report,

expresses her frustration that the stolen wages have still not been paid. “You’d think they

would just write a cheque and be done with it. We could have had our own homes from

the wages we are owed, and had the ability to set things up for our children. It breaks

your heart to see our children still struggling. Why couldn’t they just pay us outright, not

like that foundation in Queensland that you have to ask for money, filling out paperwork.

It’s unsatisfactory. It’s like we still have to beg. The money cannot replace what has

been lost. The government needs to know, to understand how much pain we suffered.”

wrote the introduction to the report. He describes the unresolved issue of stolen wages as

one of the nation’s greatest barriers to reconciliation and justice for Indigenous people.

is unchallengeable. It does this effectively through a series of essays, each of which

In 2006, over 600 trade unionists, academics and activists from all over the world got

organising. The book is based on this conference.

Edited by Kate Bronfenbrenner, the publication looks at unions’ successes against

global corporations. It focuses on a number of key sectors, including dockworkers,

manufacturing, food processing and services, and finishes with a look at key lessons for

In her conclusion, Bronfenbrenner says: “what the cases in this book show is that the

corporations and win.” She explains: “the first step in global wealth redistribution is

stopping the race to the bottom.” To do this, it is essential that workers in advanced

south. She stresses the importance of emulating unions in Latin America “which do not

limit their efforts to the organising and bargaining arena.” Bronfenbrenner argues that

real change means creating a system where “one does not accept that the IMF, World

Bank and WTO set trade and investment policy.” “Global unions,” she says, “are the