After more than a decade slugging it out through the legal system, on 23 January the Sami people achieved a precedent-setting win in the Swedish Supreme Court, securing exclusive rights to determine who could hunt and fish in one part of their ancestral territory. Sápmi, the traditional word for the Sami nation, stretches across the Arctic Circle through the northern parts of Norway, Sweden, Finland and Russia.

This win applies to the Sami village of Girjas. Not a village in the traditional sense, Girjas is an administrative entity linked to a geographic area in which all the members have the right to herd reindeer, hunt and fish. Girjas covers 5,500 square kilometres from the Norwegian border up towards the Baltic Sea. There are 51 Sami villages in Sweden.

In 1993 the Swedish Parliament enacted a fiercely contested land reform bill, which revoked the right of the Sami to determine who could hunt and fish on their land. The result? Without drawing on traditional knowledge, licences were granted indiscriminately and damaged the reindeer-herding economy. In 2009 Girjas sued, mounting a case for exclusive rights. The Swedish state, which has not ratified the 1989 Indigenous and Tribal Peoples Convention, argued this was an administrative matter that had nothing to do with Indigenous rights, claiming it had no obligation to recognise the Sami.

The Supreme Court did not agree, ruling that the Sami village has the sole right to permit hunting and fishing in the area, drawing on the concept of time immemorial. In law, this means that a property or a benefit has been exercised for so long that the owner does not have to prove how they came to own it. The court explained, “The main reason for our decision is that the Sami have been using this area since 500 A.D.”

While this case is specifically about Girjas, the Sami people are jubilant, recognising that it has international implications for Sami communities across Sápmi and will also strengthen the position of other First Nations people. The ruling, used for the first time in Sweden, extended the legal doctrine of “prescription from time immemorial.”

Classic colonisation. There are about 90,000 Sami people, with up to 30,000 living within the borders of modern Sweden. The Sami have a deep connection to the land and a strong economy based on their traditional way of life. They’ve lived in the area for at least 3,500 years, initially occupying the whole of Fennoscandia. But from the Middle Ages, they were pushed into the Arctic Circle as settlers migrated north, stealing land and profiteering by plundering resources.

The pattern of genocidal practices that the Sami face is almost identical to land grabbers’ encroachment on the territory of other First Nations. Children stolen from their parents. Language and culture ruthlessly suppressed. Traditional practices displaced through the imposition of Christianity. Graves robbed and remains used for experimentation. Today, there are still 11 Swedish institutions that have Sami bones and skulls in their collections!

Sweden also has a shocking history of eugenics. A program of forced sterilisation began in 1935 and ran for four decades, with Sami women amongst those targeted. Through systemic racism, Sami were made to feel ashamed of their heritage and encouraged to assimilate.

Heroic resistance. The defiant Sami are survivors with a long history of struggle. The first Sami National Assembly was opened on 6 February in 1917. Attended by 150 community leaders, it was an initiative of Elsa Laula Renberg, a leader of the Sami Women’s Union. This pioneering gathering is celebrated each year as Sami National Day. Participants demanded the control of reindeer-herding and the establishment of Sami schools where children would be educated in their language. Renberg herself was a tenacious organiser. In 1904, she was the first Sami woman to be published, with her pamphlet promoting land and water rights. She was a strong advocate of women’s education and inspired other women to work with her.

The Sami are not only winning in the courts but also extracting concessions from the corporations. When Disney’s hit animation Frozen expropriated Sami culture, community organisations refused to put up with it. Sami won the right to join an advisory group for the sequel to ensure their culture was accurately represented. They extracted a key concession, winning the co-release of Frozen 2 in Northern Sami language.

Like first people everywhere, the Sami demand that their sovereignty be recognised. There are a number of Sami parliaments. The Swedish one was established in 1993. But these bodies are mostly advisory, under-resourced and have few real decision-making powers. Many Sami express their dissatisfaction by refusing to participate in elections. There’s also widespread mining across Sápmi. Much of this is based around the city of Kirunu where LKAB, Sweden’s largest mining company, operates a huge iron ore mine. The Sami are meant to be consulted about mining, but in reality they have little say.

Sami want to govern their own affairs, control their own land and resources and their culture to thrive and be respected. They reject division through the imposition of artificial borders.

The Sami are custodians of the land and insist the natural world be respected. Like the First Peoples of the Pacific, they are on the front lines of climate change. The Arctic is warming twice as fast as the global average. Unprecedented drought and fires have impacted grazing lands and traditional migration routes disrupted by dangerous thinning of ice sheets. Lichen, which is a source of food for reindeer, is in decline. Sami people are resisting and demanding a voice. It took seven years to gain a majority on the board that manages the Laponia World Heritage Area, which covers a large part of Swedish Sápmi, but the Sami won this.

Growing polarisation. Solidarity with the Sami people is growing in Sweden and elsewhere. The youth climate strike movement, Fridays for the Future, recognises indigenous peoples as those who are first and most affected by global warming. Sami youth held a climate justice rally in the Arctic Circle community of Jokkmokkx, to mark Sami National Day this year. Greta Thunberg accepted their invitation to attend and speak, paying tribute to Sami leadership.

It is not all good news. The far right is growing, and anti-Sami bigotry is on the rise. The Swedish parliamentary system is based on proportional representation, with government based on parties forming blocks. There’s been a disturbing rise in support for the Sweden Democrats, a party with roots in neo-Nazism. They’ve built support using law-and-order hysteria, anti-immigrant scaremongering and claims that so-called “Sami privilege” is undemocratic. They call for the Sami Parliament to be abolished.

An opinion poll last November saw the Swedish Democrats pull ahead of the Social Democrats for the first time, registering 24% support. Sweden has long held a reputation for the success of its welfare state, but this is being steadily eroded by waves of neoliberal attacks. Swedes are facing increased economic deregulation and privatisation, leading to austerity and growing inequality. The richest 10% own 60% of the wealth. In this environment, the politics of a scapegoating can find fertile ground. To prevent this, the culprit of capitalism needs to be exposed and solidarity fostered, prioritising the demands of the most oppressed.

Solidarity is urgently needed. The recent court ruling upholding Sami rights prompted an anti-Sami backlash, including a widespread racist social media campaign. Members of the Girjas community and the neighbouring village of Baste have received death threats. In February, Sami began finding mutilated reindeer carcasses by the side of the road. Some reindeer had been dismembered and stuffed into plastic bags. All who crave a better world must stand with the Sami to stop this harassment.

Winning the exclusive right to issue hunting and fishing licenses in Girjas is an inspiring assertion of sovereignty, which can be used to extend Sami rights and the rights of First Nations everywhere. The Freedom Socialist Party unconditionally defends the right of the Sami and all other First Nations peoples to sovereignty. Indigenous people, including the Sami, are key leaders of struggles against corporate vandals and in defence of precious natural resources. We stand with them.

ALSO IN THIS SERIES:

Sovereignty on trial — The tale of two court cases
Deportations prevented, but dispossession sidestepped by High Court of Australia 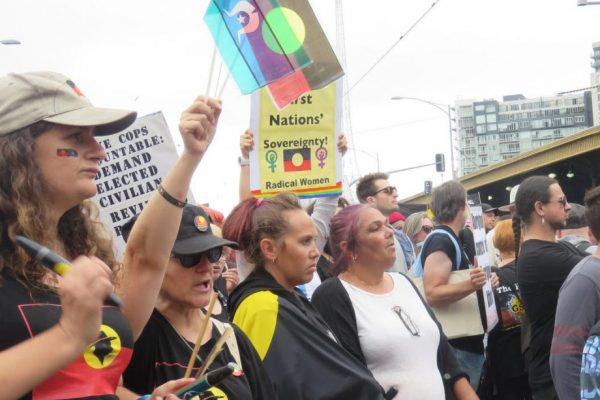