“I don’t expect any reform to last longer than the willingness of people to fight to retain it and longer than a progressive period in history will last,” said Clara Fraser. She was acutely aware that under capitalism, as soon as any progressive reform is won, those who opposed the change would be organising to overturn it. Although Fraser, who co-founded both Radical Women and the Freedom Socialist Party, died in 1998 she could have been talking about the backlash that commenced the moment the Australian Parliament conceded to popular demand and legislated same-sex marriage equality in December 2017. As we argued then (See: FSO editorial — How to make change: generations of campaigners win marriage equality, January 2018), the battle for marriage equality was hard-fought and finally achieved by more than half a century of mass struggle. We also noted that another battle loomed, because reforms are never stable.

Concession to the losers. In 2004, conservative Prime Minister John Howard imposed a ban on same-sex marriage. Opposition to the ban became the focus of a lengthy national campaign, which put down deep roots in workplaces, schools and communities. For 13 years, as support blossomed, both the Coalition and Labor pandered to the conservative minority, stubbornly refusing to back equality. Their battle plan was a gamble that growing support could be quashed through an ugly and divisive marriage equality plebiscite. Anti-marriage equality advocates pumped out homophobic and transphobic fear mongering, bigotry and bile. They lost, with almost 62% voting yes. Since its legislation, support for same-sex marriage rose to 75% by 2019, with significantly higher backing among young people.

Opponents howled that marriage is a religious institution, claiming the changes impinge on their “religious freedom.” This is despite the fact that 80% of marriages are secular. With the public vote finalised, the government still had to get the change legislated. As a concession to the most reactionary forces in parliament, it announced an enquiry into religious freedom conducted by Phillip Ruddock. This prominent conservative finalised his review in May 2018. The explosive recommendations were kept under close wraps but leaked in the middle of a by-election in inner Sydney’s secular and queer friendly Wentworth electorate. Among them were greater powers to religious schools to expel students and fire teachers on the basis of their sexuality, gender identity or relationship status.

Current Prime Minister Scott Morrison is a conservative Pentecostal Christian who trumpets his religious beliefs. He went to the last election promising to legislate religious freedom. Two attempts have stalled, both failing to win support. Feminists, socialists, unionists who work in religious institutions, secular people and the LGBTIQA+ community were scathing of the proposed law which would entrench religious privilege. Conservative Christian groups, such as the Australian Christian Lobby (ACL) and Freedom for Faith (FFF), the main advocates for the change, say it does not go far enough!

With a federal election looming, the Morrison government has put religious freedom back on the political agenda with a new draft to be introduced by December.

Is there a gap? The government will try to package its plan as being about fairness and not discriminating against others. In reality, it is anything but.

When it comes to religious discrimination, there’s little evidence that Christians face any. In contrast, Muslims face widespread prejudice. A report by the Human Rights and Equal Opportunity Commission released in July found that 80% of Muslims had experienced discrimination based on religion, race or ethnicity. Sexism compounds the targeting of Muslim women.

It is already against the law to discriminate against someone because of their religion in all states and territories, except New South Wales and South Australia. These states should follow suit.

While not an instant panacea, these laws are a useful tool for those facing systemic Islamophobia. They can be used as a tactic to strengthen the necessary collective resistance, and build broad community support to challenge the entrenched harassment that many face.

Existing laws also need changing to immediately scrap the many exemptions in place, which allow for organisations run by religious institutions, such as schools, hospitals and aged care, to discriminate. These exemptions make life hell for queers, feminists, de facto couples, divorcees and single parents, many of whom are forced to be secretive about who they are when they’re at work.

Campaigners for “religious freedom” laws will not be satisfied once every jurisdiction includes religious belief. They are not interested in anti-discrimination law. They want special treatment.

A far-right battering ram. Those driving the push for a Religious Freedom Bill demand measures they can use to impose their conservative world view on the entire community.

This noisy and dangerous minority are rightwing Christians, who have also been flocking to the ranks of the Liberal National Party Coalition. Key proponents are the ACL and FFF. Both are anti-choice and support conversion therapy. The former has been treated as a “peak body” for Christians since it won the backing of John Howard. In reality it represents a small, mostly Pentecostal wing of Christianity. FFF is a conservative Christian Think Tank. It opposes allowing the increasingly secular population to answer “no religion” on the Census and is hostile toward the work of the Safe Schools Coalition to stop kids being the target of homophobic and transphobic bullying.

What’s at stake is the introduction of legislation that gives conservatives the unfettered right to bully, harass and discriminate under the cover of “religious freedom.” Such measures would override health and safety legislation, which requires employers to keep workplaces free from bullying and harassment. It would operate as a trump card to override anti-discrimination laws won through decades of struggle.

Legislation which advantages religious beliefs above all others are widespread in the U.S. and have been used to wind back reproductive health and equality measures. This tactic has paid off to the point where there is a very real possibility that Roe v. Wade, the landmark case which legalised abortion throughout the country, may be overturned.

Religious freedom laws could be used to defend violence against women on the grounds that the Bible tells wives to submit to their husbands. They could be used by a worker to refuse to report to a female supervisor, because the Bible says no woman should have authority over a man. A pharmacist in a small country town could claim religious freedom to refuse to dispense puberty blockers or hormone therapy to a transgender person. The only GP in a remote community could decline to prescribe contraception to a single woman, because they believe sex outside of marriage is a sin. A doctor could refuse to refer a patient with a disability wanting advice about specialist stem cell treatment. Religious bigots and bullies will be given a green light to spew hatred in every workplace in the country.

Religion is big business. The rights of huge sections of the workforce are at even greater risk if their bosses are given more rights than they now have under the current “exemptions” regime. The spree of privatisation and outsourcing, which gathered pace in the 1980s and hasn’t slowed, exacerbates the problem. Swathes of services as diverse as job network providers through to disability services, all once provided by the public sector, have been outsourced to religious institutions. A massive 40% of all aged care facilities are now run by religious organisations and charities. Even the provision of the largest so-called “state-run” COVID-19 vaccination centres are in reality outsourced to a religious institution.

Healthcare unions and the Australian Medical Association are concerned that established standards and ethical frameworks, which underpin healthcare roles, are at risk. For example, the Medical Board Code of Conduct specifies that doctors have a duty to make the care of patients their first concern. Healthcare workers could face reprisals if their ethical responsibility is at odds with requirements mandated by their employer on religious freedom grounds. 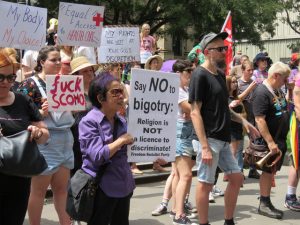 A call to action. The good news is that public opinion is firmly on the side of maintaining all the rights that implementing a Religious Freedom Bill would take away. Even those who hold religious beliefs are likely to disagree with clerics on issues such as abortion, contraception, voluntary assisted dying and marriage equality. For example, only 15% of Catholics oppose a woman’s right to choose. There’s widespread support to scrap religious exemptions, with 79% of the community opposed to religious schools being able to dismiss teachers on the grounds of their sexuality and relationships.

This passive support must be actively mobilised, just as it was to win marriage equality. For years, despite opinion polls, both the Coalition and Labor stonewalled on legislating equality. Today, the toxic push for “religious freedom” comes from within the Coalition ranks. Meanwhile, in the lead-up to the next election, Labor is scared to stand for anything much.

What’s needed is to forge a broad, democratic and feminist united front — with trade unions playing a pivotal role — to activate the majority threatened by the government’s plan. The immediate goal must be both to stop the Religious Freedom Bill and to eliminate the religious exemptions from current anti-discrimination measures.

It is crucial to emphasise that the intention of the bill is to give the far right a powerful tool to dismantle decades of progressive reforms won by feminists, LGBTIQA+ liberationists, unionists, socialists and civil libertarians.

In the spirit of Clara Fraser, Radical Women member Amelia Kirk-Harkin drew support when she recently posted an impassioned appeal on TikTok, proclaiming, “Fear mongering is a favoured practice of the far right. For every gain we make, there is a backlash. When marriage equality was won, the government retaliated, pledging a Religious Freedom Bill. Make no mistake, this is not about religious freedom — it is about the right to discriminate. I am sick of this tug of war, fighting to hang on to rights. I feel that we simply need a revolution.”