Change the rules through union power, seized by workers! 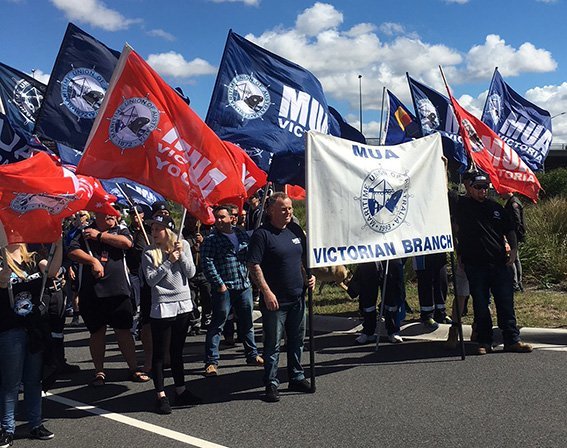 Full-time, permanent, award, conditions, pay rates, safety, security, satisfaction, career, retirement. These were once everyday words in the workplace. So was “strike,” which is how workers won these entitlements. They’re now practically extinct, along with “job,” which used to mean gainful employment on a livable income.

New times, different language. Capitalism’s heyday is long gone. Today’s conversations are about underemployment, joblessness, insecurity, wage theft and the working poor. Pundits downplay the crisis, but statistics don’t lie. Profits bobbing up and down on the charts shows that the economy is actually drowning. The ups come at great cost to workers, and the downs warn of things to come. Statistics for March 2017 revealed Australia is experiencing the highest profit growth in 15 years, while wages growth is the lowest on record. The top 1% owns more than 22% of the wealth — that’s more than the bottom 70%. Oxfam reported last year that the world’s eight richest men have more wealth than half the global population.

The Australian Council of Unions (ACTU) says income inequality is the worst in 70 years. The national peak body of unions blames this on decades of conservative rule and corporations that are “too powerful.” Forty percent of Australians are in insecure work. More than 1 million are underemployed, needing more hours to scrape by. Slightly more are unemployed.

And the unions? Membership keeps dropping. According to Australian Bureau of Statistics figures in May 2017, just 9.3% of private sector and 38% of public sector workers belonged. Young workers are almost absent: 4% aged 15 to 19 and 7% aged 20 to 24. Women are 51% of unionised workers.

Neoliberalism, accompanied by the very idea that capital and labour have common interests, has drastically changed people’s lives and diminished the union movement. As the global crisis deepens, capital demands more from workers, and unions acquiesce. In the mid-1980s, the Labor Party and ACTU brokered the Prices and Incomes Accord. It has been through many new brandings, but the purpose remains essentially the same: keep profits growing and workers compliant, by any means necessary.

ACTU’s backflip. When Sally McManus became the ACTU’s first woman secretary last year, she told ABC TV’s 7.30 Report that she had no problem with workers breaking laws that are unjust. She was defending the Construction, Forestry, Mining and Energy Union (CFMEU) and the right of unions to fight ever-worsening conditions.

Responses to McManus’ statement were immediate. Unionists cheered. Big business and the Turnbull Coalition government went ballistic. It didn’t take long for the ACTU to tame its message. Gone was the defiant call to resist. The laws, it said, are merely “broken.” The ACTU then launched its Change the Rules campaign to fix them.

Just prior to McManus taking office, penalty rates — higher pay for work on weekends and public holidays — came under concerted attack by hospitality, fast food, pharmacy and retail employers. The Fair Work Commission (FWC) complied and cut penalty rates for these workers. This constitutes a wage reduction of 25-50%. It affects at least a quarter of Australia’s workforce and will surely flow to other industries.

Change the Rules addresses crucial issues for working people, particularly those who are female, young and from overseas. It exposes the growing inequality and laws that restrict workers’ ability to collectively organise and gives hard evidence of insecure work, the falling minimum wage, wage theft and a tax system that protects the rich.

The rules are working, for the bosses. The ACTU argues that, “because some people now have too much wealth and power, the rules no longer work.” Laws were once “fair,” it claims. Avoiding any mention of capitalism and its insatiable need for profit — made through the theft of workers’ labour — the ACTU is saying that capitalism can work and be “fair.”

This isn’t surprising, given the ACTU’s reason for being: to contain the conflict between labour and capital. Its role in bringing in the Accord is a prime example, as is its historical tie to one of capital’s most loyal managers, the Labor Party.

The Accord prepared the ground for today’s attacks on workers and their unions. In 1992, the Labor government brought in enterprise-based bargaining to replace the centralised system of setting wages through National Wage Cases.

The underpinning plank of this system is to tie wages to higher productivity. Enterprise bargaining is an isolating, usually protracted affair, especially for smaller or less unionised workplaces. It’s common for employers to stall bargaining, effectively freezing wages, or bully employees into accepting unfavourable agreements.

It has weakened the union movement. Not only must workers bargain separately as enterprises and workplaces, they must follow a strict rulebook. Industrial action is lawful (“protected”) only during a bargaining period. Even then, unionists have to jump a series of hurdles to get the FWC’s approval.

Compared to today’s “modern awards,” which are merely minimum standards, enterprise bargaining agreements deliver superior pay rates and conditions. However, enterprise agreements have dropped nearly 20% since March 2009, while the number of workers covered by awards has increased 13%.

Bosses aggressively push workers onto inferior agreements, and the industrial relations regime facilitates this. In 2016, Carlton United Brewery (CUB) appointed a new contractor. Fifty-five maintenance workers, members of the Electrical Trades Union, were then told they must re-apply for their jobs. Some had worked at CUB for 40 years! The new contractor offered a non-union agreement, which meant a 65% wage cut. It took a six-month union fightback, supported by a national boycott of CUB products, to force the brewery giant to re-instate the workers on the pay and conditions of their union agreement.

CUB may have lost, but its tactic is spreading. In June 2017, Esso in Longford, Victoria made 200 maintenance workers redundant and forced them to work through a subsidiary company if they were to keep their jobs. The subsidiary’s non-union contract represents a 15-30% wage cut and removal of core conditions. The battle, led by the Australian Workers Union (AWU), continues.

Last September, Murdoch University terminated the union-negotiated agreement covering 3,500 staff, forcing them onto the sub-standard award. This means a substantial pay cut, for some as much as $30,000! The FWC made a landmark ruling to allow this. Already bruised by unrelenting privatisation, Higher Education workers across the country are bracing for this new fight.

Bosses’ rules, bosses’ court. Government, bosses and union officials all say that the FWC is the “independent umpire.” It’s not. Established by the Rudd Labor government in 2009, a particularly tumultuous period for global capitalism, this tribunal has far-reaching powers — enabling for employers and punitive for workers and their unions. Tearing up an enterprise agreement, as it allowed Murdoch University to do, is one example. Bosses can get an order through the commission to return to work. They can sack workers for an alleged breach. They can sue individuals up to $10,800 and unions up to $54,000.

The Esso Longford battle has become a watershed. It went to the High Court, which, in December, made a precedent ruling: Unions do not have the right to take “protected” action during bargaining if they breach any order of the Fair Work Commission — including alleged breaches in the past. The court accused the Australian Workers Union of not “playing by the rules.” The AWU could face massive damages for work bans, which the court called “coercive,” during an enterprise bargaining period in 2015.

All unions are on notice. Justice Stephen Gageler, the one dissenting judge, called this decision a “sweeping denial” of rights that would reduce unions to “industrial cripples and outlaws.”

Break bad laws! The ACTU wants to “swing the pendulum back” to a mythical time when laws were “fair.” It’s talking about a time when big business could concede wins to militant unionism, such as social security benefits, penalty rates, leave entitlements, wage rises and equal employment opportunity. Capitalism can no longer make concessions. With the economy in serious and irreversible peril, the capitalist class is clawing it all back.

Workers must swing the pendulum back to the days of union militancy — more unified and powerful than ever before. Working class history is filled with examples of unionists flexing their muscle and defying the rules. In 1969, a million workers stopped work across the country and freed Tramways Union leader, Clarrie O’Shea, who had been fined and jailed for refusing to hand over the union’s accounts to the industrial court. The Builders Labourers Federation, forerunner of the CFMEU, was so feared by bosses that the state eventually deregistered it. “Like the BLF” was a byword for militant unionism that connects industrial and social struggles, such as the famous Sydney Green Bans that saved working class neighbourhoods from development in the 1970s. The Victorian nurses’ strike in 1986 shattered sexist stereotypes: these unionists led the longest strike in Australian history over pay, conditions and staffing and brought the community behind them. Who remembers the 1992 Victorian general strike against Premier Kennett? A million unionists walked off the job. Joined by the community at large, they choked Melbourne’s streets in a battle to stop the government’s anti-union laws.

The ACTU says, “The rules need to be re-written.” Yes, they must. But how, and by whom?

The ACTU’s “call to action” is to build a union movement that “demands our politicians rewrite the rules and keep employers in check.” We build the movement, it says, by asking workmates, friends and family to join the union. We send in stories so the ACTU “can tell them to Australia.” This won’t do it.

Militant, cross-union solidarity around the struggles of working people — from stopping the privatisation of Centrelink and winning back penalty rates to defending the AWU and CFMEU and ripping apart the straightjacket that is our industrial relations system — would not only swell the membership, it would make the union movement more powerful than any time in its history. Workers with the most to fight for — young, women, overseas, migrant, LGBTIQ, Aboriginal — would bring the courageous leadership this movement needs and re-build bridges between workplace and community fights.

Break the rules, then we can re-write them.

Debbie has decades of experience as a unionist in the community, banking and education sectors. She is currently a community member of the National Union of Workers.

What workers should know about price gouging