Remember where you were on September 20, 2019? It’s one of those memorable watershed dates. The global Climate Strike, launched on this day, was the largest climate mobilisation in world history. In that week, more than 7 million people took action on all seven continents — from Antarctica to the Americas, Africa to Asia and Oceania. From pre-teens to “baby boomers” and older, we were in the streets.

The youth-led, international strike was not a one-off event. It has been building up over four years, and it’s not going to stop.

Record-breaking droughts, heat waves and fires are scorching parts of the planet. Violent hurricanes, typhoons and blizzards rip through communities and countries. Rising seas are threatening lowland areas and island nations. Species not yet extinguished, ecosystems not yet ruined, livelihoods not yet destroyed, populations not yet displaced are under imminent threat.

The UN panel on climate change (IPCC) warned in October 2018 that we have 12 years — now less than 11 — to rein in global warming or face catastrophic consequences. The average temperature increase of 1 degree Celsius since the industrial revolution explains today’s unprecedented phenomena. If no steps are taken, we face a 4-degree rise by the end of this century, which, scientists say, can’t sustain human life. A 2-degree hike would still mean 10 million more displaced from their homes, the complete loss of coral reefs and fishery damage — affecting 300 million people — by 2030. The IPCC states that to avoid this, carbon emissions must be reduced by 45 percent, holding the rise in temperature at no more than 1.5 degrees, by 2030. 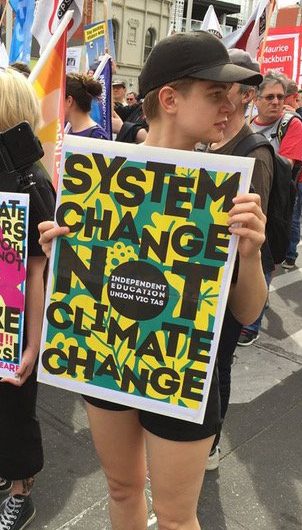 Young leaders step up. This year’s historic September global strike spanned generations, but it was overwhelmingly young, from early primary school upwards. International organising preceding this goes back to November 2015, when students walked out of their schools in 100 countries on the first day of the UN Climate Change Conference held in Paris. They demanded 100% clean energy, fossil fuels to be kept in the ground, and help for climate refugees.

Nearly three years later, Greta Thunberg, Swedish climate activist, then in the ninth grade, began her solo protest outside the Riksdag (parliament). Angered by the heat wave and wildfires that swept Sweden and inspired by the students of Marjorie Stoneman Douglas High School in Florida, who organised the

March for Our Lives against gun violence, Thunberg held her protest every day during school hours. Her protest and message on her placard, “School strike for the climate,” spurred on the movement.

School strikes erupted across the world, starting in November 2018. And they’ve been defiant. In Australia, for example, thousands of students ignored Prime Minister Scott Morrison, who insisted on “more learning in schools and less activism,” and held weekly Friday actions. International protest continued through 2019. Earth Strike — which describes itself as an international grassroots movement — called the September 20-27 Global Week for Future and organised a series of lead-up protests to educate and build it.

Rejecting capitalism. “System change, not climate change,” “Planet over profit,” “We can’t eat money and drink crude oil” are some slogans adorning the millions of colourfully creative placards, showing that young people know where to lay blame — not on individuals who drive cars, buy plastic-wrapped products or fail to haul household waste to recycling centres, but on the corporate polluters. Their warning: “Respect existence or expect resistance.”

This leadership extends beyond the climate strikes. The courageous stands of the Standing Rock Sioux Tribe against the construction of the Dakota Access Pipeline and the Djab Warrung people protecting their ancient birthing trees from road construction in central Victoria point to the magnitude of this fight to save the planet from corporate wreckage.

Young women, especially indigenous and women of colour, are the face of the global resistance. They are closest to the crisis: their lands are invaded by corporate predators or poisoned by toxic waste; their communities, neglected by government, most susceptible to climatic destruction; their homelands taken over by rising seas or turned into deserts; and their families displaced.

In the growing army of environmental defenders and leaders are Autumn Peltier, 15-year-old Wikwemikong First Nation water protector in Ontario, Isra Hirsi, 16-year-old co-founder of the U.S. Youth Climate Strike and Seed Indigenous Youth Climate Network organisers, Amelia Telford, from Bundjalung country in New South Wales and Nicole Hutton, descendant of the Garawa people of the Northern Territory. There are so many others. The sheer scale of resistance is showing the power of Autumn Peltier’s exhortation to the world to “warrior up.”

Warrior up the union movement. In Australia, unionists were visible on September 20. In Melbourne, for example, National Tertiary Education Union members organised a contingent. You couldn’t miss the big, green Rail, Tram and Bus Union banner. Flags of the National Union of Workers, Australian Education Union and Construction, Forestry, Mining and Energy Union and others were held high. Brightly colourful union T-shirts speckled the march. But workers participated on their own time: unions didn’t mobilise a strike. The ready answer from officials is that strikes are illegal (except during bargaining periods). This begs the question: what will it take for unions to show some union power?

Montreal’s climate march of 500,000 was the largest in the world. Despite laws prohibiting political strikes, 11 union locals representing 7,500 workers went out, shutting down most of the province. Rank-and-file teachers involved in the grassroots environmental movement started organising for this in January. They wanted a real climate strike. They worked outside the formal union structures to get motions passed at local membership meetings. This led to members coordinating without official interference. They were united and made State authorities back down from their threats of hefty fines. Students across schools and universities then voted to strike. Due to this, 150 businesses also closed for the day, allowing workers to join the march.

From resistance to workers’ control. In Ecosocialism: The solution for survival on planet Earth, Steve Hoffman says this: Energy corporations “have the political power to make sure that capitalist governments do not require them to shift to renewables until the last oil well is dry and the last piece of shale is fracked.”

Many Melburnians witnessed this at the climate protest outside the International Mining and Resources Conference in late October. Police, armed to the teeth with batons, pepper spray, guns and horses, brutalised protesters. This didn’t dent the protest, but many were injured and arrested. Victorian Premier Andrews congratulated Victoria Police, and Prime Minister Morrison flagged legislation to proscribe any form of protest, including consumer boycotts, that potentially or actually damage business — laws similar to those already used against unions. Morrison’s threat signals a crackdown on the right to protest, prompted by the need to safeguard profits from coal and natural gas, Australia’s two major exports.

Corporate-serving governments across the world understand the potential power of environmentalists, unions and First Nations linking arms. The prospect, which must trigger flashbacks to the youthful 1960s movements, terrifies them.

We also need to remember the 1960s — what made the anti-war, women’s, Civil Rights, American Indian and Gay Liberation movements so mighty and inspirational but also how the State was able to rein them in. The fatal flaw was their failure to go beyond militancy to insurrection. Many leaders not killed by the government were bought off with careers and funds. We’re still suffering the consequences.

However, this demand is: Nationalise energy under workers’, indigenous and community control. It gets to the source of the problem, the profit system. And it’s about uprooting the system by removing energy production and distribution from private hands and placing this under the control of working and First Nations peoples. It is a transitional demand — a pathway to revolution to replace capitalism with workers’ control.

Also, civil disobedience alone, as advocated by Extinction Rebellion, is not a strategy for building a movement capable of rocking the system.

Our most powerful weapon right now is a united front led by the working class, and based on organisations democratically working together around agreed principles and unity in action. This solid unity for environmental justice needs to be international. Given that capitalism operates globally, it must be destroyed globally. An international united front could transition into a vanguard leadership for ecosocialist revolution, the ultimate solution — creating a new society where decisions about energy production and transport are based on science; an international planned economy puts the workers of today’s coalmines, oil refineries and forestry industry to work in developing alternative energy systems; and democratic decision-making places the world’s majority in charge of resolving key social and environmental challenges. The unionists, First Nations peoples and environmentalists who today march in global resistance are showing that such a united front is possible.

Capitalism is killing the planet. The young people fighting for their future know this. “There’s no Planet B,” say the placards. But there is a bright and creative solution, and from these environmental warriors an ecosocialist revolutionary vanguard will emerge.