CPSU organising and industrial action: Government is taking notice, but the battle far from over 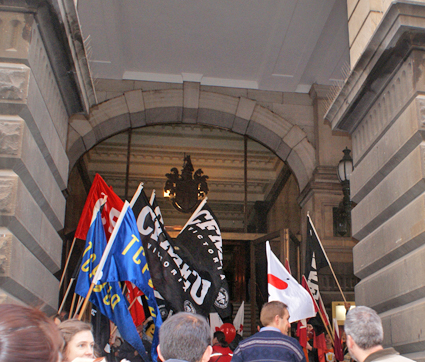 Contingents from a host of unions turned out to cheer CPSU members who stopped work on 25 June.

It is an exciting time to be a unionist in the Australian Public Service (APS) with lots happening on the enterprise bargaining front. In June, the first cross agency stopwork meetings in many years took place, bringing unionists together from right across the public service. Huge meetings were held in all capital cities.

On 25 June it was Melbourne’s turn. The mood was electric. More than 3,000 members of the Community and Public Sector Union (CPSU) from many agencies filled Melbourne Town Hall to capacity. Workers from Department of Human Services (DHS), the Department of Immigration and Border Protection (DIBP), Australian Taxation Office and other large agencies mingled with white-coated scientists from CSIRO. As unionists entered the meeting, they were greeted by a Trades Hall guard-of-honour with lively chants including, “When public services are under attack, what do we do? Stand up, fight back!” An array of union flags fluttered as the union movement showed its solidarity. Jubilant CPSU members welcomed speakers to the stage with tumultuous applause. Scenes like this had not happened in Melbourne since 1997. In that period, the last conservative government, led by John Howard, inflicted rightwing ideological mayhem on the APS and Australian workers more generally. It was bad then. But the situation now is even worse. CPSU members know it and they are fighting back!

Laying the groundwork for action. Under the Fair Work Act, union members can take protected industrial action during a bargaining period after they’ve won a ballot, which can be taken once an agreement has expired but no new agreement reached. Unionists vote on actions, from strikes to bans and other workplace activities. If a majority vote in favour, the action is approved by Fair Work Australia — itself also an APS agency. Having won a ballot, the employer cannot retaliate against unionists taking action. Although only union members can take protected action, agreements are ultimately decided by all staff votes on an offer made by the employer. This makes union density a critically important question.

In late 2014, the CPSU won a protected action ballot in DHS, the largest agency employing more than one-third of public servants. It continued to win ballots in other agencies throughout 2015, and action has been happening for months.

As workers see a union that is fighting back, many who have never belonged to a union before are seeing a reason to join. CPSU membership has taken a dramatic upward turn and is increasing in all agencies.

Government is calling the shots. While the CPSU negotiates with agency heads, senior management in the public service has no real say. It’s become clear to members that the federal Coalition government is leading a rightwing ideological attack on a unionised workforce. For agency heads to put an offer to workers, it must comply with the government’s Bargaining Framework and get approval from the Australian Public Service Commission. The current centralist approach, far from benefiting workers, means even agencies that attempt to put a reasonable offer can’t. The framework is so restrictive, that it mandates substandard pay offers that cut wages in real terms and strip conditions and union rights.

The task of the CPSU is to challenge this bargaining policy. The rights and future of hundreds of thousands of public servants are at stake. The outcome of this fight will also impact millions of workers, as the Commonwealth Public Service is used as a benchmark across the whole economy.

The government failed spectacularly to make progress with ruthless early offers. The first DHS agreement was withdrawn before getting to the required all-staff vote. Staff at the Department of Employment, headed at the time by architect of the bargaining framework, Eric Abetz, embarrassed the Minister with a resounding 95% NO vote. This led to a change in strategy and some movement on pay. Offers were made to smaller agencies, and a tiny number of APS workers have new agreements. In larger agencies, staff continue to reject substandard offers. A recent stunning result saw all staff in DHS — union and non-union members combined — reject a second offer with 83% of staff voting NO. Shortly after, staff in Immigration and Border Protection rejected their offer – the worst seen yet — with an emphatic 91% NO vote.

Public servants have had enough! Since the Howard years, staff in Commonwealth government agencies have endured a slow but steady erosion of conditions. Each year, an “efficiency dividend” is imposed by government — both Coalition and Labor — aiming to balance the budget by requiring public sector workers to do more with less. The severe ideological approach of the employer with the mantra of productivity and efficiency has taken its toll.

Most public service agreements expired more than 15 months ago, and workers have not received a pay rise for longer than that. Many agencies delayed even commencing bargaining for a protracted period while the government’s draconian policy was developed and enforced. Most offers that have been put to a vote have included a substantial increase in working hours, mislabelled a “productivity gain.” These increased hours constitute a 2% or more initial pay cut, even before the small pay offer kicks in. And with a bargaining policy that strips numerous conditions, or places them into unenforceable policy, workers have little reason to vote YES in these circumstances. Meanwhile, the government seems to have no plan but to persist with its attempts to pick off agencies one at a time.

That is why the time is more critical than ever for workers to join CPSU and for members across all agencies to unite and fight to retain their hard-won conditions and to gain pay rises that are fair and provide compensation for inflation as well as the long-term cuts we have experienced.

Seize the day! The opportunity to take cross-agency action was to a large extent made possible by the move of the previous Labor government towards service-wide bargaining, resulting in the timing of Enterprise Bargaining Agreements for many Commonwealth agencies being aligned. The CPSU leadership has a unique opportunity to coordinate action in order to win this campaign. The strategic advantage that comes from the ability to take APS-wide action must not be squandered.

There are missed opportunities that must be corrected. A frenzy of activity took place towards the end of September, but it was piecemeal. Members in DIBP were directed to take rolling action over 10 days, but they were not included in APS-wide action on 24 September. After the positive boost that united mass meetings in June, members taking APS-wide action on 24 September wanted to know why no mass meeting was called. 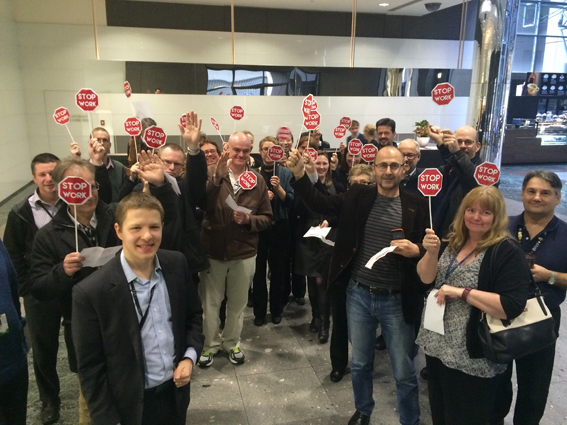 So what is to be done? The way to correct these tactical errors is through increased union democracy. The CPSU leadership needs to understand that industrial democracy must be allowed to work. Action directed from CPSU head office, which garners members’ views only via online surveys, is not the way to go. Surveys are an individual, not a collective, activity. Unionists become more determined and confident through mass meetings, discussion and a democratic vote. Members must be allowed to have a real say in the campaign. This way, progress made will be consolidated and members put in control of the fight.

The Town Hall stopwork meeting in June had a great turnout but experienced members were appalled that no discussion was allowed on the motion.

CPSU members and delegates must continue to increase cross-agency communication. It is coordinated action that will defeat the government’s anti-union agenda.

Community support must also be built and maintained. There’s huge potential to mobilise the public to back public sector workers. This is an element of the current campaign that is being under-utilised. All that’s on offer from the union office is the opportunity to support campaigning in marginal seats aimed at electing a Labor government. This is no answer. Labor governments have for many years shown almost the same level of obstructiveness to public workers’ rights. We are likely to see more of the same even if it transpires that the Abbott, and now Turnbull, administration is a one-termer. While workers want to see the back of a Coalition government, unionists need to take independent action to build a fightback — the ALP’s efficiency dividends cut just as deep as the Coalition’s!

There is no evidence of a more reasonable approach — following the change of leadership of the ruling Coalition government — from arch conservative, Tony Abbott, to the supposedly more “moderate” Malcolm Turnbull. With Turnbull committed to “freedom, the individual and the market,” his government needs to become acquainted with what happens when individuals exercise their freedom to band together and take collective union action. If the business of government slows to a crawl, phones in government call centres go unanswered, tax revenues are uncollected and chaos continues at the country’s airports, then the government may finally start talking to the union.

Real progress is being made across the APS in terms of union consciousness and the fight for workers’ rights. Members have rediscovered the power of collective action. A service-wide momentum is building and has the potential to achieve results. For many new and even long-term members and delegates, this has been their first experience of industrial action. For those with long memories, it is the first since the late 1990s.

With regular action taking place and the government remaining intransigent, it looks like we are in for a long campaign. But with increased union democracy, making good strategic use of the opportunity to take APS-wide action and by turning to the working class community that uses the services we provide, we have every opportunity to win. And, we can’t afford not to.

Denis Mann is a CPSU workplace delegate who remembers the mass struggle against Howard in the 1990s.