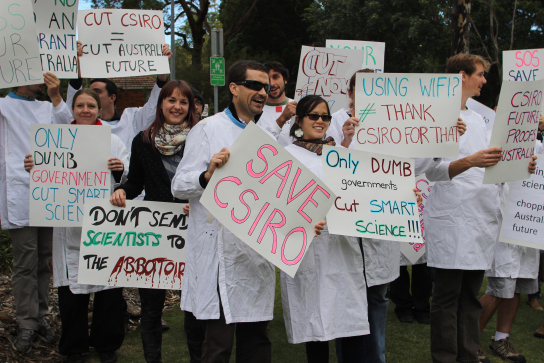 Queensland CPSU members protest cuts to CSIRO. The fight is the same in each agency, so a unified fightback is required.

On 30 June, agreements governing pay and conditions in 117 federal agencies and departments, employing 160,000 workers, expired. The Community and Public Sector Union (CPSU) has been ready to start negotiations for new agreements since last year when members voted to finalise bargaining claims. A key priority in the union’s claims is job security through no forced redundancies—a crucial issue, given the government’s aim to cut 16,500 public service jobs. The union also wants existing leave entitlements retained with no increase in working hours. It wants the rights of delegates to organise in the workplace protected and is claiming a 4% annual pay increase over the next three years.

The Abbott government, with its vicious anti-worker agenda, stalled for months before finally releasing its bargaining framework in mid-February. The union described the document as a “highly-aggressive policy to cut real wages, conditions and rights.”

The union must negotiate with the departmental management in each agency. However, management is required to keep within the government’s bargaining framework.

Department heads can offer wage increases up to a maximum of only 2.5%—a cut in real wages when factoring in inflation. And wage rises will only be allowed if workers accept reduced conditions. This includes longer working hours, cuts to leave entitlements and slowing workers’ ability to move up the pay scale.

The government also aims to frustrate the ability of union representatives to have a presence in the workplace. Bosses in the Department of Foreign Affairs are preventing union delegates from approaching workers while at work. In Immigration, management held information sessions about bargaining but denied the CPSU the right to speak.

Many agencies, such as Customs, had not even commenced bargaining when existing agreements reached expiry dates. Agencies that have begun are bargaining hard. The Department of Agriculture wants to “increase employee availability” by scrapping categories of leave, including some bereavement leave. The Department of Human Services (DHS)—the largest agency—wants to increase working hours. Their plan would deliver $104 million in additional working hours, the equivalent of a 1.36% pay cut for workers. DHS wants to reduce personal leave from 18 to 15 days per year and require workers to perform higher duties without any extra pay for several weeks.

The CPSU Executive Committee urges members to convince workmates who are not union members to join and correctly argues that simply voting NO to management offers will not be enough to protect jobs, conditions, the right to organise or achieve pay increases in real terms. But the national officials are not preparing members for what is needed to win—a sustained fightback across the public service, directed against the government with the goal of killing the restrictive bargaining framework. At the centre of the campaign must be coordinated industrial action across all agencies, coupled with grassroots organising to mobilise community support for public sector workers.

The time to prepare for this is now! The CPSU Executive Committee must convene democratic cross-agency delegates’ meetings to share information, strategise and coordinate the timing of strike ballots. The Abbott government aspires to be a model for all employers. It is serious in its goal of driving down pay and conditions and undermining job security across the public service. The only thing that stands in their way is unionised public servants. Now is not the time for business as usual!

Are you a CPSU member interested in making this vision a reality? Get in touch with other CPSU members who are organising via the Freedom Socialist Organiser.