LGBTI people still have a world to win! 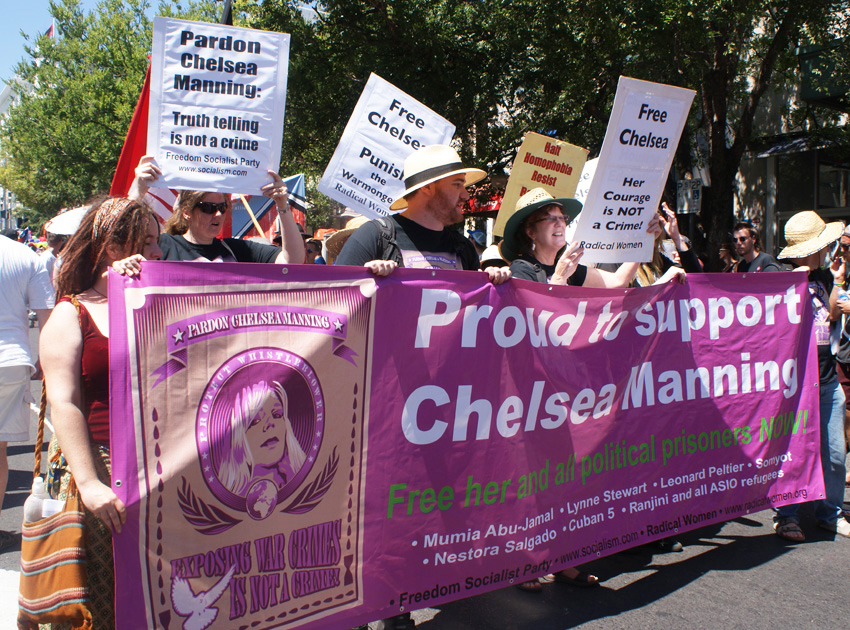 The Freedom Socialist Party and Radical Women teamed up to organise a Free Chelsea Manning contingent in the Melbourne Pride March in February. Support the fight for Manning’s freedom. Her support movement is organising a letter campaign for a reduced sentence and a presidential pardon. To help, visit www.bradleymanning.org

Things have changed for lesbian, gay, bisexual, transgender and intersex (LGBTI) people in Australia since the gay liberation movement blasted onto the scene at the end of the ‘60s. Collective organising has won reforms, and the increased visibility of LGBTI people has made the closet a thing of the past for many queers. But despite these gains, LGBTI oppression remains all too real and, when combined with other forms of oppression such as racism, sexism, abelism, ageism and class exploitation, life can be very tough.

The Freedom Socialist Party is a Trotskyist, socialist feminist party. We are Marxists and Leninists. We have a long, proud history as fighters for LGBTI rights, dating back to our formation in the United States in1966.

These demands sum up what we think LGBTI people need today in order to achieve liberation. They use the transitional method adopted by Russian revolutionary leader, Leon Trotsky. Transitional demands are ones that connect and make sense in the here-and-now. But they are transitional because they are things that the capitalist system—which rests on the foundations of sexism, racism, homophobia and transphobia—cannot deliver. They are demands that encapsulate the vision of complete emancipation embraced by early gay liberation.

We also acknowledge that language evolves as those who refuse to conform to compulsory heterosexuality and a rigid gender binary share their experiences and define their varied identities. We use the inclusive 21st century terminology of lesbian, gay, bisexual, transgender and intersex people, abbreviated to LGBTI, to highlight that while oppression presents in many ways, the source is common and necessitates unified resistance.

End the social, political, moral, legal and economic discrimination against lesbian, gay, bisexual, trans and intersex people. Enact comprehensive legislation—with no exemptions for private schools and religious institutions—to outlaw discrimination. Full recognition of all forms of domestic partnership. Equal access to carers leave and other forms of entitlements for workers, regardless of the status of their relationship.

End all discrimination in the law; equal legal recognition for all forms of consenting relationships. For the right of adults of all sex/genders—including intersex—to marry or not and to marry whomever they choose. For an end to unequal age of consent laws.

End enforced economic dependence on parents and partners. For an independent living wage for youth, students, unemployed workers, the sick, disabled and seniors.

Control of our bodies, control of our lives. Free gender reassignment surgery and hormones for all who choose it (and for intersex only with fully informed consent after age 16), and remove surgery as a requirement to alter sex on birth certificates. End the practice of surgical intervention performed on intersex infants, children and adolescents. Equal access to all reproductive technologies; free, safe abortion on demand. For the rights of single parents and lesbian, gay, bi, trans and intersex parents to raise their children and to be adoptive and foster parents.

For an end to racism that also hurts LGBTI people. Provide adequate funding for community development initiatives that empower LGBTI people from every ethnic background who choose to organise. Listen to and provide adequate resources for Aboriginal same-sex attracted people, sistergirls, brotherboys to empower themselves plus improve health and wellbeing in their communities. Open the borders; the right to flee persecution, including that based on homophobia, transphobia or sexism. End mandatory detention, including the incarceration of asylum seekers on Manus Island and Nauru.

Free, quality physical and mental healthcare. The right to access respectful and adequate care without the pressure to conform to traditional gender roles and heteronormativity. Ongoing funding for community-led organisations to provide mandatory education for all types of professionals about the provision of LGBTI sensitive care as a requirement of qualification. Provide full funding for the research, treatment, cure and prevention of HIV/AIDS and sexually transmitted diseases. Nationalise pharmaceutical companies and make state-of-the-art medications available to all who would benefit, for free. Legalise all drugs under community control to remove the profit motive—treat addiction as a health issue, not a crime. For the right to make informed decisions about healthcare, including the choice of legal guardian.

Fully fund lifelong community-led education. For a system that teaches people how to think, not what to think. For a curriculum, free from stereotypes, that values diversity and teaches about the true history of all exploited and oppressed, including LGBTI, people. Provide non-judgemental sex education in all schools. End the pernicious culture of bullying and harassment in schools.

End homelessness: housing is a right for all. Build housing to suit varied domestic arrangements. Fund refuges for young LGBTI people. Legal recognition of young people’s right to enter or leave a family or collective household. For the right of people to reside with domestic partners of choice in residential aged care facilities.

End degradation in prison. For the right of LGBTI prisoners to have unmonitored and unlimited visits from friends, family and parents, regardless of sexual orientation, sex/gender identity or marital status. End sexual harassment against prisoners, particularly LGBTI prisoners. Eliminate the practice of strip searches. Prisoners must be housed in a facility that matches their gender identity, regardless of physical anatomy or sex, and have access to hormone therapy and transitional surgery if desired.

Stop defining as deviant those who do not conform to stereotypical ideas of physical anatomy, sexuality and gender expression. For an end to enforced sexual and gender binaries. For media and the arts that reflect the full diversity of human experience and lifestyles, including within children’s programming. Stamp out sexist, racist, homophobic and transphobic advertising.

If you are interested in the ideas we’re raising, the Freedom Socialist Party would love to hear from you. Contact us at freedom.socialist.party@ozemail.com.au or call 03-9388-0062.