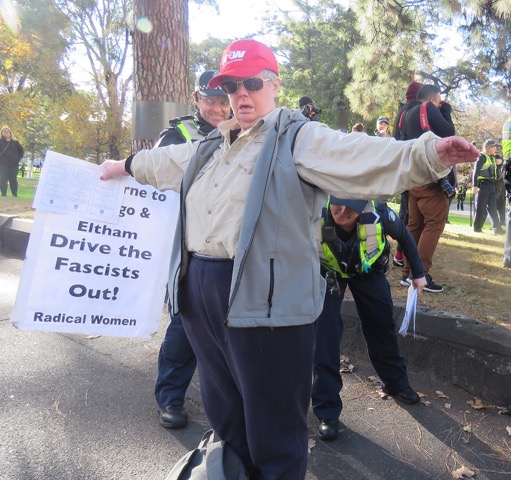 Police stop and search intimidation tactics did not work. Anti-fascists complied when they had to and went back to demonstrating.

On June 25, about 100 “patriots” showed up to march for “Australian Pride.” They were met by a 250-strong “No Pride in Hate” — LGBTIQ, diverse genders, First Nations, multiple ethnicities and races mobilised by Campaign Against Racism and Fascism (CARF) and No Room for Racism. Our side stood out with rainbow flags, placards and banners, hats and jackets displaying different union emblems and loud chanting.

For the fascists, the Australian Pride March was an attempt to bring together their splintered grouplets: two years of constant hammering by CARF’s counter-mobilisations have left them weak and demoralised. On the day, they were despondent that more “patriots” hadn’t turned up. On the anti-fascist side, the expanding solidarity among those targeted by the neo-Nazis was uplifting.

Police protect fascists. We could have stopped the fascists then and there, if not for the hundreds of cops deployed — including riot and mounted police — to facilitate the fascist march. Victoria Police designated most of Melbourne as a stop-and-search zone to use its sweeping powers against the anti-fascists. They kept us at a distance to let the fascists march one block to Parliament House. When some from our side broke through the police lines and arrived before the fascists, police forcibly removed them. The police then isolated and surrounded us. They repeatedly pepper sprayed — and threatened to arrest people helping the victims, who were badly affected.

Unintimidated, we drowned out the fascists, who had dwindled to 30, and forced them to retreat back the way they came, under police escort. We then marched through the city’s streets.

The police role was decisive. Fascists were able to rally at Parliament House. After the rally, a group of fascists marched through parts of Melbourne. The anti-fascist united front needs to grow and prepare for neo-Nazis operating under State protection.

Today’s stormtroopers. Neo-Nazis are coming out in the open about their multi-issue agenda. Until now, Islamophobia has been their chief recruiting card, using Muslims as the scapegoat for the growing insecurity of people hurt by decades of neoliberalism. In promoting the June 25 action, they disclosed other targets: LGBTIQ, especially trans folk, the African community, immigrants and refugees, and the Left.

To promote their march on June 25, the fascists deliberately misappropriated Pride, the annual international LGBTIQ celebration in June. “Gender-bending indoctrination” of our children, they said, is destroying our society. They singled out the highly successful anti-bullying Safe Schools program, a lifeline for trans and other LGBTIQ kids, to throw on their Nazi bonfire.

Enforcement of strict binary roles go hand in hand with a gender hierarchy (i.e. male supremacy). If the closet is a prison for LGBTIQ folks, the domesticated home is a hellhole for women. If they could, the fascists would up-end 50 years of progress by the women’s and queer liberation movements.

Problems caused by immigration are many, according to these Aussie Pride goose-steppers. It’s responsible for everything from rising unemployment and house prices to our clogged roads and public health system. Not only that, any retreat on Australia’s infamously brutal refugee policy would “return people smuggler boats to our shores and further threaten our national security.”

The neo-Nazis are also going after the African community — exploiting police-fuelled propaganda about “African crime gangs,” which the mainstream media then pumps out ad nauseum.

But it’s the Left that fascists hold ultimately responsible. “Political correctness,” they claim, is destabilising Australia’s “morals and values.” Truth is, neo-Nazis hate the Left’s unrelenting counter-organising. In November, when CARF trounced a fascist rally celebrating Trump’s election, the Australian Alternative Right posted on Facebook: “The ‘far left’ protest cult are loud, they’re out there in big numbers every week, demanding their voice be heard…” This is what the Hitlerites tried to turn around on June 25. 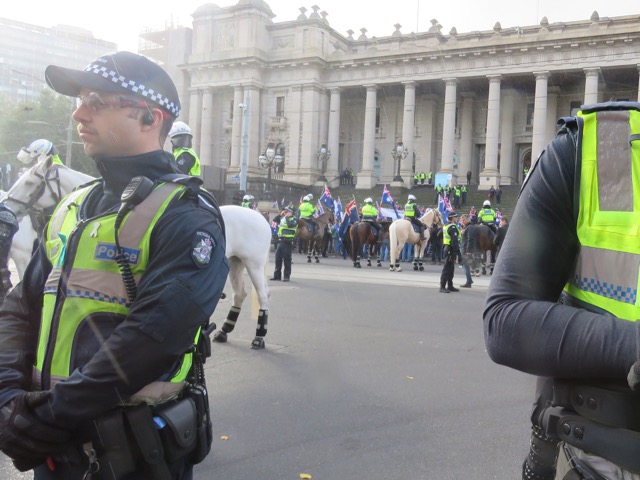 Victoria Police rolled out the red carpet to assist the small group of Nazis to rally at
Parliament.

Not operating in a vacuum. Parts of the neo-Nazi world are connected with people in respectable places. Leaders of the Party for Freedom (PFF) and United Patriots Front (UPF), for example, have been photographed with Senator and One Nation leader Pauline Hanson. The PFF, UPF and True Blue Crew have promoted her meetings and publicly aligned with her electoral campaign. The UPF offered to be her bodyguard.

Behind these assaults is nationalism: those who subvert “Australian morals and values” are enemies of the nation. This reasoning is not confined to far-right and fascist ideologues. Arguing the Coalition’s push for an even harder citizenship test, Prime Minister Turnbull announced that new citizens should be “patriots, committed to the values that define us.” UPF führer, Blair Cottrell, couldn’t have put it better. And not a day passes without “terrorism” jumping from the news reports and commentary.

White Australia ideology and the lie that no society existed in Australia before European “settlement” still thrive in Parliament. So do the Islamophobic, xenophobic, homophobic, sexist, anti-poor, anti-worker politics of those serving big capital.

Nationalism: rescue remedy for the status quo. The deepening global economic crisis is spreading misery and desperation for most people. The basics for survival — welfare, public education and healthcare, jobs and working conditions — are being gutted. Life for workers (employed or not), the self-employed and people running small businesses becomes more precarious by the day. People are demanding solutions.

Protests are more frequent. And they’re getting bigger — such as Melbourne’s 60,000-strong First Nations-led Invasion Day march on January 26 this year, which overwhelmed the annual Australia Day parade and stopped city traffic for hours. Protests are also becoming more internationally connected, such as the huge Women’s Marches in solidarity with those in the U.S. protesting Trump’s inauguration. Melbourne’s recent demonstration of 30,000 construction unionists against cuts to penalty rates and the anti-union Australian Building and Construction Commission showed how powerful the movement could be if all unions came out. 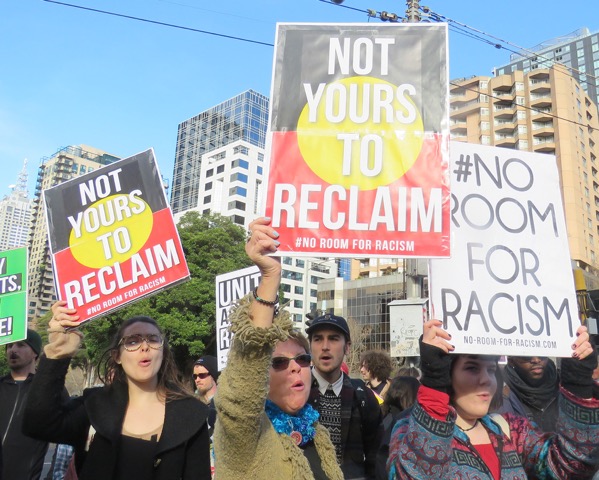 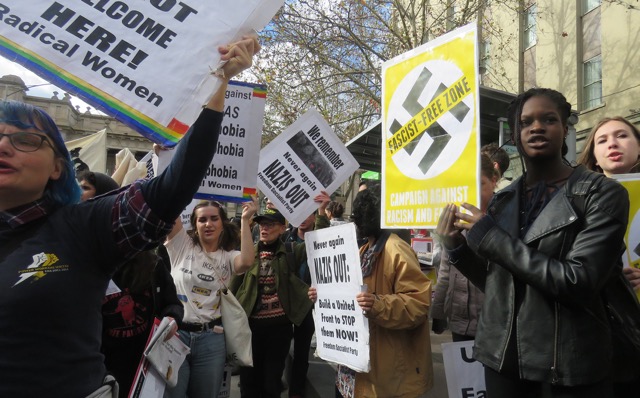 Those countering the Nazis in Melbourne on 25 June were diverse, passionate, determined and disciplined.

This scares the capitalists. Bourgeois politicians’ answer is nationalism. “Grow the economy” for Australians (read: stabilise profit for the 1%), said Turnbull when he spruiked the May Budget. The budget actually took away from those at the bottom while giving tax cuts to the rich. Law-and-order measures, such as Victoria’s criminalisation of face coverings at demonstrations, are for “Australians’ protection.” The intended meaning is that Left “extremists” and “criminal African gangs” are a threat to the community. And problems such as unaffordable housing are blamed on foreigners, specifically Chinese. Scapegoating doesn’t come from Hanson alone. It comes from Turnbull’s Liberal Party and Bill Shorten’s Labor Party, and it’s embedded in the mainstream media narrative.

Turnbull, Shorten, Hanson et al are working hard to deflect mounting anger in the working and middle classes away from the system by setting up straw enemies. Nationalism bonds workers to their bosses, while scapegoating breaks class solidarity. Through divide-and-control, these parliamentary representatives of capital help the fascists and embolden them. But this does not make them fascist — not unless they set about building a movement that sets out to crush the working class. This is fascism.

Fascism is based in the middle class, which has no power of its own. At the critical point of class conflict, if the working class is divided and vulnerable, this class in the middle will side with capital against workers. The capitalist class then goes about brutally destroying unions and the Left, thus destroying workers’ capacity to organise. Fascism is capitalism’s last resort to save itself.

CARF is a united front of socialists, anarchists, Aboriginal justice activists, feminists and unionists, based on agreed Points of Unity. Freedom Socialist Party and Radical Women helped found CARF more than two years ago, when socialists, anarchists and community activists came together to counter-organise against Reclaim Australia, then an emerging far-right movement.

The June 25 counter-action brought in new people, and CARF can build beyond a predominantly left front. The day’s events showed how necessary this is. Everyone in the fascists’ sights — especially unions — should join and strengthen this crucial united front for the fight ahead. If you want to work with FSP and RW to do this, contact us!

Debbie represents Radical Women in CARF and is a community member of the National Union of Workers. 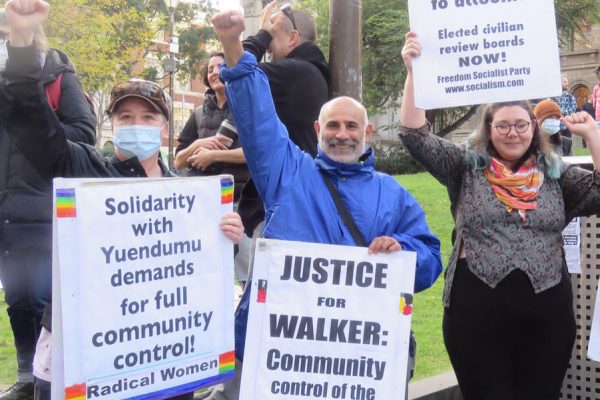