Public sector workers prepare for a fight back in 2015 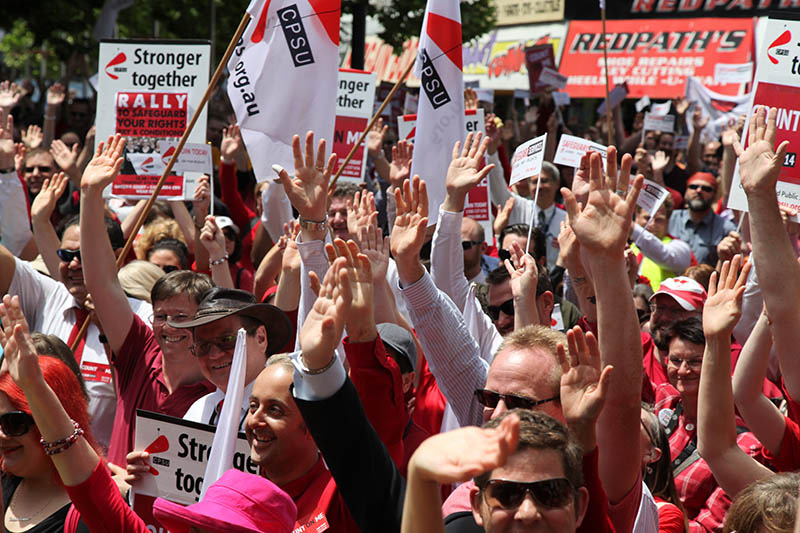 Thousands of CPSU members from across all agencies turned out in Canberra last November to rally against the Abbott government’s attacks on the public service.

Last year was a tough one for both public sector workers and the community that relies on the crucial services these workers provide. While media commentary remains focused on specific budget measures that have not yet passed the Senate, the main budget bills sailed through both houses of Parliament.

As a result, the jobs massacre continues in the public sector. In 2014, 8,000 jobs went. The government aims to slash a further 8,700 by June. There have been big cuts at the Australian Tax Office, the Australian Broadcasting Commission and the Commonwealth Scientific and Industrial Research Organisation. Cuts to 700 jobs at the Department of Agriculture, which is responsible for quarantine, have potentially disastrous implications: a fire ant outbreak in Sydney last December is posing a serious threat to the environment.

There’s also a battle looming over pay and conditions. The Community and Public Sector Union (CPSU) served its bargaining claim on employers in late 2013, well ahead of the June 2014 expiry of existing enterprise agreements. But by the end of 2014, not a single federal agency had a new agreement in place. The CPSU states openly that it is unlikely the union will be able to achieve an agreed outcome at the negotiating table.

The obstacle is the government’s restrictive bargaining framework, which requires agency heads to strip conditions from agreements and make pay offers which are, in effect, pay cuts. No offer can be put to staff without it first being approved by the Australian Public Service Commission, and the only mechanism allowed to fund a pay rise is to trade off hard-won conditions.

Rumblings in the ranks. The CPSU has more than 55,000 members and rising. Intensive campaigning in workplaces across the country is magnetic: unions that led a collective fightback are those workers want to join.

The CPSU has already won Protected Action Ballots (PAB) in two agencies. These votes authorise industrial action while preventing the employer from retaliating against individuals.

The first agency to win its PAB was the mega Department of Human Services (DHS), which includes Centrelink, Medicare and Child Support Agency workers. DHS employs more than a third of all public servants, making the ballot the largest ever run by Fair Work Australia. Union members cast a 95% vote in favour of nine action proposals authorising bans and strike action. Next up was the smaller Department of Veterans Affairs (DVA), which returned a 96% “yes” vote for industrial action.

Management at the Department of Employment was the first to gain approval to put an offer to an all-staff vote. The deal would deliver a pay outcome of 1.4% over three years in return for increased working hours, reduced leave entitlements, removing the requirement to consult about changes and a host of other nasties. Staff — both union and non-union — gave this the thumbs down, with 95% voting to reject the offer. The Minister for Employment, Eric Abetz, is the architect of the Bargaining Policy, but he could not sell it to staff in his own department. This is a further indication of the increasingly defiant mood in the sector. The wage offer was “trounced” by this vote, as The Canberra Times put it.

Use it or lose it! Under the PAB rules, workers who win a ballot have 28 days to enliven it by taking action. Once enlivened, the PAB remains in force until a new agreement is reached.

Union members in DHS took protected action on 11 December, using four of the nine measures they’d approved. Those in client contact areas stopped wearing corporate uniform. Back-office workers set their emails to the “Out of Office” message, so that everyone who made contact received a union-authorised message about the dispute. An important part of DHS is its Smart Centres, where staff assist customers by phone. The management of these centres relies heavily on workers entering special codes into the system to indicate what duties they are performing. This activity was banned for the day. These workers also read an authorised CPSU message to every customer.

Workers in DVA also started four days of action on 11 December, using different tactics each day. Those with client contact roles read union statements at the end of their transactions with veterans, war widows and their families.

These initial actions, which involve engaging with clients who rely on public services, have immense power to mobilise the massive community support that will be an important ingredient in winning the campaign. While government scare-mongering suggested payments to those on welfare might be at risk ahead of Christmas, the CPSU countered that it was making no such threat. By making the public aware of what’s at stake, workers can also neutralise the government spin that public servants are well-heeled bureaucrats.

Common cause. Public sector workers and the communities they serve have shared interests. This was again highlighted just days after the first protected action, when the Treasurer announced the Mid Year Economic and Fiscal Outlook (MYEFO). This is an annual review of how the budget is tracking. MYEFO 2014 included scrapping 138 statutory bodies, resulting in even more service cuts and job losses. Bodies to be abolished included the Privacy Advisory Committee, the National Disaster Recovery Task Force, the Lesbian, Gay Bisexual, Transgender and Intersex working group, First People’s Education Advisory Group, National Indigenous Drug and Alcohol Committee, the Healthy Life, Better Ageing Committee, the Dementia Advisory Group and the National People with Disabilities and Carers Council.

In the Veterans Affairs portfolio alone, 21 bodies were scrapped or merged, including Vietnam Veterans’ Education Centre Advisory Panel and a medicines and therapeutic advice group for veterans. The Vietnam Veterans Association spoke out, labelling the cuts “crass stupidity.” When DVA workers communicate union messages to clients, important connections can be made and solidarity cemented.

Also unveiled as part of MYEFO was a new “Contestability Framework” designed to make it easier to outsource and privatise government programs. The government claims that services can be offered more cost-effectively through outsourcing. However, outsourcing requires that contractors’ profits be added to the equation. Thus, outsourced services can only be delivered more cheaply by reducing the quality of services or exploiting workers more intensively, or a combination of both.

A useful model is provided by the long industrial battle by Victorian paramedics, who won an agreement in December that delivered a 6% pay increase from 1 January, a further 3% from 1 July and another 3% next year. Taking union action and running a highly visible campaign to educate the public and mobilise massive community support proved an effective combination for this group of public sector workers.

Time to turn up the dial. The strong message sent by those public servants who have voted so decisively in favour of action or against sub-standard management offers, is an excellent foundation for the CPSU to build on.

Bargaining is currently going nowhere in all the other agencies because, as long as the current Bargaining Framework remains in place, it is simply not possible for agency heads to get approval for any agreement that is going to be acceptable to CPSU members.

The message is loud and clear. Simply voting “no” to bad offers will not be enough to produce new offers that workers can support. Unionists in other agencies must follow the lead of workers in DHS and DVA. In every agency, the message should be the same: the Bargaining Framework has to go, and workers will not sell off conditions or accept wage offers that do not keep up with the cost of living.

Simultaneous actions across the public service, supported by a mobilised community, can win. It can also send a message that workers and the community will not tolerate dismantling the public sector. Keep informed of when and where CPSU members take action, and support them. We all have a stake in this fight.

Alison Thorne is a CPSU workplace delegate. You can contact her at alison.thorne@ozemail.com.au