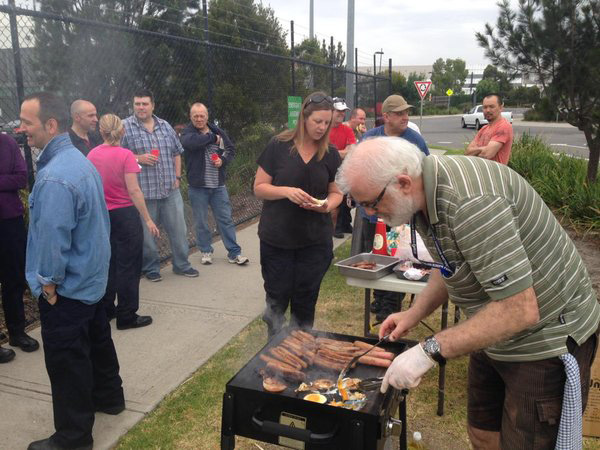 Stood down for applying bans! CPSU members at Melbourne Mail enjoy a BBQ.

Happy New Year to the 160,000 public servants — most who’ve not had a pay rise for two-and-a-half years! Public sector workers and their union, the Community and Public Sector Union (CPSU), are locked in battle with the federal government, which wants to strip conditions, put other conditions into unenforceable policy, remove union rights and cut jobs. In return are pay offers that do not keep pace with living costs, let alone compensate for the delay.

The government’s workforce is employed across many agencies. Under enterprise bargaining, each agency has to reach agreement on wages and conditions with its own staff. But the catch is that managers are not really free to negotiate, instead being constrained by a bargaining framework imposed by the government.

Unionists hoped Tony Abbott’s demise might ease the rules. Eric Abetz was replaced by Michaelia Cash as the Minister responsible for public service bargaining. Abetz, a Christian conservative, is well known as a warrior for the Liberal Party right. Cash, who insists she is not a feminist, has a career background as an industrial lawyer for Freehills — a company specialising in representing employers.

Cash continues where Abetz left off. She told Parliament, “In the real world…you do not actually get a pay rise if you do not give a productivity gain.” The problem is that the continuous improvements delivered by the public service don’t count! The only “productivity” the government will accept is trading off working conditions.

Public servants are demonised as “mandarins” and “bureaucrats” and the service described as “bloated” and “inefficient.” But the CPSU is not bargaining for agency heads, but for workers who deliver frontline services and get paid average weekly earnings or less.

The service has also faced decades of job cuts and outsourcing. The decline in the ratio of public servants per capita has been so steep that simply returning to 1991 ratios would require 50,000 new hires!

Battle lines drawn. In most agencies unionists have voted for action in ballots giving them the legal right under the Fair Work Act to impose bans and to strike. And strike they have! More than 60% have voted on management offers, with all but a handful of agreements in small agencies being voted down. As the holidays approached, 20 agencies tried to ram through poor offers. A resounding 85% of workers at the Australian Tax Office – the third largest department – rejected management’s offer. Staff at the Australian Bureau of Statistics, Australian Institute of Family Studies and the National Disability Insurance Agency all gave bad agreements the thumbs down in all-staff votes.

Workers at IP Australia — the government’s intellectual property regulator – were the first agency to reject a second bad offer from management. They voted by a margin of 73% against an initial draft containing a 1.5% pay offer. When the offer was increased to 2%, 70% still voted “no.” The Department of Agriculture and Water Resources voted down a bad second offer shortly after. These votes confirm that the removal of conditions from agreements is a sticking point. With fewer workers to do the job, enforceable protections are crucial! Conditions guaranteeing flexibility are vital to those with caring responsibilities — predominantly women.

In an act of rank hypocrisy, politicians are about to pocket a 2% pay rise with no trade-offs. And this, just three years after getting a 37.7% pay increase! No wonder CPSU members are angry and determined not to lose conditions that have been won over a generation. Older workers remember what it took to win these conditions and are passionate about not bequeathing lesser conditions to the next generation of public servants.

Vindictive tactics fail. Some managers privately bemoan the bargaining framework. Not so at the Department of Immigration and Border Protection, where management escalated the dispute in response to the CPSU’s notification of bans approved by Fair Work Australia. Management issued “no work, no pay notices,” advising unionists at ports, mail centres and freight operations that if they did not perform 100% of their duties they would be docked their entire pay for the shift. Union members refused to be intimidated — more than 500 were stood down by management for refusing to comply with notices. 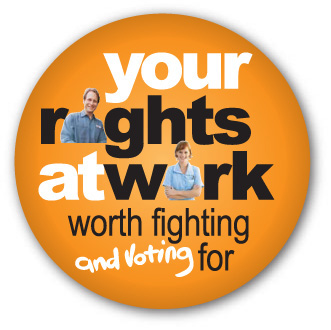 Learn from history! The potential of the Your Rights At Work Campaign was squandered when the ACTU leadership put its faith in parliament and demobilised independent union action.

The CPSU was swamped with calls from members wanting to support those on the front line of the battle. It launched a public Campaign Fund to “provide financial support for union members who lose pay through sustained strike action or being stood down without pay.” The fund received $10,000 in donations on the very day it opened. Donations, including funds raised by the Freedom Socialist Party, have continued to flow. To donate go to the CPSU website.

Welcome but tardy. The establishment of this fund is long overdue. Faced with an intransigent government and a rigid bargaining framework, acceptable offers were unthinkable without a sustained fight. The fund should have been launched when the first Protected Action Ballot took place. It should have been called a Strike Fund and publicised to signal to the government that union members mean business.

The headline on the 30 November 2015 news release was, “union launches campaign fund to support Commonwealth strike action.” CPSU National Secretary Nadine Flood described the fund as an “innovation,” noting that “crowd funding strike pay by union members and the public is a fairly unusual idea for Australian unions.”

The idea of a permanent reserve to fund strike action is common in unions overseas. This increases the bargaining power, because employers know that the union is prepared and ready to strike.

The CPSU fund, while primarily established to sustain those doing it tough as a result of the battle, might also be used for the union’s ongoing campaign for jobs, rights and services. This includes paid advertising, online campaigning, research, polling and other campaign.

The CPSU is an affiliate of the Australian Council of Trade Unions (ACTU). At the 2015 Congress, unions agreed to contribute a $2-per-member levy to “transform the ACTU into a permanent campaigning organisation.” But permanently campaigning for what?

There’s nothing fresh about the ACTU plan — a campaign focussed on marginal electorates in the upcoming 2016 federal election. The CPSU Safeguard campaign feeds into this “strategy.” While the union will take care not to explicitly say, “Vote for the Australian Labor Party (ALP),” the subliminal message is that solutions are to be found at the ballot box. Trade unionists are angry about being made to shoulder the burden as capitalism continues to slide, yet union leaders continue to direct the anger into “safe” — but ineffective — channels.

Public servants, who suffer job cuts, outsourcing and “efficiency dividends” — no matter which political party is managing capitalism — should know better than most that the union movement needs to take independent political action. Any money remaining in the Campaign Fund, once this battle has been won, should be retained as a reserve fund and publicly built up for next big struggle. We should also boost this strike fund by redirecting affiliation fees currently paid to the ALP.

The Campaign Fund is being managed well by CPSU workers — processing claims from union members who have lost significant pay, fighting not only for their own working conditions but for all workers. The public service struggle sets the benchmark for other workplaces, magnifying the importance of achieving victory. The great 2014 – 2016 CPSU bargaining battle is one that the union movement cannot afford to lose!

Alison is a CPSU workplace delegate who took stopwork action seven times in 2015. To work with CPSU members who believe there is an alternative to the bland bipartisanship that’s dished up, contact her at alison.thorne@ozemail.com.au