Helen Keller overcame extraordinary adversity to defy what it meant to be disabled a century ago. She became a socialist and feminist, championing the rights of workers and disabled people the world over.

Keller is one of the most recognisable figures in modern American history. The well known image of Keller is of a young girl who, sitting beneath a water pump, learnt how to speak and communicate thanks to her teacher, Anne Sullivan. Keller’s life was championed as a success story for disabled people — one that symbolised the 20th century American dream. But in truth, Helen Keller was extraordinary, and not for the reasons conservative commentators and historians would have you believe — she was a rebel who advocated overthrowing the capitalist system and replacing it with socialism. 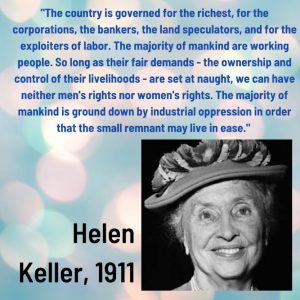 A sanitised legacy. Helen Adams Keller was born on June 27, 1880 to an affluent Southern family from Tuscumbia, Alabama. Her father was a veteran in the Confederate Army and her mother came from a line of prominent New England families. Both were part of the slaveholding elite prior to the war. By the time Keller was born, the family’s fortunes were waning. At just 19 months of age, Keller contracted an unknown illness which contemporary doctors say is likely to have been meningitis. The infection left Keller both blind and deaf.

When Keller was seven, she became a pupil of Anne Sullivan, a blind school teacher and trailblazer in her own right. Sullivan became Keller’s friend and lifelong companion. She taught Keller how to “finger-spell.” Sullivan learnt this technique during her time at Perkins School for the Blind, earning her the nickname “the miracle worker.” Once Keller mastered this ability, the technique enabled her to communicate with others using a combination of both writing and numerical systems with her hands.

This part of Keller’s life story, which is well known, tends to get abruptly cut short. It is condensed to a young woman who became physically disabled at a staggeringly young age and miraculously learned to communicate with the able-bodied world. The end.

To this day, she is held up to be the inspirational standard for disabled people — an almost perfect individual and icon, who through sheer tenacity personally overcame her disability to eventually speak and write. To reduce this down to a tale of miracles is fanciful, conservative and untruthful. And it symbolised everything Keller resented by misrepresenting her incredible life as the socialist she was.

Anti-capitalist rebel. The truth is that Helen Keller was a socialist and feminist. She was a fierce and determined fighter for workers’ rights and the rights of the disabled. She fought against war and bigotry her entire life and was extremely aware of the adversity poor people, particularly poor people with disabilities, faced. Keller had a radical analysis of disability, arguing that it was not by mere chance that working class people were more statistically prone to become physically disabled. She attributes this to the overwhelming number of workplace accidents, which plagued industry in the United States at the time. She argued that employers’ grotesque and dangerous obsession with profit underpinned their reluctance to prioritise workplace safety.

In 1908, four years after graduating with a Bachelor of Arts degree from Radcliffe College, Keller joined the American Socialist Party (ASP). She attributes her radicalisation to two factors‚ her extensive reading and her lived experience with disability.

Her love of philosophy and sociology led her to the works of Karl Marx and a range of contemporary American socialists writers and organisers, including Eugene Debs. In Keller’s words, “my investigation of blindness led me into the industrial world” while probing for underpinning causes of disability.

Her most revealing conclusion was that the industrial machine known as capitalism is responsible for poverty, giving the poor limited access to medicine, food, housing and education. The deliberate aim of this system is to keep the bosses’ pockets full. She found that there was a direct correlation between untreated syphilis and blindness. Keller demanded better education about reproductive health for all. She advocated that contraception be made freely available, including for sex workers. She also championed rights for working class women and children at a time when issues such as equal pay and access to education were largely ignored.

Keller opposed racial segregation. She was a donor and outspoken supporter of the National Association for the Advancement of Colored People. Later in life she got behind the nascent civil right movement.

Keller’s commitment to socialism was lifelong. She advocated for the abolition of the capitalist system as essential for the true liberation of every human being on the planet. In 1912, she joined the Industrial Workers of the World, breaking from the Socialist Party, who she felt had neglected the calls for action from the striking immigrant women garment workers in Lawrence, Massachusetts. Keller was frustrated by the increasingly reformist orientation of the Socialist Party. She stated that it was “impossible for the party to keep its revolutionary character so long as it occupies a place under the government and seeks office under it.” Keller was a fierce advocate for revolution. She supported the Russian Revolution, advocating solidarity and urging an end of the capitalist encirclement.

Strike against war. Keller was a passionate opponent of imperialist war. Her involvement in anti-war activism during the First World War provides valuable lessons today, given the ongoing conflict in Ukraine. In a 1916 address to the Women’s Peace Party in New York, Keller delivered a rousing speech titled, Strike Against War. In it, she implored listeners to embrace a class-based analysis against war, arguing that the only enemy workers should be fighting is their bosses.

Keller knew that the war was waged by rival imperialist powers to defend their colonial interests and shore up profits. She declared: “Every modern war has had its root in exploitation. The present war is to decide who shall exploit the Balkans, Turkey, Persia, Egypt, India, China, Africa.” She explained the interests of the U.S. ruling class with great clarity: “Congress is not preparing to defend the people of the United States. It is planning to protect the capital of American speculators and investors in Mexico, South America, China and the Philippine Islands. Incidentally this preparation will benefit the manufacturers of munitions and war machines.”

She maintained her sharp analysis that capitalism fuels war, arguing that when Britain and France declared war on Germany during World War II, the working class had no interest in war for profit.

It is economic crisis that fuels war. We can see this connection today with Russia’s war in resource-rich and strategically located Ukraine. With the Russian economy in crisis, the impulse to conquer new territory becomes necessary to get profits flowing again.

Immense legacy. Like everyone who is not wealthy, Helen Keller had to work. Employed by the American Federation for the Blind in the later decades, Keller spent much of her public life fundraising for the federation, rubbing shoulders with wealthy philanthropists and charming money out of their pockets — playing them for all their money is worth! Keller, in actual fact, despised charity, knowing that to achieve true human liberation for all was through revolutionary socialism. She remained an advocate for the working class and disabled in spite of the condescending, offensive blowback she received at the hands of the mainstream American press. In her 1929 autobiography, Midstream My Later Life, she said: “So long as I confine my activities to social service and the blind, they compliment me extravagantly . . . but when it comes to discussion of a burning social or political issue, especially if I happen to be, as I so often am, on the unpopular side, the tone changes completely.”

Her commitment to a better future did not waiver. She remained motivated by her belief that “our worst foes are ignorance, poverty, and the unconscious cruelty of our commercial society. These are the causes of blindness; these are the enemies which destroy the sight of children and workmen and undermine the health of mankind.”