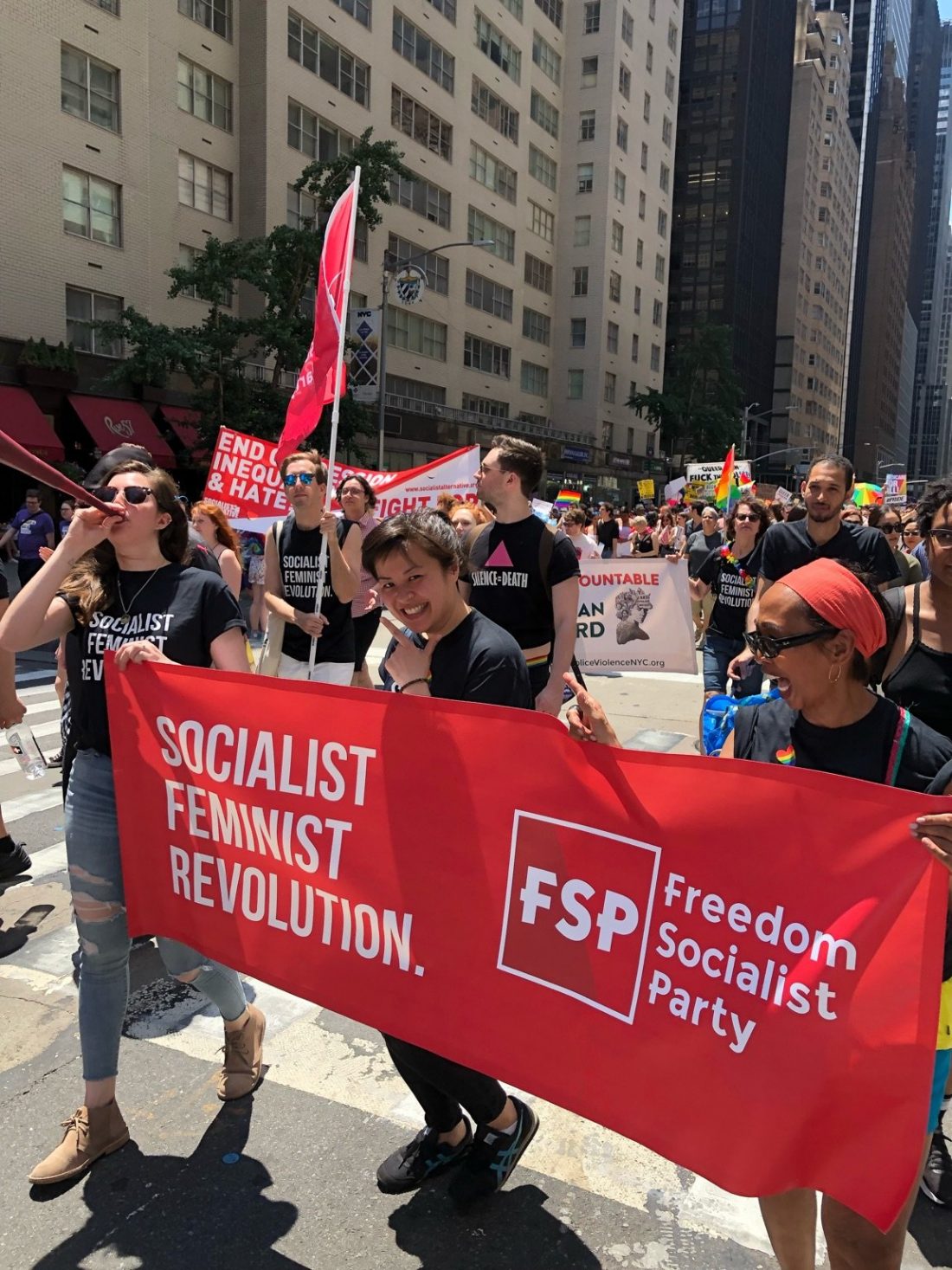 Public Hours:
Monday and Thursday 1:00-6:00pm. Or call for an appointment!

Freedom Hall is available for rent. Reach out for rates and information!


Make a donation to our branch!

How can we get rid of systemic racism? In a study of Revolutionary Integration: A Marxist Analysis of African American Liberation and other readings, areas covered will include the connection between the Civil Rights and labor movements; the need for radical Black leadership and role of women and LGBTQ+ folks; and how to build a multiracial movement powerful enough to win fundamental change.

Register at bit.ly/FSPstudy to receive the reading schedule and zoom link.

Call 212-222-0633 or email NYCFSP@gmail.com for information or to obtain reading materials.

Sponsored by the Freedom Socialist Party

Abortion rights are under unprecedented attack — with vicious rollbacks in many states and the very real possibility that Roe v. Wade could be overturned when the U.S. Supreme Court rules on Dobbs v. Jackson Women’s Health Organization in Mississippi.

Please join Radical Women and other community organizations in building a calendar of coordinated actions for reproductive justice on October 3. That is the date in 1977 when Rosie Jiménez became the first person known to have died of a back-alley abortion after the Hyde Amendment denied federal funds for the procedure. October is also when the U.S. Supreme Court is expected to hear the Mississippi case. A large number of well-publicized actions across the country with a coordinated calendar and theme will show the intensity of public support for every person’s right to control their own body. Each local organizing group can decide the approach and focus of their particular action — a march, a Zoom conversation, a film showing — you name it.

There has been an exciting response from groups and individuals around the country who want to be part of this effort. Together, we have shaped the following demands and focus:

Please talk to your group about coming on as an endorser. Endorsers are asked to support the demands, publicize and promote the campaign, and participate in a local action to the best of their ability. Download the endorsement form here and send in as soon as possible. Endorsers to date include: Central Phoenix Inez Casiano NOW • Freedom Socialist Party • H.O.T.D.I.S.H Militia (MN) • Illinois NOW • Minnesota NOW • New Mexico Religious Coalition for Reproductive Choice • Organized Workers for Labor Solidarity (WA) • Oregon Coalition of Black Trade Unionists • Raging Grannies Action League (CA)

Join with others to shape and build a massive chorus of voices for reproductive justice on Sunday, October 3. Contact us to discuss the campaign and let me know if your group would like endorse and participate. We can be reached at: 206-985-4621 or radicalwomenus@gmail.com.

Campaign for an Elected Civilian Review Board Meeting

Join FSP at the monthly meeting of the Campaign for an Elected Civilian Review Board, a coalition of organizations and individuals fighting for the passage of the Community POWER Act, legislation in the NY City Council to establish a workingclass board and independent prosecutor empowered to hold police accountable. Email nycfsp@gmail.com to register for the meeting.