Bernie Sanders’ Bid for President: What Would Eugene Debs Think? 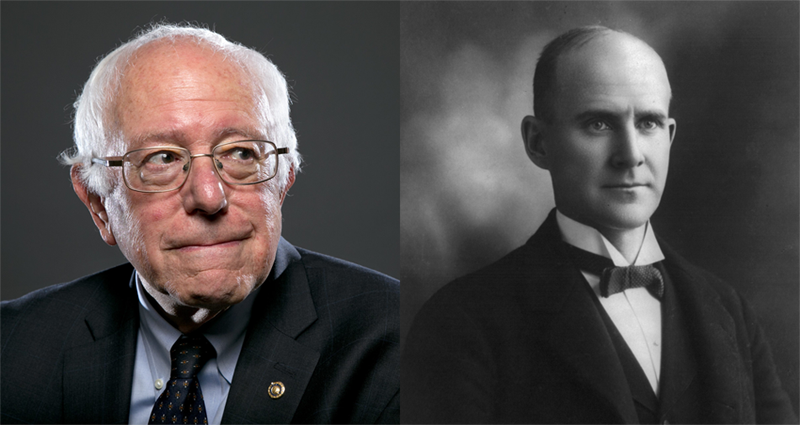 Sanders’ self-professed hero is U.S. revolutionary socialist Eugene V. Debs. As a Socialist Party candidate, Debs ran for president five times in the early 1900s, twice gaining over 900,000 votes. But Debs understood that workers and the poor need a party independent of the duopoly of power. In a 1904 speech, he said:

The Republican and Democratic parties … are the political wings of the capitalist system and such differences as arise between them relate to spoils and not to principle.

With either of these parties in power one thing is always certain and that is that the capitalist class is in the saddle and the working class under the saddle.

… The ignorant workingman who supports either of these parties forges his own fetters and is the unconscious author of his own misery.

In contrast, Sanders is running as a Democrat; he has chosen to hitch his wagon to the overlords in the saddle. He has promised to support whoever wins the Democratic primary. In Congress, he votes with the Democrats 98 percent of the time, and he consistently supports their presidential candidates.

His function in this election is the same as left-identified Democratic presidential contenders like Jesse Jackson, Dennis Kucinich, and others before him. It is to bleed off protest against the two-party chokehold over U.S. politics and to make sure that unionists and progressives once again vote — against their own interests — for a Democrat acceptable to big business.

And what about Sanders’ actual record? It’s seriously at odds with his image.

Wall Street — Sanders promises to reform Wall Street. But this can’t be done through tweaks such as taxing certain financial transactions, as Sanders proposes. Given the devastating power they wield over people’s lives, the banks need to be nationalized under workers’ control! Also, Sanders aims his anti-corporate fury almost entirely against Republicans, while giving a pass to Democratic friends of finance capital.

War — Sanders accepts the U.S. role as World Cop. In Congress, he has voted to fund nearly every imperialist military action by the U.S., from Iraq and Somalia to Afghanistan and Yugoslavia. He refuses to denounce Israel’s war on Palestinians, and endorsed the sanctions that killed over a million Iraqi civilians.

Labor — Sanders’ version of defending U.S. workers is of the jingoistic, “America First” variety. He points to immigrants and foreign workers as the source of job loss, rather than the bosses’ policies of speedup, automation, and the global “race to the bottom.” But, internationally, an injury to one truly is an injury to all! Even when it comes to U.S. workers, Sanders hasn’t stepped up to the plate when it counts. Earlier this year, he didn’t resist when the Democratic governor of Vermont, his ally, pushed through a budget that meant cutting hundreds of union jobs.

Civil rights — The Vermont senator has supported racist federal legislation, like Bill Clinton’s Antiterrorism and Effective Death Penalty Act, which props up the prison-industrial complex. He has not championed the Black Lives Matter movement or other groups aimed at ending police murders and the criminalization of youth of color.

In his campaign speeches, this supposed socialist generally has refused to pinpoint capitalism as the problem and socialism as the solution. While more and more voters are identifying their affiliation as “independent,” Sanders is headed in the opposite direction.

He excels at rousing populist oratory, but considers Hillary Clinton, warmonger of U.S. foreign policy, his “good friend.” Sanders is the man for the job for the beleaguered Democratic Party in these times of growing anger and dissent. Not as president, mind you, but as the latest in a series of perennial false hopes for a kinder, gentler party — and social system.

On the socialist Left, there are groups, like the Socialist Alternative of Seattle City Council member Kshama Sawant, who give Sanders direct or indirect support, ignoring or downplaying the ugly parts of his record and wishing away his longtime collusion with the Democratic Party. This is no way to build a movement for lasting fundamental change.

What would be productive is left cooperation rather than competition on the electoral battlefield. By joining forces, it would be much more possible to give people opportunities to vote for bold, honest, radical opponents of the profit system and its ravages at home and abroad.

A big part of any joint anti-capitalist effort would have to be challenging the tangle of state and federal laws that keep Left and independent labor candidates off the ballot. And a possible outcome of such an effort could be the launch of a new national party to defend working people and the oppressed. The Freedom Socialist Party is for a national conference that could discuss these ideas and get something moving. And the sooner the better! U.S. voters need relief!