Fighting for labor in the Trump Era 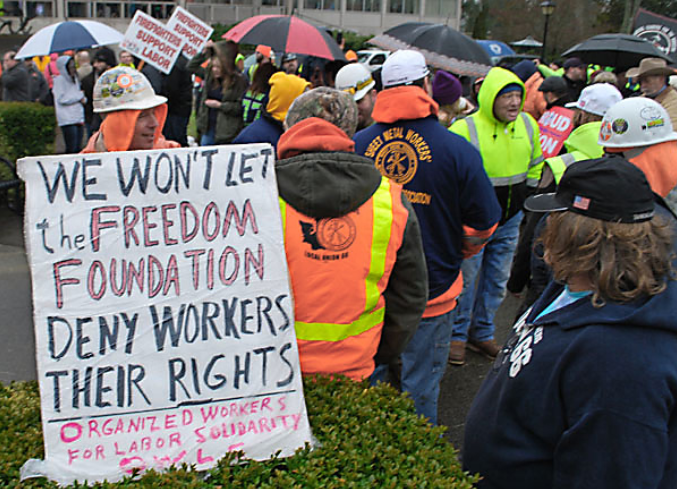 Washington state is quickly becoming a major front in the war over workers’ rights. The Freedom Socialist Party, as part of the militant cross-union caucus Organized Workers for Labor Solidarity (OWLS), is stepping up efforts to meet the challenge. OWLS is attracting seasoned unionists and young people new to organized labor through building a fighting response to anti-labor forces.

In January, with Donald Trump installed in the White House, OWLS hit the decks running. During Martin Luther King Jr. Day events in Seattle, OWLS founders Mark Cook and Maxine Reigel presented a workshop on “Fighting for Labor and Civil Rights in the Trump Era.” The room was packed and discussion wide-ranging.

The OWLS meeting the following week drew several new recruits. One was a Latino ironworker who is trying to organize his co-workers at a non-union construction site, where wage theft and unsafe conditions are common. The meeting ended with a motion, passed unanimously, pledging OWLS to mobilize against proposed laws promoting “Right to Work” (for less) in the state legislature.

Turning on a dime, OWLS did just that, organizing carpools to Olympia to testify against a bill that would enshrine the “open shop.” Such measures have led to a steep decline of working-class power in other states. OWLS has done important work in exposing the racist origin of these laws. An OWLS presentation on the topic was featured in the Freedom Socialist and the online newspaper of the Washington State Labor Council.

Said Patrick Burns, an FSP member and leader in OWLS, “We are on the move!”