For international working-class solidarity against war in Ukraine

Below is the Freedom Socialist Party statement of February 15 condemning what was then a possible war in Ukraine. Now that the Russian assault has begun, we reiterate: Between the governments of Washington and Moscow, anti-war activists and the working classes of all the countries involved have no side to root for. Russian and U.S. hands off Ukraine and Eastern Europe!

Is war in Ukraine imminent, as the U.S. political and “intelligence” establishment insistently warns? Or does Russia have no intention of invading, despite its massive military buildup on the country’s borders, as Putin claims?

As of this writing, it is impossible to say, but each degree of ratcheting up makes an armed clash more likely. And, between Washington and Moscow, there is no one to root for in the mutual saber-rattling. Neither side has the interest of everyday Ukrainians — or their own working classes for that matter — in mind. Peace for the Ukrainian people demands that both governments must withdraw their military troops, trainers, and armaments from the region.

Inter-imperialist jockeying for power and position

Both Russia and the U.S. are seeking to gain imperialist ground through this grandstanding and potential war, with China and Western Europe also in the competitive mix.

The breakup of the Soviet Union in 1991 brought a new geopolitical situation globally. For some time, as Russia’s economy and standing nosedived during the ugly transition back to capitalism, it seemed to be a “unipolar” world, with the United States far ahead of the rest of the pack.

In recent years, though, this dominance has become increasingly challenged, as “upstart” countries scrape and claw to gain — or regain — spheres of influence in a precarious international economy.

In this escalating contest, the prize is control over not only Ukraine and its resources, but Eastern Europe as a whole. And the motivations are more than just directly exploitative and strategic. The economies of both Russia and the U.S. rely heavily on military spending, wherever it’s directed. Also, both countries are experiencing crises on many fronts, including falls in popularity amid mass protests over social and bread-and-butter issues. A distraction from troubles at home might have the potential to stir up nationalism that could benefit Putin or Biden — although it seems doubtful at this point that either leader could rouse much popular enthusiasm for war.

The role of NATO in all of this is much analyzed, but NATO is not so much an independent body as one more tool of U.S. imperialism abroad. It’s a Cold War institution that has lived on to support U.S. “security interests” around the world, including Washington’s devastating war on Afghanistan. A four-star U.S. Air Force general is NATO’s top commander, and the 40,000-strong multinational NATO Response Force reports to him.

Tragically, if this drama between once and current superpowers turns into war, European countries both East and West will be the battlegrounds, with all that means for their inhabitants. And the people of Ukraine, particularly, have certainly suffered enough of late. The civil war that ignited in 2014, largely provoked by Russia, is not completely resolved. Scattered fighting still claims lives after 29 attempts at a lasting ceasefire. Moreover, despite being rich in farmland and natural resources, the people of Ukraine are the poorest in Europe, thanks to exploitation, the ravages of war, and government corruption.

What role for socialists and peace advocates?

The Freedom Socialist Party believes that it is particularly important for concerned people in the United States to call out “our” government and media for the lies and distortions that aim to whitewash U.S. responsibility for the inflamed situation. Politicians and pundits continue to portray Russia as some kind of evil empire, evoking anti-communist tropes three decades after the fall of the Soviet Union. Meanwhile, they ignore the steady expansion of the U.S. and NATO military presence in Eastern Europe over the past 10-plus years, including right on Russia’s border.

On the other hand, there are leftists who see Russia, a former workers’ state and now an aspiring imperialist intent on capturing lost glory, as somehow worthy of defense by socialists and workers. The International Action Center (IAC), led by the Workers World Party (WWP), is one such example. While credit goes to IAC and WWP for taking action against the possible war, their perspective is blinkered not only when it comes to Russia, but also wrong-sighted and unrealistic when it comes to the United Nations. Along with other left and peace groups of various political tendencies, they call for resolving the conflict through the UN, another U.S.-dominated body with blood on its hands. The idea that bourgeois institutions such as the UN can be relied upon as a force for peace is an illusion, and a dangerous one for the anti-war cause.

No war but class war!

Today, capitalism is clearly unstable and unsustainable, even in advanced, wealthy countries like the U.S. This means that inter-imperialist conflicts will continue and intensify. Liberal pacifists who hope that solutions can come via negotiations among the powermongers are hoping in vain. It is a painful truth, but there can be no real resolution to conflicts like the one in Ukraine short of socialism.

And time is short. War threatens the planet no less than climate change. But the working class has enormous untapped power to avert disaster. By offering and strengthening international solidarity today, we can build the bonds that will help us end war between nations in a tomorrow not far off. Right now, it is up to workers, socialists, anti-war activists, and human rights champions to support the working classes of Eastern Europe in whatever way we can. It is their lives in the balance.

Russian and U.S. hands off Ukraine!


For a Socialist United States of Europe! 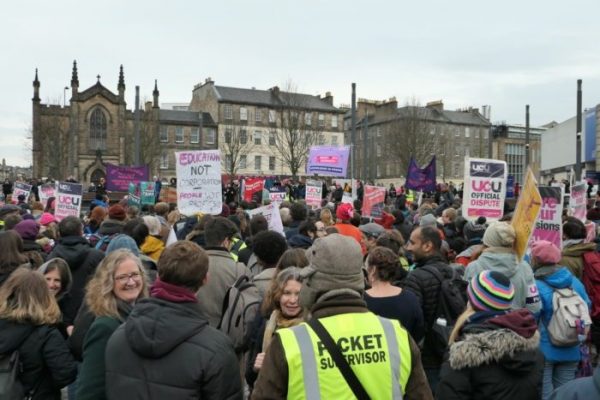