May Day 2013—Clara Fraser: Synthesizer of Marxism and feminism 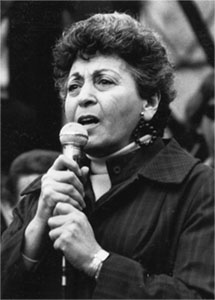 Fraser at a 1980 strikers rally of the Inlandboatmen’s Union, Seattle.“What better fate can a person carve out than participation in the emancipation of humanity?” Clara Fraser posed this question and answered it by living bravely, with commitment, relish and inimitable style. Fifteen years after her death, Fraser’s life still inspires. And her groundbreaking synthesis of socialism and feminism can be clearly seen as a breakthrough contribution to Marxist thought.

Fraser always insisted that she had not discovered socialist feminism. It’s true that all the great Marxists advocated women’s liberation. But it was Fraser who showed just how essential the dynamics of sex and race are to the fight for change in the current era.

The Permanent Revolution meets feminism. Beginning more than a century ago, socialists including Karl Marx, Frederick Engels, V.I. Lenin, Clara Zetkin, and Leon Trotsky showed that women’s emancipation was crucial to the struggle for socialism.

Still, many leftists regarded the “Woman Question” as divisive and secondary. Female leadership was discouraged and treated with condescension. These inflexible, conservative and largely male radicals were stunned by the social upsurges that began in the late 1950s. They regarded the explosions of people of color, women, students and queers as sidebars and aberrations from the “real” class struggle waged by white male unionists in heavy industry.

But Clara Fraser was not surprised. She had been paying attention to the political vitality of the second sex: female union militants like her mother, hard-working sister-comrades on the Left, and grass-roots Black civil rights organizers, who had been molded by their multiple forms of oppression into “figure[s] of independence, self-reliance, responsibility and resourcefulness.”

Indeed, said Fraser, “Feminism, the struggle for women’s equal rights, is always a powder keg of the class struggle.” She saw that the leadership of women — especially women of color and lesbians — would drive the whole movement forward.

Fraser explained that the race question and the woman question share a dual nature. Each is a unique problem with its own logic, history, and needs. But exploitation on the job connects both women and people of color to the class struggle. Women of color, in whom the threads of race and gender combine, are pivotally placed to clarify the issues and unite the movements.

This analysis grew from Fraser’s understanding of Trotsky’s concept of Permanent Revolution as a continuous and international process whose main force is the unmet demands of the most oppressed. These are inherently revolutionary demands because they cannot be met under capitalism.

Fraser recognized the outbreak of dynamic movements for equality as a feature of Permanent Revolution and a necessary solution to the problems of a conservatized and stratified labor movement.

U.S. unions were terribly weakened by the anti-communist witch-hunts of the 1950s that drove out radicals and civil rights advocates. The union bureaucracy largely rejected the movements of the 1960s and withdrew into collaboration with the government and subservience to the Democratic Party. This retreat has sapped the labor movement to the point where only about 13 percent of the U.S. workforce is unionized today. Youth, women and people of color, though they are together the majority of workers, are generally either outside the unions or are reduced to second-class status within them.

Fraser foresaw that “the very survival of labor organizations requires that a new revolutionary wing in the unions emerge. The initial impulse … will come from people and issues within the class but outside the unions.”

These rebels call on unions to shake off conservatism and go beyond limited economic demands to fight for reforms such as affirmative action and childcare. Such issues can not only mobilize labor but also radicalize it, by showing that every reform won under capitalism is temporary. As Trotsky phrased it, the demands of the most oppressed help working people “find the bridge between their present demands and the socialist program of the revolution.”

Journey of a leader. Clara was born on March 12, 1923, and raised in a multicultural East Los Angeles ghetto by Jewish immigrant parents. Her socialist mother was a garment worker and her father was an anarchist and truck driver. She worked her way through college and then joined the Socialist Workers Party (SWP).

She was lucky to be in the SWP’s Los Angeles branch while it was led by Murry Weiss, a brilliant theorist and writer, and Myra Tanner Weiss, a dynamic leader who stressed the importance of the Woman Question. The two were close collaborators with James P. Cannon, the founder of the SWP and U.S. Trotskyism.

In 1948, Clara moved to Seattle to assist the SWP local there. This branch became distinctive for its high level of activism in the midst of the McCarthyite 1950s and for its theoretical work on Black liberation. Along with a group of cothinkers in Seattle and Los Angeles, she helped Richard Fraser, her second husband, develop the concept of Revolutionary Integration.

This landmark theory demonstrates that the main direction of Black struggle in the U.S. has been toward integration and equality, not separation; that this aspiration can only be achieved through socialism; and that Black leadership and an onslaught against racism are crucial to unifying a working class divided and corrupted by white privilege.

Unfortunately, the increasingly bureaucratic SWP leadership rejected this revolutionary approach to Black liberation. In 1965, the SWP banned discussion of dissident views at its conventions, a death blow to democracy within the party. In January 1966, the Seattle branch resigned.

Birth of a new party. Within five months, the Seattle branch was reorganized as the Freedom Socialist Party (FSP) with a Trotskyist program of internationalism, socialist feminism, and Revolutionary Integration. Two years later, the FSP split over its first test of feminism in practice — the right of female radicals to be both activists and mothers, which the party majority affirmed.

For a short time during its early history, the FSP was an all-woman party led by Clara Fraser and her close colleagues Melba Windoffer and Gloria Martin. But that soon changed as a younger generation of men began to join.

To the predominantly male Left, the FSP was an aberration: a Leninist party led by a woman? Socialist feminism? No way!

Fraser was familiar with these attitudes: “Ever since feminists organized the modern movement in the ’60s, we have been harangued from all sides for being insane, unfulfilled, petty-bourgeois, narcissistic, frivolous, home-wreckers, strident bitches, dykes, man-haters, and enemies of civility and civilization.”

However, Fraser knew, revolution against capitalism requires a vanguard party to guide and unite workers. Despite the scoffers, she took on the mammoth project of creating such a party. This feat was made even more difficult because much of the Left gave the feminist FSP no credibility.

But Fraser excelled at the “continuous, consistent, and conscious building” that James P. Cannon described as necessary for forming a party to defeat the profit system. She stressed theoretical grounding, unshakable principles, involvement in the issues of the day, and an internationalism that recognizes the U.S. revolution as key to progress elsewhere. She emphasized James Cannon’s tradition of collaborative leadership, writing and publishing, class-struggle unionism, left regroupment and never, ever, giving up without a fight. Due to her skills, tough love, and example, the FSP has survived, flourished, and stayed true to its roots for 47 years.

Soon after moving to Seattle, she became a leader in a lengthy 1948 strike against Boeing, her employer at the time. She organized Seattle’s Fair Play for Cuba Committee after the 1959 revolution. In 1967, she and an unusual collaboration of women from the Old and New Left founded Radical Women (RW) to provide a feminist voice within male-dominated movements and to allow women to develop their own leadership in an autonomous, but never separatist, organization.

With Black women coworkers in the anti-poverty program, Fraser launched the battle for legalized abortion in Washington State. She organized for community control of the police and defense of the Black Panthers, participated in Native American fishing rights actions, helped win job protections on the basis of sexual orientation and political ideology, and provided a humanist Jewish voice against Zionism.

She was a creative strategist for numerous legal fights over the right to be radical. Of note: her eight-year-long sex and political ideology discrimination case against her employer, Seattle City Light; and the Freeway Hall Case, in which Fraser and other FSP leaders won the right of dissident groups to keep internal records out of the hands of political opponents and courts.

Fraser also reconnected with Murry and Myra Weiss and other former SWP leaders who had left the SWP as it degenerated. Together they initiated the Committee for a Revolutionary Socialist Party to seek left regroupment. Although this venture eventually foundered — the sticking point was feminism — Murry Weiss was tremendously impressed by socialist feminism and joined FSP. He contributed to the party until his death in 1981.

The socialist battle for a better world to which Fraser devoted her life continues on, decisively strengthened by her legacy. Those who follow in her footsteps will find, as she did, that “the act of fighting injustice is full of hope and joy … an innate historical tradition, an ancient reaching out for universal human fulfillment.”

2013 May Day Celebrations honoring Fraser as “The Original Socialist Feminist” will take place on Friday, May 3, in Los Angeles and San Francisco, and on Saturday, May 4, in New York and Seattle.