No business as usual: Trump’s triumph and what’s next

Going into the 2016 U.S. presidential election, the Democratic and Republican Party elites thought it would be business as usual. One member or another of the ruling political families — the Bushes or the Clintons — would be the next president and life in capitalist, neoliberal America would go on as it has for the last 30 years. The homeless and under-employed would live on the streets, college students would amass enormous debts, rents would be sky high, immigrants could be super-exploited, union membership would continue to dwindle, good-paying jobs would remain scarce — and all would be right with the country. 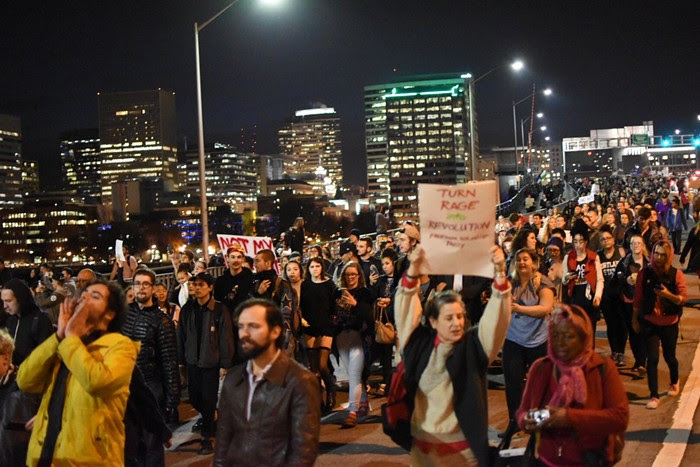 Jordana Sardo of the Freedom Socialist Party, in the foreground with sign, in Portland, Ore. on November 9.

As it turned out, they were wrong. The country didn’t want more of the same. People wanted something new, something angry, something or someone who acknowledged that things were very messed up in the “greatest democracy on earth.” Bernie Sanders’ campaign touched that chord but ultimately fell into line behind the Clinton throne. So Trump was the only alternative and people voted for him: a racist, sexist bully and billionaire populist demagogue, a favorite target of comedians.

But no one is laughing now. As pretty much everyone acknowledges, Trump didn’t “win” so much as Hillary Clinton and the Democrats lost (notwithstanding her success in the popular vote). After decades of being told by liberals, union leaders, NGO staff and various radicals that the Democrats were the “lesser evil” and worthy of a vote, working folk upended conventional wisdom and decided that Donald Trump was the lesser evil this time around!

And so it goes in a two-party duopoly where the voters have no party of their own to fight for them.

Among other things, this election showed how weak the influence of a decimated union movement has become. Now, as unions take a beating from far-right forces like the Freedom Foundation and the Koch brothers, it is do-or-die time.

The U.S. working class will not be able to escape the right-wing nightmare that awaits us unless we can create an independent labor party, one that will vigorously run candidates to oppose the corporate stalking horses, of both the Democrat and Republican variety. Working people desperately need a party of our own, and it will take a mobilization of rank-and-file union members, including a fight for democracy within unions, to make it happen.

A working-class political vehicle is needed to fight for the people Trump calls “the forgotten men and women” — the people sold down the river by the Democrats and left out of the anemic economic recovery. A labor party would give angry and fearful voters a powerful counterweight to the pull of demagogues who speak the language of dissatisfaction, mistrust, conspiracy, and scapegoating — the modern, Trumpite version of the rhetoric of McCarthyism.

The Republican and Democratic Party higher-ups are completely isolated from the suffering of ordinary people of every color and gender, every religion and national background. The Democrats could have taken a cue from the wildly enthusiastic reception given reform Democrat Bernie Sanders, but no. Both parties believed they could ignore the rumblings under their feet and continue on with business as usual. Now Trump has busted that illusion.

Some mainstream commentators are making the logical connection between Trump and far-right politicians in Europe, like France’s Marine Le Pen. Disgust with the bitter fruits of capitalist neoliberalism and anxiety over persistent economic crisis is global. Workers and marginalized people all over the world are looking for help, for real answers, for new and effective leadership.

What about the U.S. Left, which ought to be providing that leadership? Sadly it has a crisis of its own. This is the refusal to work together on things we agree on — to sit down, negotiate a common program, and create democratic united fronts that can defend the working class and the oppressed against reaction. This must change, now, not tomorrow or next year. Trump’s victory has given us an opportunity and we must seize it to create a strong anti-capitalist alternative outside the twin parties of capitalism.

Here is a partial action list of things the Freedom Socialist Party will be advocating and working on now and in the future. We urge you to join us.

These are initial thoughts. The Freedom Socialist Party will be holding public forums between Dec. 1 and Dec. 12 in Seattle, San Francisco, Los Angeles and New York City to discuss the meaning of Trump’s victory — and what next. Activists from other groups will also be speaking, and we hope a broad range of people will come and share their thoughts. Watch our website for details. We will also be offering more election analysis in the forthcoming Freedom Socialist – subscriptions are still half-price until Nov. 15.

The aftermath of the murder of George Floyd