“When our unions are under attack, what do we do? Stand up, fight back!” This was the chant from nearly a hundred activists greeting attendees at the Freedom Foundation’s swanky fundraising banquet Sept. 23 in Bellevue, Wash. 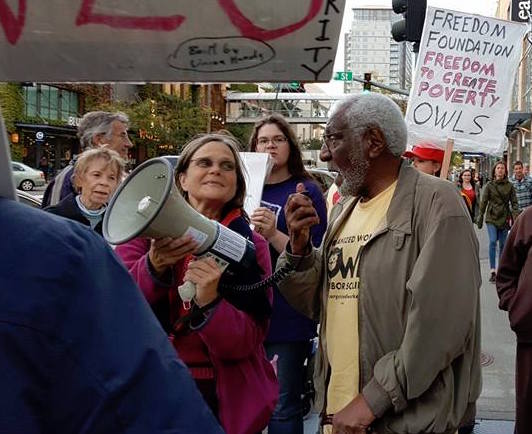 Organized Workers for Labor Solidarity (OWLS) called the boisterous picket and sidewalk rally, which included a healthy Freedom Socialist Party (FSP) contingent. The goal was to draw attention to the Freedom Foundation’s bid to get its hands on state public workers’ private information in order to expand its door-to-door union-busting campaign. The right-wing outfit has already visited the homes of numerous Service Employees International Union members in a disinformation campaign to convince workers to resign their union membership.

OWLS mobilized community organizations by educating about the foundation’s broader agenda: it opposes taxes on the rich, anti-discrimination and minimum wage laws, and environmental regulations, while seeking to slash public services.

On the disciplined picket line, spirits were high, with signs and chants revealing the ugly truth about the foundation. OWLS prepared for any attempts by cops or private security to limit free speech rights with its own security team of carpenter unionists decked out in red baseball caps and with the state constitution in hand.

OWLS will continue to organize, educate and agitate inside the labor movement for unions to defend themselves against the bloodsucking right wing and for working people to go on the offense against the “Freedom Foundations” of this world.