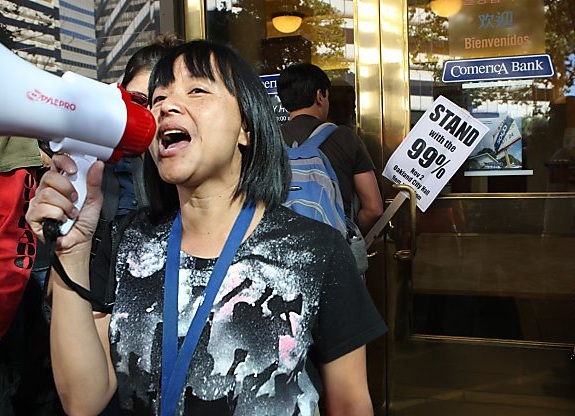 When neo-Nazi groups announced a rally in Sacramento this past summer, activists from around California responded. A Freedom Socialist Party (FSP) contingent from the Bay Area was there along with hundreds of other concerned community members, including Berkeley middle school teacher and anti-racist activist Yvette Felarca, to form a multi-racial counter-protest to white supremacist bigotry in the state capital.

Police took the offensive against peaceful anti-fascist demonstrators by shooting off tear gas and pepper spray even before the Nazis showed up. The cops then allowed armed skinheads into our crowd with impunity, and the fascists stabbed several innocent people, including Ms. Felarca. Anti-Nazi protesters reacted in self-defense, as they had every right to do.

Yet in an ugly Orwellian twist, the Berkeley Unified School District turned against Yvette upon receiving hostile threats demanding that she be fired for her off-duty activism. Management docked her pay and suspended her from the classroom. School officials even pulled Felarca’s students from class and interrogated them.

In the face of this harassment, another community resistance effort sprang up. Activists organized town halls in defense of Yvette, and her union filed a grievance. FSP supported Yvette’s reinstatement with full back pay, and defended her right to freedom of political expression. Due to concerted pressure, the movement won a crucial victory when Yvette was restored to the classroom in November. Ongoing efforts continue in this case, and those of other public educators targeted for speaking out against an emboldened right wing. ¡Sí se puede!