Victorious Protest Against Milo Yiannopoulos is Distorted by Media 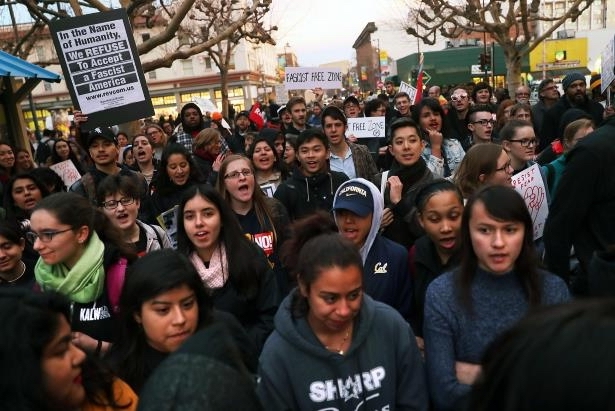 On February 1, the Bay Area branch of the Freedom Socialist Party got involved in the protest against reactionary agitator Milo Yiannopoulos at the University of California – Berkeley. A team of eight, including five FSP members and three supporters, joined the demonstration in conjunction with Labor Rising Against Trump, a Berkeley-based group that comrade Toni Mendicino is acquainted with through her job at the university law school.

Chances are you have heard that this protest was “violent.” But the truth is that the media deceitfully exaggerated the impression of chaos by focusing almost exclusively on the most destructive elements and the very few people who were hurt, when in reality almost all of the thousands of protesters were peaceful. We all know who really perpetuates violence – the right wing. But despite the bad press, the protest was actually a great success, as it forced Yiannopoulos to cancel his event!

In contrast to many other anti-fascists, FSP does not believe that the university should have barred the event from being scheduled in the first place. That would have set a bad precedent of administrative censorship that would surely backfire on the Left. Instead, we wanted to exercise our right to shut Yiannopoulos down by organizing mass opposition. That mission was accomplished! But while the university upheld neo-Nazi Yiannopoulos’s right to free speech, the school and media attempted to discredit the protest by myopically drawing the public’s attention to a few broken windows and by painting Yiannopoulos as a victim. This overshadowed our victory with an overwhelmingly negative narrative.

We simply cannot afford to let the media or university trample on our right to combat the kind of dangerous neo-Nazi ideology that Milo Yiannopoulos is spreading. Don’t believe the hype; we won the day!