Why We Confront the KKK

Reporting from the front lines in Columbia, South Carolina:
South Carolina was once a thriving center of the Southern slavocracy. No wonder that today it is a lightning rod for the unfinished battle against racism in the USA. In the last period, a white Charleston cop was indicted for murdering Walter Scott — unarmed and Black. An adherent of the Ku Klux Klan assassinated the Charleston Nine in Mother Emanuel Church. And public outrage forced the state at long last to take down its Confederate flag flying high in the state capitol. 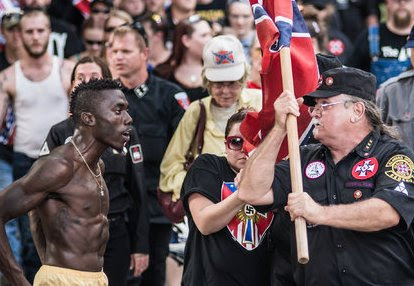 The Royal White Knights of the Ku Klux Klan considered this high insult and announced a July 18 rally at the South Carolina State House in Columbia. Neo-Nazis from Detroit joined their recruiting effort. Anti-Klan activists immediately started organizing counter rallies and a supporter from Columbia asked us for help.

In quick response, two of us from San Francisco jumped at the chance to go. We collected donations from friends and coworkers and traveled to Columbia to represent the Freedom Socialist Party (FSP) and Radical Women (RW). We were armed with a flyer entitled, “Why ‘ignoring’ the Ku Klux Klan sends the wrong message,”. Our two socialist feminist organizations have a long history of building united fronts to fight fascism, and this flyer shared what we’ve learned. We were proud to bring letters of support to the counter protest from our California public education staff unions — Teamsters 2010 and AFSCME 3299, as well as CWA 9003.

During our four-day visit, we talked with activists, churchgoers, trade unionists, students and people of all generations and colors. People understood the need to confront white supremacy whenever it appears. We learned more about the Southern struggle against racism, 150 years after the Civil War abolished slavery.

After decades of community protests and boycotts by the NAACP and National Collegiate Athletic Association, the racist Confederate flag was removed from the seat of South Carolina government on July 10. There was a lot of justifiable pride in the symbolic victory of the Confederate flag being furled. The KKK clearly hoped to recruit those upset about the flag’s removal. We’d heard that dozens of pro-Confederate flag rallies had been held across the South, signaling a growing movement of reaction.

Shortly after the KKK announced its rally, the Florida-based Black Educators for Justice, affiliated with the New Black Panther Party (NBPP), took out their own July 18 permit at the State House, and a local Methodist church added the call for a simultaneous Prayer Vigil. To discourage demonstrators, the media trumpeted claims that the NBPP and KKK were both “hate groups” and that the counter protest should be ignored. Governor Nikki Haley, the local NAACP and others also told people to stay away and let the Klan go unopposed.

At the suggestion of respected local activist and retired South Carolina AFL president Donna Dewitt, we contacted the state’s leading liberal/labor coalition. Unfortunately the South Carolina Progressive Network refused to endorse a counter protest. It fell into the “ignore them” camp, although individual Network and union members told us the coalition had missed an opportunity to both build on the flag victory and take an important stand against bigotry. Under pressure from elected officials, local church leaders postponed their prayer rally to the next day. 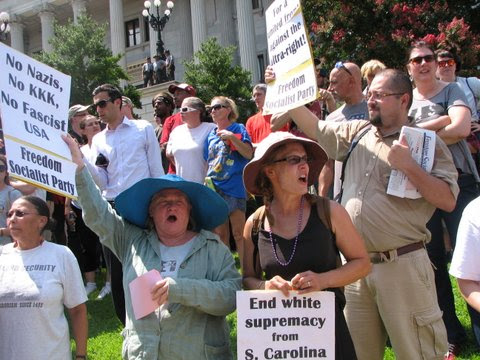 The community turns out

With our friend Phil Davis, a local Freedom Socialist Party supporter based in Columbia, we scouted out the State House grounds the night before the rally. Towering monuments to Civil War slavery defenders and segregationist Strom Thurmond sharply contrasted with the freshly dug up turf where the Confederate flagpole had stood just a week before. Yes, the flag had come down, but numerous statues and other symbols of Southern racism still stand.

The lack of local groups to provide leadership in this mobilization weighed on our minds as we gathered our picket signs and literature to head over for the counter protest. When we arrived at the Black Educators for Justice rally we were heartened by the crowd. We were warmly welcomed by the protesters, who were mostly local and African American. Some grabbed us in hugs and asked for more leaflets to share after learning we’d come from California to be there. The New Black Panther Party leadership, however, expressing the limits of cultural nationalist politics, wanted only African Americans and mainly men to speak at their rally. They turned down Nancy’s offer to share solidarity statements from three California unions and our national organizations, FSP and RW.

As the Klan and Nazis arrived, people from the small NBPP demo started streaming to the other side of the building. From a few hundred, our numbers quickly swelled to over 2,000 multi-hued counter-protesters, young and old. About 50 fascists thugs waving Confederate and swastika flags were escorted under heavy police guard to the State House steps. We were separated from them by a row of cops. Along with fellow union activists who liked our signs, we started chanting “No Nazis, No KKK! No Fascist USA!” to drown out their racist slurs. Cell phones captured our efforts.

Being in the thick of the rally was intense. It was hard to keep up loud chants in the sweltering 100-degree heat and humidity. People told us they’d showed up because the Klan was on the wrong side of history. There were calm conversations, shouting matches, and some fights all around us between the few Nazi skinheads and “rebel” flag-wavers in the crowd and the overwhelming majority there to oppose the KKK. Everyone cheered when a young Black man captured a Confederate flag and ran with it above his head through the crowd. Mainstream media coverage minimized the anti-KKK protest and a local reporter told us that they were also ordered to downplay the counter protest.

After just an hour the KKK was forced to abandon its own stage in the face of the spirited and much larger and louder counter demo. They were escorted out of the public grounds by lines of armed troopers, without being able to give a single speech. Protesters followed them into the streets to chase the bigots out of town. It was impossible not to enjoy seeing a Klansman crash his SUV into a pole while yelling racist epithets out the window.

A basis for future mobilizing

There was a deep sense of excitement among many who had turned out. We knew we were making history. As local activist Phil Davis said, “We confronted the far right — it’s the only effective way to limit their recruiting and to demoralize their ranks. I’m so proud of the Carolinians and our supporters who rallied today. I look forward to helping build a united front with others the next time the KKK comes to town.”

Though the Klan may have seemed pathetic on July 18, the white supremacist ideas spouted as Christian ideals by these goons are far from fringe concepts. Versions of these ideas are used every day by the super-wealthy elites — and their cops — who rule the world, in order to keep oppressed people divided and weak.

During our stay we also explored future collaboration including demands for reparations for slavery, teaching Ethnic Studies in public schools, fighting against right-to-work union-busting, and building the Black and Brown and Native Lives Matter movement. Let’s build on the victories in South Carolina and keep fighting for an inclusive, just and sane world.

Standing up to the Klan in Columbia showed us once again that solidarity is indeed awfully good for the soul!