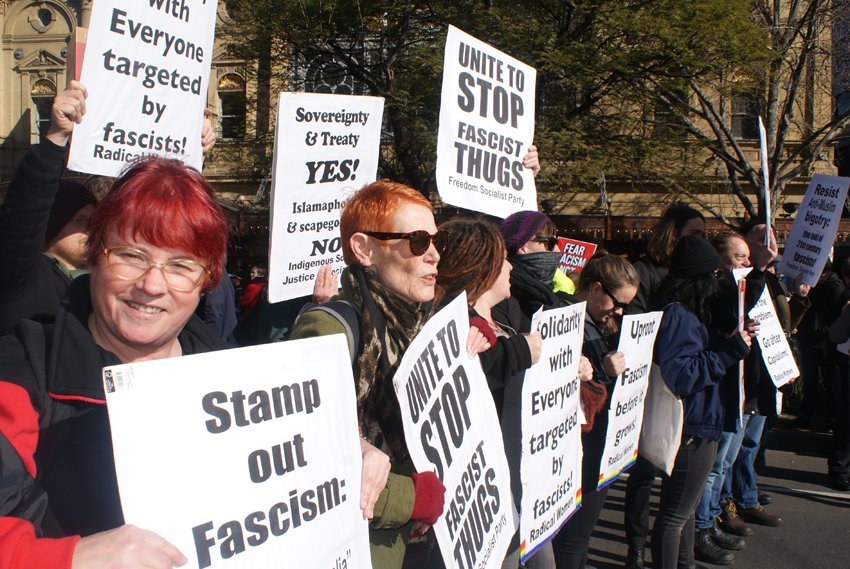 Enjoy highlights of Melbourne’s High Voltage Women book launch, held at the Electrical Trades Union. Filmmaker Kathy Sport brought together words from the speakers, audio clips from author Ellie Belew, slideshow images, responses from the audience and the lively vibes of the evening.

Online event: End the genocidal inaction! Implement the recommendations of the Royal Commission into Aboriginal Deaths in Custody

On 15 April 2021 it will be 3 decades since the Royal Commission into Aboriginal Deaths in Custody (RCIADIC) released its 339 recommendations. It found that key to the issue was the over representation of First Peoples in custody and recommended that imprisonment must be the last resort. Responsibility for implementing the recommendations is shared by federal, state and territory governments. While some measures have been implemented in some jurisdictions, governments have at best, procrastinated. The racial profiling by police and flagrant lack of duty of care by police and prison authorities continues and measures have been enacted which make the situation even worse! As a result, Indigenous imprisonment rates have increased and the deaths in custody continue to rise. Since RCIADIC made its specific and very necessary recommendations, more than 440 Aboriginal and Torres Strait Islander people have lost their lives in custody.

The Indigenous Social Justice Association Melbourne invites you to an online event to discuss the issues and build the movement to demand an end to the inaction which we characterise as genocidal.

Marianne Mackay is a Yoorgabilya from the Whadjuk Noongar Nation, a mother of seven beautiful children and lives in Kwinana. She has been involved in many campaigns including those around Aboriginal Deaths in Custody, refugee rights and uranium mining.

Trisha Penangke Moreton Thomas, an Anmatyerr woman is a writer, actor and film maker. She is a spokesperson for the family of the late Kwementyaye Briscoe, who died in police custody in Alice Springs in 2012.

Charandev Singh is a human rights advocate, educator and paralegal who has, for 28 years, worked with community legal centres and grassroots social justice organisations in Vic, NSW, Qld and WA with a focus on systemic advocacy, campaigning, deaths in custody, family violence murders, racialised punishment and State violence and impunity. Charandev is also an incredible photographer well known for visually documenting rallies.

Alison Thorne is a founding member of the ISJA-Melb who has been part of the grass roots movement to stop deaths in custody since before the RCIADIC was called. She’s written many pieces for the Freedom Socialist Organiser about how to end the genocidal state killings and is a Workplace Delegate with the Community and Public Sector Union.

Chair
David Harris is a core member of ISJA Melbourne. David is a longtime activist who is passionate about fighting for Indigenous Rights and addressing the on-going injustices of the invasion of this land to the First Nations Peoples.

Tensions between Australia and China are on full display with trade disputes causing economic chaos in some industries. This is accompanied by growing Sinophobia. In the U.S., there’s bipartisan support between both Republicans and Democrats to rein in an increasingly confident rival. As nationalism ramps up and the anti-China rhetoric grows more ominous, it is important for working people to understand China and to know where we stand and what to call for.

This study series will look at how the 1949 Chinese revolution became socialist, despite the stated goals of its leaders to throw off feudalism and colonialism and build a capitalist China. We’ll learn how the workers’ state that was created was gradually dismantled and capitalism, with all its contradictions, restored. We’ll examine the treatment of oppressed minorities and the dynamic leadership of women workers. We’ll explore the role that the powerful Chinese working class is destined to play, and prospects for forging international solidarity.

Starts Wednesday 10 February, 7 pm – 8:30 pm via zoom.
Session continue every second Wednesday until 19 May.
Registration essential for each session.

Hosted by the Freedom Socialist Party. Contact: freedom.socialist.party@ozemail.com.au for more information or to request a copy of the study guide.