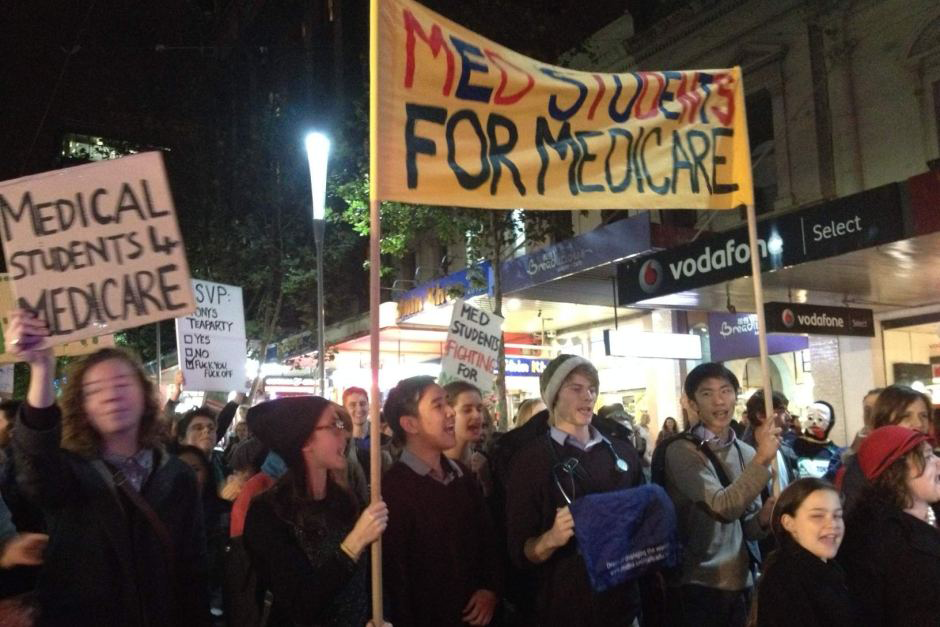 May 2014. Medical students were among over 2,000 people protesting the Australian government’s plan for co-payments on doctor visits. Photo: Freya Michie / ABC News

See more photos of the Hands Off Medicare rally at the FSP-Australia Facebook page.

Australians are about to lose a universal health care system they’ve depended on for decades. It’s being usurped by private hospitals and insurance agencies driven by the law of profit, not by the universal law Do No Harm.

Every day at work as a family doctor I know that I might need to refer patients in pain to a public hospital for surgery, because they can’t afford a private one. This means they’ll have to sit for months on a waiting list. Recently for example, my patient Ray came in. His leg is bent sideways from arthritis. His hip operation is finally coming up after 14 months. And this is quick!

To make matters worse, more and more clinics are starting to charge patients fees just to get in to see the doctor.

How have things come to this? For several years the Australian government has been steadily undermining this country’s rare universal public health care.

Advances and retreats. In 1972 the Australian Labour Party rode to power on a wave of popular mass struggle. Anti-war campaigns, youth radicalisation, feminist movements, Aboriginal movements and gay rights movements, amongst others, pushed for reform after years of conservative government. In 1974, the administration established the health care system “Medibank.” Its two planks were: 1) free treatment in publicly-funded hospitals; and 2) universal insurance for visits to doctors. Medibank provided a rebate to patients for doctors’ fees. At the physicians’ discretion the bill could be sent directly to the government and the patient paid nothing. This was called “bulk billing.”

Medibank was watered down by the subsequent conservative governments. In 1976 rank-and-file unionists pushed for Australia’s only general strike in order to stop cutbacks to Medibank. Union misleaders, including Bob Hawke, blocked the strike. But Hawke did not forget the angry union militancy that demanded public health care. As prime minister he reintroduced “Medicare” in 1983.

Medibank and Medicare both contained a fee-for-service structure to appease the doctors’ lobby. Practitioners could still charge a fee which the government rebate covered fully if the patient was bulk billed. However, they could charge extra and the patient would have to pay out of pocket. A fully nationalised health service would have meant no charges to patients.

This fee-for-service scheme, present from day one of Australia’s Medicare, paved the way for sustained erosion of free public health care.

Stepped up attacks. Prime Minister John Howard as leader of the conservative Liberal Party/National Party coalition further hacked away at universal health care during his term from 1997 to 2007. His regime reduced funding of public hospitals from 50 to 38 percent, and he actively promoted private health care in its place. In 2001 he introduced a 30 percent government rebate to holders of private health insurance. In effect, a subsidy for privatisation. Even the wealthy received this public money.

Poor people lose out. If you want your knee operation done in a private hospital there is minimal wait. On the other hand it now takes 337 days for 90 percent of people on the public waiting list to get their orthopaedic surgery. Some wait longer than a year. Low income people are stuck with an underfunded public hospital system. Rich people get preferential treatment.

Howard’s government also tried to undermine rates of bulk billing (free consultations) and introduce more costs for patients seeing their family doctor. There was a backlash by the community, and to save their skin the government introduced measures to increase the rate which has now come back up to 83 percent.

What’s happening now? The current conservative government is trying to erase the idea of universal health care and replace it with public health care as a “safety net” for poor people only. They’ve even changed the name of the department that administers Medicare from the Health Insurance Commission to Medicare Australia so we don’t think of it as a health insurance provider.

The government’s first scheme tried to introduce a system of co-payments for all patients who were bulk billed for visits to the doctor. Formerly these patients would not have paid anything but under this measure they were to be charged even if they were impoverished and on a pension. Concerted community grass-roots action, supported by nurses and public sector unions amongst others, pressed the administration to withdraw the legislation in 2014. Then government succeeded in freezing for four years rebate amounts paid to doctors for each service. This means a real decline in incomes for doctors, who will start directly charging more patients rather than bulk bill the government. So more sick people will have to pay to see the doctor.

Not surprisingly, a survey in 2013 found that more and more people put off seeing their family doctor because they can’t afford to. This is especially true of women, people of colour, First Nation Australians in regional and remote areas, and immigrants. First Nation Australians have on average a 12-year lower life expectancy than the rest of the population and are twice as likely to be admitted to the hospital, because they cannot see doctors for preventive care.

After years of relentless attacks, Australia already has higher out-of-pocket medical expenses than any developed country except the United States. Public hospital funding has been deliberately reduced and the private system expanded. And fees for service gives government a chance to slash rebates to doctors and increase costs to patients.

Health care in Australia, just as in the U.S., needs to be socialised and driven by working people, not the capitalist class. The only just system is one of free, publicly-funded health care. We fought for it before and we can do it again.

Dr. Michael Clark is a general practitioner in the east of Melbourne. He can be reached at michael.clark65@gmail.com.