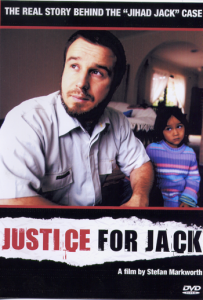 The film, Justice for Jack, by independent film maker Stefan Markworth, makes chilling viewing. It exposes the injustices which are already happening under the first version of the Howard Government’s anti-terror laws. It shows an ordinary Werribee family, the Thomas family, whose lives have been turned upside down.

This is the story of a young Australian Muslim convert, Jack Thomas, who currently faces the threat of 55 years in jail. The film opens with a flashing collage of the media coverage of this case. Thomas has been vilified in the media and subjected to appalling stereotypes. The media named him “Jihad Jack” and this name stuck so effectively that it was even a question on Who Wants to be a Millionaire!

Why is Jack Thomas facing 55 years in jail? Through interviews with Jack’s family, his lawyers and civil liberties and campaign activists, this film puts a powerful argument that the government needs a home-grown “terrorist” in order to create and maintain a climate where it can destroy all of our democratic rights.

The charges against Jack Thomas are based entirely on a single interview, extracted from him in 2003 under torture in a Pakistani military prison. After this ordeal in Pakistan, Jack returned to Australia and tried to get on with his life as a worker and a father of two young girls. But in November 2004 he was arrested by the Australian Federal Police and charged with receiving funds from a terrorist organisation, providing support to a terrorist organisation and travelling on a false passport. The prosecution rests on the Pakistan interview, which was conducted without Jack being allowed access to a lawyer, despite his repeated requests. The evidence from this interview would not be admissible in a regular criminal case: it would have been considered contaminated because of how it was collected. Jack Thomas’ lawyer, Rob Stary, gets to the essence of the issue when he says, “the rules seem to have been thrown out the window.”

In Justice For Jack we see that it is not only Jack who is being intimidated, his lawyers are, too. On the first day of Jack’s hearing, community radio station 3CR was raided in a hunt for the copy of an interview with Stary.

The focus of the film is to show the human face of Jack Thomas in a bid to neutralise the stereotypes that present him as a sinister figure. We also see the strength and determination of Jack’s Dad, Ian, and his Mum, Patsy. Patsy Thomas sees the treatment of her son as the modern day equivalent of 1950s McCarthyism when the public was taught to fear reds under the bed. While much of the emphasis is on the family, we see snippets of the broad support for the campaign being mounted to defend Jack. These include a fundraising lunch to assist with the debilitating legal costs and Justice for Jack T-shirts being screenprinted in a backyard workshop.

The analysis largely comes through in the interviews with Brian Walters from Liberty Victoria, Rob Stary and Jack’s brother, Les Thomas, who is leading up the campaign. Les, himself a socialist and atheist, highlights how the treatment of his brother is part of the Howard Government’s willingness to trample on the basic civil and human rights of us all in the name of the “war on terror.”

Justice for Jack is an important resource which needs to be screened widely as part of the campaign to build a mass movement to defend our civil liberties and democratic rights. The film, in DVD format, is available for $15 from New International Bookshop at Trades Hall, Carlton, or by contacting Les Thomas on 0409-399-429. Jack Thomas’ court case is now scheduled to be heard in late January 2006.