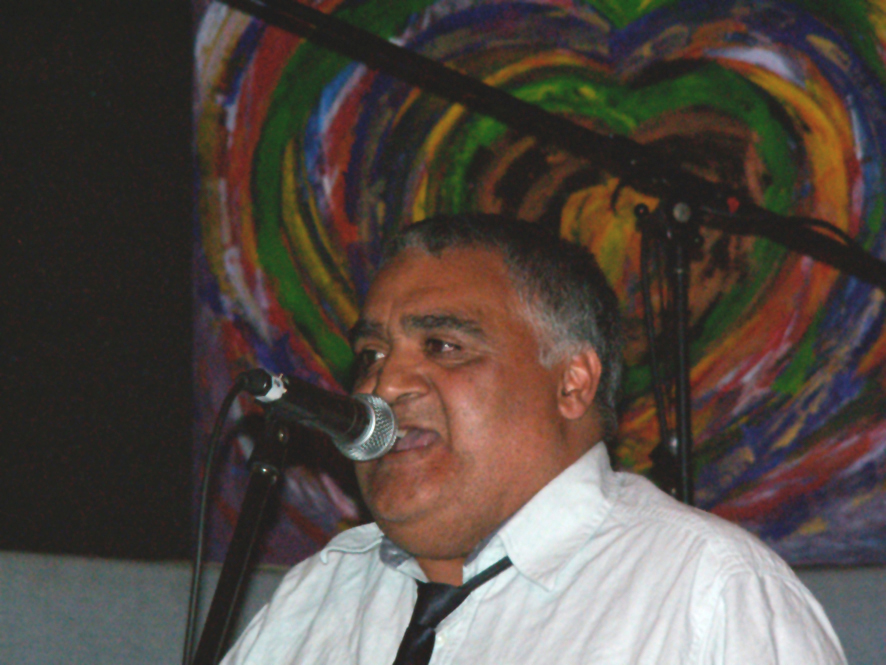 Koori Jack performs at the launch of his CD

John Walker records and performs as Koorijack. In April, he launched a CD, A Place We Call Our Own. Alison Thorne caught up with him to discuss life, music and the struggle.

I was born in Echuca, from the Yorta Yorta clan. When I was about 18 months old, my younger brother and I were fostered out. We lived in the Mallee and then we moved to Ballarat in 1970, where I have lived most of my life.

I was always aware that I’m an Aboriginal person. In the mid ’70s, during my teens, I began looking for my family in order to get a bit of closure. We met another brother we have, and later my cousins, Uncles and Aunties. My natural parents had died some years earlier, and I never met them. It wasn’t until 1993 that we found our youngest sister, Cheryl.

I began song writing in the early ’80s. I was in a heavy metal band called Tabu. I was the only Koori lad in the band. Most of our songs were originals. Tabu made three recordings over a four-year period.

I have performed and recorded with other groups, too. In 1998, Christine Ward and I produced a CD called Nirnoma Munera. That is Yorta Yorta for Rainbow Thunder. Then I was in a Koori music group called Ermarra. We made two recordings. It was a lot of fun.

A Place We Call Our Own is my first solo CD. I received a grant from the Melbourne City Council for $8,000 to record and produce it.

The name Koorijack is a name I initially came up with for my email address. Then people began calling me Koorijack. So I kept it as my musical name.

One song on the CD is called TJ Hickey. I wrote this song just after TJ’s death in Redfern. I was angry about the way the government, the media and the police were responding. There were so many lies. There was also a lot of community outrage. I was getting upset with the government, so I picked up my guitar and out came these words. It was the story of what happened, and the song just came out.

I remember the protest rally in Melbourne in February 2005. It was 12 months to the day since TJ’s death. We marched to the Melbourne Remand Centre. I sang my song along the way without a guitar — that was a challenge. I stood on a truck on the corner of William Street and Bourke Street with a microphone in my hand, and I just belted out the words. Everyone loved it, and I was glad to have done it — timing was everything.

It took me a while before I recorded it. But whenever I played it to people, everyone said, “Record it!” With the CD grant, I was finally able to get a band behind me and record it.

Then last December I flew up to Sydney to meet with Gail Hickey, TJ’s mother, about the song. We met at the Redfern Community Centre, and I played the CD. After we played the song. You could have heard a pin drop. I didn’t know what sort of response I’d get, but she loved it. It was a very emotional time for all of us. I gave her a few copies to keep. It was great to meet her and a relief to get her approval.

I want to raise awareness of the issues we’re all fighting for and the need for social justice. As the TJ Hickey song ends, it goes “no more deaths in police custody” over and over like a chant until it fades out. That is what the song is about.

When I first played the TJ Hickey song on community radio stations 3CR and 3KND, the phones lines lit up with people wanting to get a copy. It was amazing. The CD is in memory of T J Hickey.

Midnight Oil, Peter Rotumah, The Warumpi Band — just to name a few great performers — get their message out through music. A lot of Koori songs have political messages and spiritual meaning to pass on to young and old. I reckon music is a great medium — one of the best in the world.