in Brassed Off and In The Name of the Father, takes an outback trip through Western

with Postlethwaite’s journey to learn about the oppression of Aboriginal Australians,

makes for a dynamite documentary.

The story begins when Postlethwaite visits Perth to perform in a play. He reconnects

with a childhood friend, Bill Johnson. The pair had been in a British seminary together,

and both later left. After Johnson married, he adopted an Indigenous boy. Postlethwaite

learned that the boy, Louis Johnson, had been murdered in 1992, when he was just 19, by

two young English immigrants out for some “racist fun.” In a taped confession to police,

one of Louis’s killers argued that it had not been his intention to kill Louis, only to break

his legs. Why had he done it? He answered openly: “because he was black.” 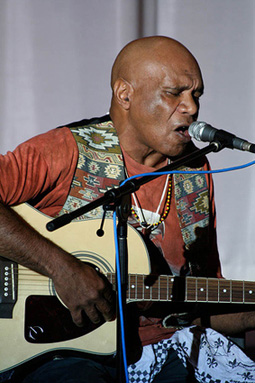 Archie Roach at the Sydney launch of
Liyarn Ngarn. Photo from ANTAR.

Pete Postlethwaite took the story home to England. He decided he wanted to return to

explore the legacy of British colonial rule in Australia. Roach and Aboriginal leader and

Yawura man, Patrick Dodson, became his mentors and guides on this journey. Liyarn

Ngarn, the film’s title, means “coming together of the spirit” in the Yawuru language of

the west Kimberley region. Postlethwaite is on a steep learning curve. He first explores

Louis’s story of being stolen from his family. The Johnson family had refused to bury

their adopted son until they found out his real identity. The Johnsons and his Indigenous

country. Postlethwaite then learns of the terrible legacy of Aboriginal deaths in custody

through the brutal deaths of both John Pat and Robbie Walker.

The travellers visit communities where elders tell them of their ancient, lasting

connection to their country and the struggle to get their land back. In one community,

they meet with a group of elders. Even though no objections to their Native Title claim

were registered, the legal process dragged on. Seventeen claimants had died, and still

Indigenous land in 1975. He also hears about Mabo, Paul Keating’s Redfern speech, the

rise of Pauline Hanson’s racist One Nation movement, the 2000 Sydney Bridge Walk for

The film was launched in Sydney on 22 August 2007, shortly after the Howard

gathering: “The intervention is objectionable and obnoxious. They assume that

Aboriginal people will accept whatever the government throws at them.”

The documentary is beautifully crafted. The conversations between Dodson,

Postlethwaite and Roach are thought-provoking, and the panoramic sweep of Indigenous

it an excellent introduction. But it is the music of respected song man, Archie Roach,

whose powerful lyrics transform the story into a journey of exceptional strength.

Ngarn. The first track on the album, “Little Sisters,” is a tribute to Louis Johnson. “To

never met. He hoped the song would help them through their darkness and pain.

Liyarn Ngarn is a powerful documentary. The deep connection between Dodson,

hope, but also a determination to be part of creating a solution.