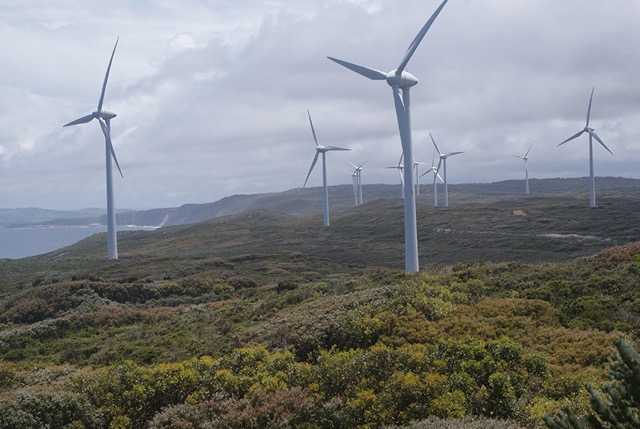 Australia’s energy networks are under severe pressure. Firstly, the gas network is at capacity and cannot deal with a further population expansion. Second, unchecked export of this natural resource means that domestic supply is under severe pressure, notwithstanding that Australia is soon to be the world’s largest exporter of gas.

Then there is the vulnerability of the National Electricity Network (the National Grid). Stretching from Port Douglas in Far North Queensland to Port Lincoln in Western South Australia, it is the planet’s longest electricity supply chain. But, as the South Australian blackout of September 2016 showed, it is vulnerable to severe weather events and lacks emergency backup. The country has enough generating capacity to supply current and medium-term future needs, but there are inadequate backups to ensure that the Grid can supply consumers. And the primary generation source is inefficient, dirty, obsolete coal technology. The energy supply system is an unsustainable shambles.

Irrational markets. It is not necessary to look overseas for the precedents for the precarious energy situation. Two examples from 1998 are eye-opening. In July, residents of the Sydney area were issued with an emergency “boil water” notice. The entire water supply was contaminated with potentially lethal micro-organisms. The precise source of the contamination was never fully resolved, but the evidence pointed to privately run water treatment plants whose contracts did not require them to filter out the micro-organisms. A short time later, the state of Victoria lost its gas supply after gross mismanagement at the privately operated Longford gas terminal. Nearly two decades on, the terminal is still operated for profit, despite becoming even more sensitive — the gas network is now interconnected through four mainland states and Tasmania.

These major outages were a clear warning that, when it comes to vital social infrastructure — not only electricity and gas, but water, sewerage, telecommunications and public transport — the capitalist market does not meet the community’s needs.

Yet regulators still allow profit to trump community needs. It is unacceptable that consumers are slugged with increasingly exorbitant power bills to prop up the profit margins of the generators and suppliers. It is unacceptable that so much gas is pumped into ships for export, meaning that the country faces a domestic gas shortage by summer 2018/19. Such a shortage would put the National Grid in jeopardy, because gas-fired power generators would fall idle.

Finkel tinkers around the edges. Dr Alan Finkel is Australia’s Chief Scientist. He and his team were commissioned to provide a “comprehensive review” of Australia’s future electricity needs (gas was not in his scope). Its 43 recommendations are openly aimed at reforming the electricity market. And there is the problem — it is beyond reform. The recommendations are uncontroversial, from a market point of view, and some are simply obvious, such as ensuring that new reserve generators actually come on line in a crisis. This did not happen in South Australia last year.

The report envisages coal being a significant contributor to the grid beyond 2050, dodging any backlash from the pollution lobby, but also ignoring reality. As made clear from the controversies surrounding Adani’s proposed coal mine in Queensland, major financial institutions have done their calculations and concluded that there is no return on investment in coal; it is nearly certain that no new coal-fired power generation will be built in this country. 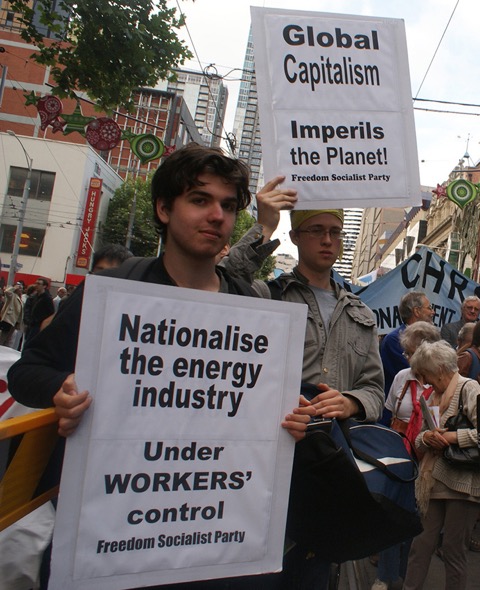 Raising ecosocialist solutions at the Peoples’ Climate March in 2015.

Speaking of tinkering, the Andrews government in Victoria wants to build a terminal to import Australian gas from Japan, because it is a cheaper and more reliable supply. But this plan is now obsolete. The Turnbull government has announced that companies will be forced to retain sufficient reserves for domestic use. This backdown was forced upon the Prime Minister for one reason: the certainty of power blackouts next summer when gas-fired generators ran out of supply.

Climate change and energy policy. Finkel tiptoes around the obvious issue of global warming. He does not ignore it, but relies heavily on the Paris Accords, a meaningless set of agreements that give the appearance of capitalist action on climate change while delivering almost no real action.

Real action is needed if the world community is to deal with the growing planetary emergency. But this must not involve cheerleading for one sector of capitalist industry over another. And it is pointless to seek reform of the chaotic and unplanned private energy industries. Renewable generation is crucial. But it is not the entire solution.

There is no reasonable argument against the conversion of the electricity grid to 100% renewable generation. In the medium term that would require some back-up from natural gas. The argument put forward that renewables cannot provide a “base load” is ridiculous. As the Finkel report notes, making the grid truly national by connecting Western Australia would help smooth out local variations in solar intensity and wind speed. Geothermal energy is woefully underused in Australia. Tidal generation is absent. Solar thermal (using part of the collected energy from solar panels to melt salt) is already a proven baseload generator in Spain. We have vast open spaces, unlimited supplies of salt and brilliant sunshine over much of the continent on any given day. And it is a very rare day indeed when there is no wind anywhere in Australia.

The development and use of these viable technologies has been suppressed by the loud, cashed-up lobbyists for the dinosaur that is coal generation.

And, as always, as the new technology is deployed, it becomes cheaper. Solar is already cheaper per megawatt than coal. So switching to this technology takes financial pressure away from households and small businesses.

Here’s a few ideas that would go a long way to solving Australia’s energy woes:

Nationalise energy industries under the control of their workers and the communities they serve. Phase out coal mining and generation at a rapid pace.

Implement a program of public works to secure the oil and gas networks against natural disasters and accidental damage. This would also provide ongoing, skilled employment for displaced coal industry workers.

Massively increase taxes on big business and billionaires to:

It is criminal that such a vast country with such huge resources has been raided for the profits of huge corporations, with very little return to the vast majority of the people. It is also criminal that this has led to a disproportionate contribution to world CO2 pollution by Australia, relative to population. The interconnected energy and climate change crises need to be tackled head on. Starting today.

Peter Murray, a passionate ecosocialist, is a member of the Rail, Tram and Bus Union.