Report from the streets of Washington D.C.: Resistance is on the rise!

On the eve of the inauguration, the Freedom Socialist Party and Radical Women contingent members met at the three separate locations where we were housed. We discussed the goals for the following days: talking to the people in the streets, spreading our demands and Socialist Feminist program, connecting with other activists, getting contact information for future organizing, selling the Freedom Socialist newspaper, and dealing with the cops and right-wingers. Knowing there was a potential for arrest and violence, we organized into trios in order to watch our partners’ backs and to keep the entire contingent together. 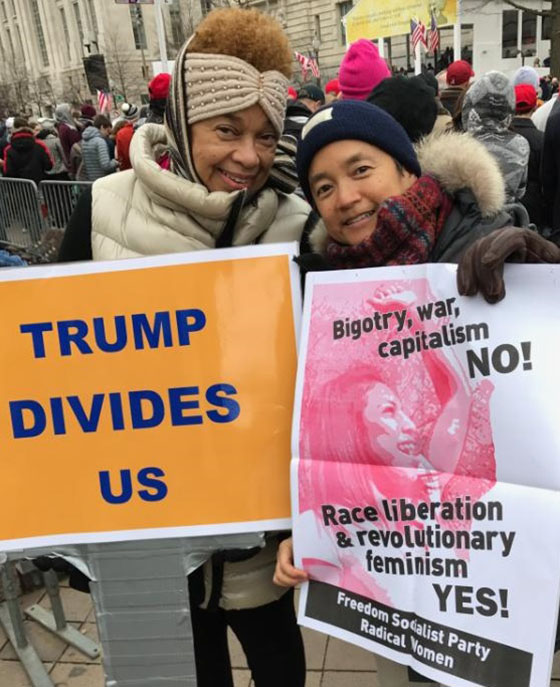 Inauguration Day had a distinctly grim tone. Our first stop was a feminist direct action attempting to shut down one of the security checkpoints leading into the National Mall. On the way there, a woman told the contingent that the police had already used pepper spray on the demonstrators. We supported the feminist shutdown action and talked to the demonstrators and the press. Later we attempted to pass through another checkpoint into a permitted protest inside the mall, but the National Guard and the cops were holding up the large group of protesters. We initiated a chant of “Let us in!” with the approval of the action’s organizers. Not much later the cops closed this checkpoint entirely. The contingent traveled through the streets chanting, acting as a magnet for other dissenters. We passed through a different checkpoint and positioned ourselves along the inaugural parade route amongst the Trump supporters. We bided our time until Trump’s motorcade appeared, then raised our banner and chanted at the top of our lungs “No Trump, No KKK, No racist USA!” Many of the Trump supporters around took exception to this, with one trying unsuccessfully to tear down our banner and getting physical with two contingent members, whom we defended. A good number of anti-Trump folks in the area joined our disruption.

The Women’s March the following day vastly outnumbered the inaugural day crowd. The mood was one of righteous fury and hopeful resistance. The entire route was packed with demonstrators so the organizers called an end to the parade because there were simply too many people to march! After this, everyone stayed in the streets and marched where they damn well pleased for the rest of the day. Many of the chants, signs and slogans asserted safety from sexual violence and demanded reproductive justice: “Not the church – Not the state – Women will decide their fate!” They also challenged virtually all of the new administration’s proposed policies. A popular chant was “Fight Back – No Fear – Immigrants Are Welcome Here.” The masses championed LGBTQ rights, Black Lives Matter, freedom of assembly, freedom of the press, responding to climate change, and so much more. Says contingent member Emily Woo Yamasaki, “To win the demands of the multiply oppressed will take a multiracial anti-capitalist movement with women of color at the forefront.”

Ultimately, the Socialist Feminist Contingent was exceedingly successful at accomplishing our goals. Our leadership emboldened others to take action. All of the copies of the Freedom Socialist were distributed to eager readers. When people asked what comes next now that Trump is in office, we provided the answer: a radical, democratic united front in which socialist feminists will help set an agenda to defend the working class and all the oppressed.

For more photos from the inaugural protests and the January 21st Women’s March, click here.

For media coverage of our involvement in the protest, see the Washington Post and CNN.

Open Letter on the November 3, 2020 General Election
Anti-fascist counter-protesters outnumber Proud Boys seventy to one
Massive Mobilization: The Only Sure Way to Defend the Election
Keeping alive my family’s socialist roots

It is precisely because the stakes are so high today that workers and poor folks cannot afford to give one iota of credibility to the Democratic Party.

Resolution for MLK Labor and its affiliates to defend democratic rights
workers
Open Letter on the November 3, 2020 General Election
elections
Anti-fascist counter-protesters outnumber Proud Boys seventy to one
anti-fascism
Massive Mobilization: The Only Sure Way to Defend the Election
elections
Why Socialist Feminism?
F.A.Q.
Donate
Radical Women
A revolutionary future is possible.
Help us build it. Join FSP