Ken Lovett Presente! Immense legacy for all with a passion for justice

The world is a better place today, thanks to Kendall Lovett. Ken exuded enormous energy and creativity as a community campaigner and movement linchpin who identified with all who are exploited.

Ken died peacefully at home in Melbourne, where he lived with his partner of 27 years, Mannie De Saxe. He was 98 and remained active until the end, responding to emails and sharing political news.

My earliest memories of Ken were in 1980. I’d travelled to Sydney to participate in the 6th National Homosexual Conference, which Ken helped organise. He was living in a small townhouse in the inner suburb of Woolloomooloo. His home also housed boxes of material, carefully organised for archiving — a lifelong tradition, which the Australian Lesbian and Gay Archives will long thank him for.

Ken was proud of his working class community. He’d been an activist with Residents of Woolloomooloo (ROW), which won the crucial support of the Builders Labourers Federation. A green ban, in place for two years, from 1973 til 1975, prevented the suburb from being bulldozed, gentrified and replaced with skyscrapers.

The ‘70s was an explosive period for Gay Liberation. Ken was in the thick of it from the get-go. After the arrests at the first Mardi Gras in 1978, Ken joined Gay Solidarity Group (GSG). He was arrested during the tumultuous campaign to drop the charges, which followed. The movement in this period was militant, liberationist and multi-issue. This was reflected in the refrain that rang out through the streets of Darlinghurst to “stop police attacks, on gays, workers, women and blacks.”

GSG drew the connections between LGBTIQ oppression and the struggles of all the oppressed — this solidarity was at the core of Ken’s activism. He was a voluminous letter writer. This included writing to gay prisoners, through the prisoner support group, Inside Out. Ken had a long correspondence with Tseko Simon Nkoli — the Black, gay, anti-apartheid activist who was diagnosed with HIV while in jail on treason charges. Nkoli became internationally known in the ‘90s when he went public about his sexuality and HIV status at a time when the stigma in South Africa was immense.

Ken’s commitment to challenging racism ran deep. He joined many marches to stop Aboriginal deaths in custody. In 1988, he rejected the gross nationalistic jingoism and joined up with Gays Against The Bicentenary. On January 26, “Invasion Day,” First Nations people from across the continent led the 40,000-strong March for Justice, Freedom, and Hope. Marching alongside Ken and the huge queer contingent with my FSP Comrades is one of my enduring memories.

In 1993, after Ken retired from his job with the consumer advocacy magazine, Choice, he moved to Newcastle. Then early this century, Ken relocated with Mannie to Melbourne. He had met Mannie, a socialist and anti-Zionist Jew, through GSG. In Melbourne the pair continued organising, carrying on the traditions of marching against war, in support of Palestine and for refugee rights. Ken made many unique banners, signs and a host of innovative protest artefacts. He was also a prodigious photographer. In the days before digital photography, when documenting rallies was more costly, he captured and carefully labelled many hundreds of photos.

As well as being regularly out on the streets, Ken was also a movement builder, contributing a great deal behind the scenes. This included community media. He was part of the Sydney Collective for Gay Community News. For 10 years, from 1983 to 1993, he produced the Gay Radio Information News Service (GRINS). He researched and wrote the scripts for this weekly gay news service — recording the bulletin each week and packaging and mailing cassette tapes around the country to be played on community radio stations, including 3CR in Melbourne and 2SER in Sydney.

Ken’s passion for feminism was legendary. He supported reproductive justice, frequently challenging anti-choice bigots. He also went nose to nose against the right wing, embracing many creative tactics. He was part of a duo that registered the trade mark Moral Majority in Australia ahead of a visit by Jerry Falwell in the ‘80s. He then designed a selection of bright yellow Moral Majority ™ stickers declaring support for a pantheon of radical causes! He also had a long record of protesting the vile Fred Nile!

He was a mainstay of the Sydney Park AIDS Memorial Grove (SPAIDS), and after moving to Melbourne, he helped push Northern Melbourne Institute of TAFE into re-opening the AIDS Memorial Garden at Fairfield.

Ken supported the work of the Freedom Socialist Party since our Australian Section was founded. He was one of the first Australian subscribers to the Freedom Socialist newspaper and kept his subscription current for almost 40 years. He wrote a piece for the Freedom Socialist Bulletin about the need to resist discrimination sparked by HIV/AIDS, and we published many of his photos. Ken never missed donating to our regular fundraising drives. Ken was always pleased to get behind socialist projects — the month he died, he and Mannie had a large sign outside their house, advocating a vote for the socialist candidate in the local council election.

We celebrate the life of Ken Lovett as one very well lived. He will be missed by many, but especially Mannie. His legacy will long continue to provide inspiration for all who have a passion for justice. 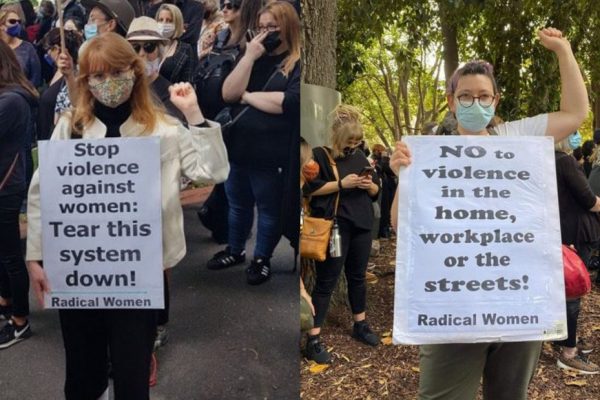