Freedom Socialist Party New Year’s Greetings for 2020: In anticipation of another year of global resistance

For all its difficulties and outright calamities, the year 2019 gave the workers and oppressed of the world a lot to celebrate. Mainly, international revolt on a scale unprecedented in recent history!

For every exploitative, inhumane or downright barbaric action by the powers-that-be, there was a resounding reaction by working-class and young people, often with women on the front lines. Around the world, from Chile to Lebanon, people rose up against corruption, the bitter fruits of neoliberalism, ethnic cleansing, destabilizing of the climate, and the arrogance and repression of authoritarian leaders.

Strikes in the United States and across the globe got real. Symbolic one-day walkouts were often replaced by bold, serious struggles, sometimes lasting for weeks or months. Internationally, one of the most compelling battles raged in France, where public employees were still out as the year ended. Strikers in the U.S. included 49,000 auto workers at General Motors, nurses in Ohio, copper miners in Arizona, and teachers in Los Angeles, Chicago, and across the country. In one week in October, over 85,000 workers were out. 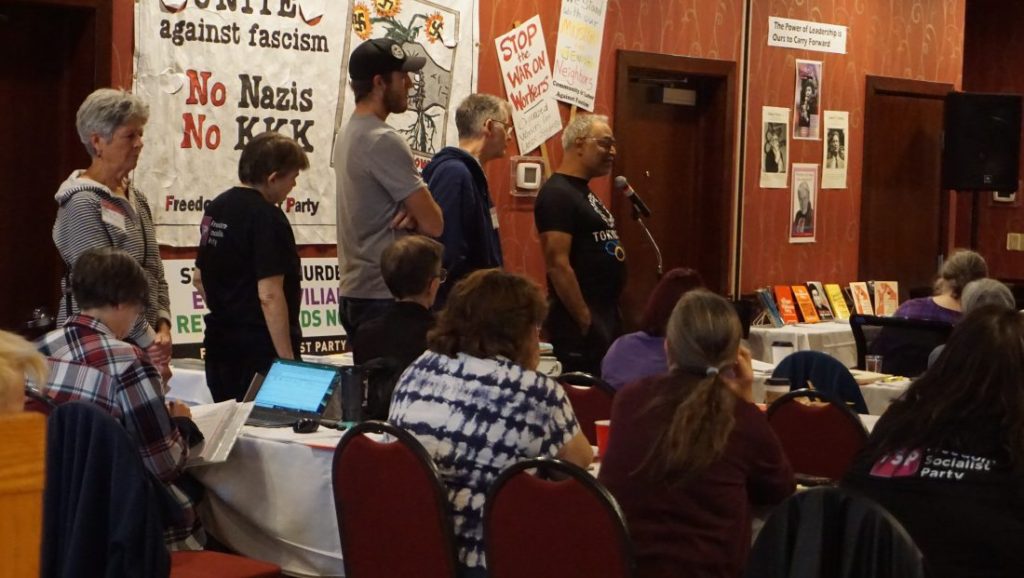 Workers stepped up not only over “bread and butter” issues, but over issues of justice, equality, and planetary survival as well. Employees at Google, Microsoft, Palantir, Amazon, Tableau, Whole Foods, and Wayfair protested their companies’ dealings with Immigration and Customs Enforcement (ICE), sometimes by striking. Thousands of big-tech workers organized an environmental walkout the week before the United Nations climate summit in September. And Microsoft employees petitioned the corporation to cancel a $479 million military contract and to end development of weapons technology. Issues of gender, race, sexuality, and the rights of indigenous people, immigrants, and refugees galvanized action in every hemisphere.

Nonetheless, wars continued to proliferate, seas continued to rise, and the far right continued to grow. The opponents of all of these scourges had plenty of courage and commitment. But too often one overthrown dictator was merely replaced with another; a valiant strike won only modest gains or went down to defeat; or a climate mobilization of hundreds of thousands failed to push the politicians to stand up to the fossil fuel profiteers. What was lacking? Revolutionary organizations prepared to lead a fight for revolutionary solutions.

The Freedom Socialist Party aims to be part of meeting this need. To this end, FSP belongs to the Committee for Revolutionary International Regroupment (CRIR), which is an expanding effort to bring socialists together internationally to collaborate on the major problems facing the world’s people.

Along with taking part in a productive, forward-looking meeting of CRIR in Mexico City in December 2019, FSP held its own rousing socialist feminist convention in the Seattle area in October. The overwhelming spirit of members was one of revolutionary optimism, based on the Marxist understanding that nothing is greater than the power of the working class once fully unleashed.

In the U.S., 2020 brings the quadrennial showdown between the Democrats and Republicans over who will take charge of stealing from workers and the poor to give to the rich – with the added complication of Donald Trump’s impeachment. But these exercises in capitalist democracy have very little to do with real democracy of, by and for the working-class majority. And that is the goal worth aiming for.

The best tribute we can pay to the brave insurgents and labor militants of 2019 is to continue their work and deepen it – to usher in a new year and a new decade dedicated to achieving the international socialism that people and the planet so urgently need.